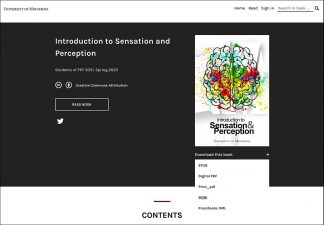 What happens when you assign your class to compile their textbook from open access materials? Something pretty good, says psychology Professor Cheryl Olman.

Olman had been working with the Partnership for Affordable Content Grant Program from its start, says Shane Nackerud, Technology Lead for Libraries Initiatives. Initially, the partnership found library licensed and open educational resource content for Olman’s class that students could read for free, and put those materials inside of a course reading list.

“When she was looking at materials we had gathered for the class,” he says, “she noticed we had found a lot of content in existing open textbooks.”

So when someone suggested crowd-sourcing through students a new textbook for “Introduction to Sensation and Perception,” she decided to try it. Nackerud notes: “It’s a unique way to engage your students and get them understand the content better and then actually produce something that future students can use.” By providing the Pressbooks application and assistance with understanding open licenses, the Libraries helped make this textbook a reality.

Asking Psychology 3031 students to create their own textbook was an intense request in spring 2020, Olman says. But fortunately, they had an advantage because of the way that Olman had supported students in the past. Previous students would tell her, she says, “You say so many things and we don’t know what matters and what doesn’t.” So Olman developed a detailed outline that, over time, became a one-to-one mapping of topical bullet points to exam questions for the course.

“That outline was the structure for the textbook,” she says. “Each week was a chapter.”

Students and Olman needed to be clear throughout what open access means and how a Creative Commons license works. That’s where Nackerud’s experience was useful.

“I was mainly able to help with licensing questions,” he says. “Sometimes a student would find some content and there would be a question: Is this actually openly licensed? Is this something we can re-use and put in?”

Olman adds that students faced another barrier: “Breaking that reflex never to copy and paste into something that you’re going to claim ownership over — it’s terrifying for everyone.” They had to ensure the rules of the license were understood and proper attribution made.

“It’s as good, in most places, as anything you’ll find anywhere. . . . It was just cool and a little bit magical, how easy Shane and Pressbooks made it to make a textbook.”

The students were good at finding openly licensed materials. “I found really amazing the skill that our students have for finding resources I hadn’t found yet,” Olman said.

Things could have gone wrong with the project. “But relying on open access materials and doing group work and fact-checking provided enough of an error correction system that I think the students can be proud of being the professor,” Olman says.

After spring term ended, the textbook project also hired two students from the course to work on the book during the summer. Nackerud taught them how to input their first portions of content into Pressbooks and display the information in their preferred ways. Kori Skrypek looked at copyright for all the selections, and Jarod Davis sought images to illustrate the textbook.

“It was interesting,” Skrypek says. “There were different amounts of work depending on which student had done the chapter.”

Davis said that finding images was, sometimes, the easier task. “There were examples I could pull from everyday experiences, something that’s easily visualized,” he says. But finding open-source images of such things as particular neurological pathways was not at all easy.

“I think it’s exciting,” says Davis, to have a textbook that he helped to create. Skrypek sees that the textbook may mesh well with remote learning this fall. “I hope it’s helpful to have something accessible and online . . . and open access information that is made to be shared is a really cool concept.”

Adds Olman: “It’s as good, in most places, as anything you’ll find anywhere. . . . It was just cool and a little bit magical, how easy Shane and Pressbooks made it to make a textbook.”

Says Nackerud: “I hope more instructors take this kind of leap. I think it can be very instructional for students outside of just the topic areas to learn about openly licensed materials, open-access materials, re-using content.

“They got another lesson in this course: the importance of open access materials for the dissemination and sharing of knowledge.”