The National States Geographic Information Council (NSGIC) has recognized the Mapping Prejudice Project with a Catalyst award. The project, which mobilizes volunteers to map racial covenants that barred non-whites from owning or even occupying property, last fall also received a Minnesota Governor’s Commendation.

Will Craig, former Associate Director of CURA, says the Catalyst award recognizes that Mapping Prejudice is “doing good and catching fire.” He notes how, among other things, the project changed state law so that racial covenants could be invalidated and also has influenced the Minneapolis 2040 Plan.

The award announcement noted: “The process of making that map — and the dataset that undergirds it — has proven a powerful vehicle for social change.” 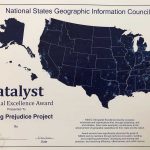 Mapping Prejudice was nominated by Dan Ross, head of the Minnesota Geospatial Information Office. He writes: “I believe [Mapping Prejudice] is truly serving as a catalyst to create awareness of racial covenants and where they occur, it is mobilizing people of all ages and backgrounds to map racial covenants, it is stimulating community conversations to help change the grand narrative by confronting structural racism, influencing public policy, catalyzing new community conversations, and inspiring new research not only in Minnesota but in other areas across the nation.”

The science of where

“The process of making that map — and the dataset that undergirds it — has proven a powerful vehicle for social change.”

“I think the award is a recognition of Mapping Prejudice having at some level a national impact, in advancing discussion of historic structural racism and how it pertains to the present,” he says, adding that GIS is the science of where “the project shows the impact that the science can have on communities and policy.”

Awards can be useful by inspiring other projects, he adds. The project recently received federal funding to refine the tools and methods used in their work.

Mapping Prejudice, Ross adds, “fits well with the conversation about race, diversity and inclusion that is going on across the globe and folks need to be aware of this good work that is catalyzing further positive conversation and action.”

And Mattke appreciates that “this kind of digital humanities focused research can also be recognized by the geospatial community,” opening researchers’ eyes to other possibilities.

Donate now to Mapping Prejudice Learn how you can help