By Emily Beck and Katie Minarsich

After the roaring success of our Tunbridge Cakes, and with no end in sight to working from home, we (Assistant Curator Emily Beck and student employee Katie Minarsich) decided to dive back into the manuscript recipe collection of the Wangensteen Historical Library of Biology and Medicine.

Perhaps feeling slightly overconfident, we decided to look for some celebrity guest judges. Thankfully, we managed to convince four University Libraries employees named Lisa (hereafter, the Lisas of the Libraries) to embark upon a journey of deciphering, baking, and eating a 1500s recipe for “French Cheese Cakes.”

The recipe we chose to make this time – French cheese cakes – was much trickier than the Tunbridge cakes we made earlier this summer.

To make french cheese cakes
Take 3 eggs & beate them well with as much fine
flower as will make them thick then put in
3 or 4 eggs more and beat them together & put to
it a quarter of a pound of butter & a quart of creame
set it on the fire & when it beginns to boyle put
to it your Eggs & flower, stirr it & let it boyle till
it be thick season it with salt, suggar, sinnamon
& currants & bake it shallow in fine paste
what fashon you please // finnis.

This recipe is interesting because it highlights some of the fundamental differences in the ways people cooked in the past, and the way many people cook today. Now, many people are accustomed to recipes that have very, very specific directions that leave little room for interpretation or customization. In the past, most cooks would have had a lot of tacit knowledge and would have been very comfortable reading basic directions and cooking largely from memory and their own personal preferences.

Like many early recipes, this recipe’s  relatively unclear directions left us with many questions:

How much flour and eggs do we actually need? How thick should the mixture be? How much salt, sugar, cinnamon, and currants do we need to use? How long do you bake the cheesecake? At what temperature? What is “fine paste”?

Because of the level of interpretation we needed to bring to this recipe, we thought it would be a very interesting one to bring to our judges.

Although our ingredients were the exact same, we both used slightly different amounts since the recipe didn’t specify quantities.

The initial part of the recipe, mixing eggs with flour, butter, and cream, was relatively straightforward. We both decided to mix the eggs with the flour, and then separately mix the other eggs with the butter. Things became more complicated when the mixture went on the stove.

What the historical recipe doesn’t say is that heating eggs and dairy, eventually adding flour and sugar and spices, is somewhat tricky. You have to watch your mixture very carefully, stirring constantly, in order to make sure you end up with a delicious custard instead of sweet scrambled eggs! This is how Emily interpreted the directions:

Heat the milk and butter. Whisk the eggs, sugar, cinnamon, and salt separately. When the milk mixture is about to simmer (little bubbles will appear all around the edge of the pot), add the hot milk in ½-1 cup increments to the egg mixture while stirring constantly.

Once you’ve added 3 or so cups of milk mixture to the eggs, you can pour the egg mixture back into the rest of the hot milk, and continue to stir. Doing this instead of heating the eggs with the milk and butter from the outset will help to ensure that you don’t accidentally cook the eggs separately from the milk, which would leave you with milky scrambled eggs instead of custard.

When the whole mixture is back being heated on the stove, add the egg and flour mixture. Stir constantly. The mixture will thicken considerably. You can test whether it is done by dipping a spoon or rubber scraper in the mixture and running your finger through it. If the mixture stays in place rather than pooling back toward the center, it is done.

Emily baked her cheesecakes for judging in 2 8”, shallow pie plates. There was enough left over filling for a third pie, but she baked it crust-less in some ramekins. Emily’s pie crust was James Beard’s pastry for a 2 crust pie, and Katie used a recipe from All Recipes. Katie sprinkled cinnamon on top of her cheesecake to make sure the flavor was pronounced.

Once the cheesecakes had baked, WHL Curator Lois Hendrickson headed to our homes for contactless pickup and delivery to our celebrity judges.

Introducing the Lisas of the Libraries 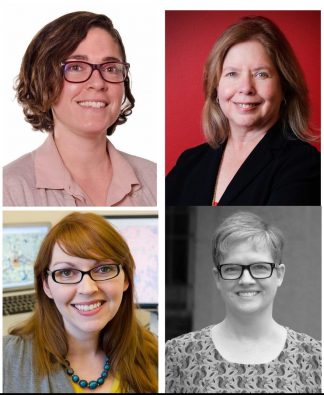 We were lucky to have four of the University Libraries’ Lisas to judge our historical cheesecakes. They bravely signed on for the task without even knowing what we would cook for them.

Lisa Calahan (top left) is the Head of Archival Processing in Archives and Special Collections.

In general, our judges were impressed with the fact that we’d managed to make anything edible from this recipe.

They took their role seriously, however, and helped us figure out how our different techniques and ingredient amounts affected the final product. Here were some of the takeaways:

Thanks so much to our celebrity judges, and their families who also helped with cheesecake analysis. Stay tuned for more Wangensteen cook offs!