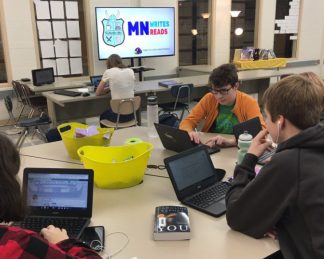 Primed with six novels, the creative teenager only needed an avenue to open to express her creativity. By the time Linda Mork of Minitex had completed her presentation on MN Writes MN Reads at Chaska High School last November, the teen author had published all six to the site and started pushing them out.

She is part of a passionate and sophisticated group of high school students. “She is not unique,” says Mork, a Minitex Reference Outreach & Instruction Librarian. “There are a lot of teens who are working on books, on novels.” And they find it easy to use the digital publishing environment offered by MN Writes MN Reads, Mork says.

Hers is among the 672 user accounts created through April 2020 on the Minnesota Libraries Publishing Project. The MLPP, the end of the no-cost publishing process for MN Writes MN Reads, has 744 sites — meaning books. Still, the platform is open to all Minnesotans and there’s room for more writers and readers.

Nationwide, self-publishing increased 40% from 2017 to 2018. Supporting those indie writers trying to improve the discoverability of their book and make a living is an important role for MN Writes MN Reads, says Sarah Hawkins, Project Manager for the Metropolitan Library Service Agency.

Indie author Sherry Roberts is a fan. She wrote an appreciation of MN Writes MN Reads, which is “dedicated to forging a bridge between indie authors and readers, encouraging writers to pursue their creative works, and enhancing the e-book collections of Minnesota libraries.” Above all, she celebrates the freedom for writers and readers that the program offers.

To recognize the best adult fiction and young adult fiction authors, MN Writes MN Reads is a sponsor of the annual Minnesota Author Project. The contest added a Communities Create category this year (submissions closed May 31). Indie authors who win regional contests are included in the Indie Author Project Select Collection on BiblioBoard Library at libraries across the country and can earn royalties on books published by libraries on other digital platforms.

A previous award winner is Sarah Hanley. She had written a WWII-era novel, Matka. Potential agents said the book was great but the category was too crowded, so they weren’t sure they could sell it. Hanley’s response? “Well, I can sell it myself; it’s my only book,” she says “It’s my pride and joy and my love.”

She self-published the novel and in 2019, she entered and won the Minnesota Author Project contest in adult fiction. It has opened opportunities for her. Since then, she has connected with readers around the country and fostered her relationship with MN Writes MN Reads. “I’ve felt a lot of support from them,” Hanley says. “I feel like they are part of my team.” Her second novel will be self-published soon.

For three years, sixth graders and their teacher Holly Siasoco in Minneapolis’s Marcy Open School have used the MN Writes MN Reads digital platform to create a book of their short stories. It’s a neat community creation story, Hawkins says. “The students can share with their grandparents or other family members from Roseau to Rochester, anywhere in the state. ‘You can read my class project online.’”

Creating a community cookbook based on recipes inspired by Because of Winn-Dixie, the One Book One Minnesota choice, is a MN Writes MN Reads project of the Lake Agassiz Regional Library, in the Moorhead area. “Especially when things are weird right now, as we are social distancing,” Hawkins says, “they are creating some community conversation and thinking of the library in new ways.”

And for students in Chaska and other high schools around the state, there’s a benefit in “teens creating this positive digital footprint,” says Mork. Because many public schools lack media specialists, Mork, a former teacher herself, targets teachers with webinars.

“We have these free tools,” Mork says. “They are so amazing, people love using them but so many people don’t know about them.” An educational consultant in northern Minnesota heard Mork speak and spread the word to teachers in the Bemidji area. Through similar word of mouth, Mork hopes to create interest and spark young authors in every part of Minnesota.

MN Writes MN Reads is grounded in openness to everyone in the state — to schools, libraries, communities, and individuals. Wannabe authors may want to brush up their skills with the publishing project’s second-most accessed book, Writing for Success, by University of Minnesota Libraries Publishing.

“Basically, the sky is the limit,” Hawkins says. “We are constantly innovating and seeing what people are creating in this space.”