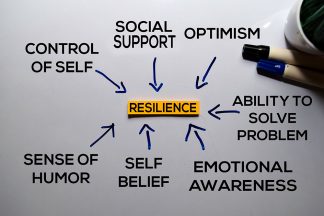 For University of Minnesota Libraries’ staff, stresses resulting from working from home were compounded by witnessing the tragic death of George Floyd and the protests that followed. Sensing distress, member of the Resilience Champions network in the Libraries are reaching out to help.

“During the George Floyd situation, everybody was feeling down,” says Chau Nguyen, Resilience Champion at Minitex. So she chose his killing and the aftermath for the topic at one of their weekly “We’re all in this together” support group meetings.

Coping with COVID-19 and its repercussions was the focus of an April 6 email from Content Services Department Resilience Champion Emily McLoughlin. “Right now we’re all dealing with a multitude of emotions — at least I am. It’s ok to grieve right now, it’s a normal process during a pandemic. Your feelings, no matter what they happen to be, are completely valid.”

Being aware that people are “incredibly stressed out” and responding with active listening, with the intention that individuals “feel understood and supported,” is one part of what Cody Hennesy is doing as Resilience Champion for the Social Sciences & Professional Programs.

The impetus for forming the grassroots group of University of Minnesota Libraries Resilience Champions in late 2018 was to offer an extra level of support as staff coped with preparing for a new dean. “Wendy [Pradt Lougee] had been in the position a long time,” says Ashley Alexander, Libraries’ Organization Development and Learning Associate, “so there would be a lot of change and uncertainty.”

Resilience Champions would be prepared to deal with possible stress among staff. In her training for the group, Alexander quoted from William Bridges: “The starting point for dealing with transition is not the outcome but the endings that people have in leaving the old situation behind.” In the last few months, the group has shown its resilience.

Resilience has been defined as the ability to bounce back, to adapt despite adversity. It has, Hennesy says, “been associated with grit or just like toughness. I don’t think that’s a great way to think about it. It involves paying a lot of attention to when you are having a hard time and letting that be difficult, paying attention to the emotions you’re going through. But then, how do you persist through that, and move forward in a positive way?”

Alexander found this to be true following the sudden shift to working from home to respond to the threat of COVID-19. “Especially in the first few weeks of the change, I was so focused on trying to put together resources to make the change as smooth as it could be,” she says, “I wasn’t realizing how worn down I was getting.”

Hearing messages of awareness of stress and the importance of self-care was helpful to her during the monthly Resilience Champions meetings. Alexander is the coordinator of the group of 12 informal leaders, some of whom volunteered and some of whom were asked to join.

“When you know someone has the same feelings you have, it makes it easier.”

Although the training prepared Resilience Champions to meet people one-on-one, that has not happened with Nguyen. Instead, Nguyen keeps the resilience issue in front of her department once or twice a week via email and Slack. Along with material from Alexander, the U’s Center for Spiritualty & Healing is a primary source for her to find resources to share.

“They like it,” Nguyen says of her co-workers’ reactions to her messages. “I always get positive comments.”

For the weekly “We’re all in this together” times, besides talking about George Floyd’s murder and the aftermath, the support group has focused on support for local businesses; older parents; home-schooling; job struggles and money woes; and the struggle is real — how are the extraverts doing? The fewer the participants, the better, Nguyen says, so “people can express how they feel.”

For McLoughlin’s outreach, being open about her own feelings — being vulnerable — has been important. “When you know someone has the same feelings you have,” she says, “it makes it easier.” She spends a good measure of time crafting each weekly message to her group.

In a June 5 message, she recounted how her stepdaughters, visiting from Wisconsin, asked about the destruction from fires that they saw.

“They had so many questions that I don’t think we knew exactly how to answer,” she wrote. “It’s very confusing to them. That’s some of my story. If anyone else wants to share, please feel free to do so.” Along with her personal stories, McLoughlin also includes links to webinars and other resources.

Casual conversations and a coffee group, along with sharing links and referring to resilience during department meetings, are important approaches for Hennesy. He’s talked with colleagues about how it is difficult to feel productive at home — and so different from in-person work. He also points out that for librarians on continuous appointment who are required to do research, publishing, and presentations, which requires some “mental space” — and who also have children to care for — this time of working from home can be especially stressful.

“How do you take care of yourself in that situation? What can you let go of, reasonably?” Hennesy asks. “And also, I think, letting it be difficult. . . . How can you get through that and find some joy and whatever silver linings there might be?”

And, as the Resilience Champions learned in their training, reframing a situation can be valuable. Reframing questions include: What’s interesting about the situation? What opportunities exist within the situation? What tools do you use to get through challenging situations?

Relying on reframing, active listening, self-reflection and other approaches have helped Resilient Champions reach out to support their colleagues during these challenging times.