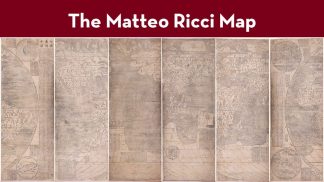 Call it cross-cultural, because this 400-year-old map uniquely represents East-West relations of the time. Created for China’s imperial court in 1602, The Map of the Ten Thousand Countries of the Earth is the result of collaboration between Chinese scholars and artisans of the court and European scholars of the Jesuit mission there. Matteo Ricci led the group of Jesuits, so it has come to be called the Ricci Map.

Call it precious, because there are only six known copies of the Ricci Map in the world. Now, through a gift of the James Ford Bell Trust, one copy has its permanent home in the University of Minnesota Libraries. “Our copy,” said Dean of Libraries Lisa German, “is the most accessible to the public, to students, and to researchers.”

Call it extraordinary, because the Ricci Map is the largest gift the Libraries has ever received.

The Ricci Map’s road to Minnesota

Marguerite Ragnow, Curator of the James Ford Bell Library, shared a vision with the late James Ford Bell Trustee Diane Neimann: “to see the Bell acknowledged as the world class library that it is.”

The James Ford Bell Library is the only library in the world dedicated to the history and impact of global trade and cultural exchange in the premodern era (before approximately 1800 CE). The Trust was set up in 1962 to support the library, which was started in 1953 with a substantial donation from James Ford Bell, founder of General Mills and long-time University Regent. It has grown from Bell’s original gift to more than 30,000 items.

Starting in 2007, Neimann led a search for items of distinction to add to the Bell collection. In 2009, she heard the Ricci Map was on sale by a consortium of book dealers. “She pursued the agent handling the map, Daniel Crouch, relentlessly,” Ragnow said. “That he and Diane became firm friends in the process says so much about Diane’s charm and personality.” After gaining the agent’s consensus but not hearing from his boss, Neimann tracked the boss to the tarmac on Heathrow and persuaded him to say yes.

After closing on the purchase for the Trust, the Bell Ricci was first exhibited at the Library of Congress in January 2010, and then later that spring at the Minneapolis Institute of Art, before coming to the James Ford Bell Library in September 2010, where it was introduced in a special exhibition.

The Bell Ricci Map has since been seen by members of the public, U of M students and researchers, and, fittingly, scholars from around the world.

“I know absolutely my grandfather would have been thrilled as well,” said Ford W. Bell, on June 16, 2020, as part of the U of M Foundation’s first-ever virtual signing ceremony for a deed of gift. Ford Bell and wife Amy Bell, Trustees of the James Ford Bell Trust, honored the perseverance of Diane Neimann by dedicating the Trust’s gift to the Libraries in her memory.

Bell also addressed the Dean of Libraries: “Lisa, I think the James Ford Bell Library is a point of pride for the University of Minnesota Libraries.”

The Ricci Map, said University of Minnesota President Joan Gabel, “is an enduring reminder of our global history and our relationship with one another.”

In a special thank-you video, Associate Professor of History J. B. Shank said, “to have such a rare and valuable object in the collection only adds to what is such a tremendous resource for the University of Minnesota.”

It gave her goosebumps to sign in a virtual ceremony the deed of gift for the historic Ricci Map, said University of Minnesota Foundation President and CEO Kathy Schmidlkofer. “I hope generations to come will have their own goosebumps moment . . . when they have a chance to see the world as others saw it.”

They should have that chance next year. The Ricci Map has been in storage at Mia following recent conservation work. Once Mia staff are back in the museum, Ragnow notes, the map can be moved to secure storage at the U. A new gallery is being designed for it in the Andersen Library for Archives & Special Collections, German noted at the event. “We expect to open the Ricci map again for viewing in summer 2021.”