Getting ready for remote access, work, and academic support has been a two-decade effort, says John Butler. 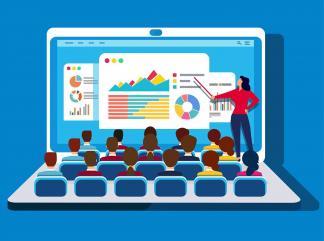 As easy as flipping a switch? To users, the University of Minnesota Libraries’ move to an entirely online environment may have seemed simple but — like wiring a huge building that is continually being remodeled — it actually is the result of years of efforts undergirding this new reality.

By February 2020, estimates John Butler, Associate University Librarian for Data & Technology, 65-70% of Libraries’ activities could be accomplished remotely. Then came the March 17 announcement that the U of M was closing library buildings and suddenly the Libraries’ staff and services were 100% in a remote working environment.

Even though some experienced stress — calendars filled with Zoom meetings, and librarians quickly responded to requests for online resources and e-materials — this transition was not a calamity. Indeed, the Libraries have been preparing for these changes for two decades, largely because Butler and others were aiming for a different goal: equity among learners.

Working for equity prepared U Libraries for working remotely

“It didn’t happen overnight,” Butler says of the infrastructure needed to transition Libraries online. “We’ve been moving toward this for years.”

In the current pandemic situation, one might assume Butler foresaw a dystopian future but, he says, he was “more on the utopian side. … It was all about equality of access.”

In the 1990s, he began examining distance learning, as it was then called. His studies revealed that faculty who were teaching distance learning courses would deliberately simplify these courses because they believed that students not on campus would lack library resources.

He and his team were awarded a Bush Foundation grant to explore the situation and possibilities for improving access to library materials.

“Our goal,” Butler says, “was to make it so there was no significant difference for distance learners.” For example, the person in the office next to a U librarian and the one in Roseau, Minnesota, would each have the opportunity for the same learning experience.

Butler had arrived at the U Libraries in 1987 in a fairly traditional librarian’s role – yet fairly quickly began experimenting with “early-Web” technologies similar to chat, screen-sharing, remote desktop control, and email to interact with learners.

“This was very novel at the time,” Butler says. “What we are doing right now is what we dreamed of.”

Along with Libraries’ long-term changes to improve distance learning, Butler credits the U’s Office of Information Technology under the leadership of Vice President for Information Technology and CIO Bernie Gulachek with recently making a major network upgrade and changes to software platforms — from WebEx to Zoom, from Moodle to Canvas — that helped prepare the U of M’s technology infrastructure for our current online environment.

The Libraries, Butler says, even though we were “stressed at the corners” by the rapid changes needed, are nonetheless “very well-prepared with an online service portfolio.”

One of the unexpected benefits of working from home, he adds, is that it removes barriers, bringing colleagues face-to-face via Zoom, and offering views of our home offices, our kids, and our cats and dogs.