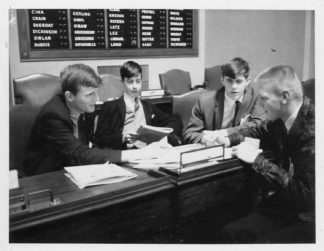 “Democracy must be learned by each generation.” This belief inspired the creation of the YMCA Youth in Government program.

In 1946, the program’s first year in Minnesota, high school students from across the state met at the Capitol Building in St. Paul to discuss and debate the issues affecting their communities through a model legislature. Over the course of the following 75 years, tens of thousands of Minnesota youth have learned about what it means to be part of a democratic society.

They have discovered their voice and power as they debated the issues that mattered, and some have gone on to serve as elected officials.

Politics of Humor, Humor of Politics: Comics, Graphics, and Illustration From the 18th Century to Now

The YMCA and Relief for War Victims During WWI