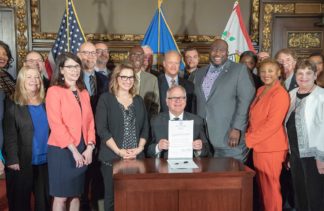 The Mapping Prejudice Project at the University of Minnesota’s John R. Borchert Map Library taps into a growing community interest to confront painful legacies of racism and to work towards a more equitable future.

The project aims to change Minneapolis for the better and its first legislative victory came this spring at the Minnesota State Capitol Building. Gov. Tim Walz signed a new law that allows Minnesota homeowners to amend their property deeds in order to denounce racist language that was added to many deeds in the early 20th century.

The new law came about because of persistent work by activists who were inspired and supported by the findings of the University Libraries’ Mapping Prejudice Project. Project leaders uncovered, documented, and mapped the systematic use of property deeds to enforce racial segregation in the Minneapolis area.

More than a million Hennepin County deeds were processed to reveal over 38,000 restricted deeds. These documents were then transcribed and verified by a team of six researchers and a volunteer force of 2,924.

According to Project Director Kirsten Delegard, “Libraries are the best incubator for new forms of research and scholarship that can serve the needs of our communities.”

“Minneapolis has some of the highest racial disparities in the country and I was interested in looking at the past to understand how we got to that place,” Delegard said.

This research question grew out of Delegard’s work with the Historyapolis Project, which she founded in 2013. Historyapolis brought history alive for the general public by using social media and other digital tools to share images, documents, and stories from Minneapolis’ complicated past.

When Delegard began searching the archives for evidence of racial disparities in Minneapolis history, she found a set of documents that had created a system of racial segregation starting in the early 20th century. These documents were housing deeds that included something called a racial covenant — a racist clause that restricted the sale of certain houses and lots based on a person’s race. White people could purchase, but Black and brown people were excluded.

Although racial covenants have been illegal since the Fair Housing Act of 1968, the racist language remains present in many housing deeds today.

It was clear to Delegard that these covenants were worth further research. As she saw it, racist housing practices enshrined inequality in the law, creating unequal opportunities that could have repercussions lasting well beyond the time period when covenants were enforced. Delegard imagined it would be possible to create an interactive map that would show the spread of racial covenants through different Minneapolis neighborhoods over time. Such an illustration would be dynamic and compelling — and critical for educating the public about a painful part of Minneapolis history that had remained hidden in a set of housing records.

Delegard contacted Penny Petersen, a local historian and author with decades of experience researching historic property records in Hennepin County. Petersen had relied on property records to plot the boundaries of Minneapolis’ long-forgotten brothel district for her book Minneapolis Madams: The Lost History of Prostitution on the Riverfront. She knew that Delegard’s proposed project would not be easy.

“I thought it was an intriguing idea, but an overwhelming one. I don’t think she was aware there are millions and millions of deeds and, really, where do you start?” Petersen said.

In addition to the overwhelming number of documents, Delegard’s project would also need some very specific expertise. The project would require someone with training in geographic information system (GIS) software to build a data visualization map that would show change over time.

Delegard found solutions to these difficulties thanks to the academic and community connections she had been fostering via Historyapolis.

Kevin Ehrman-Solberg joined Delegard and Petersen as a project co-founder. Ehrman-Solberg had been working with Historyapolis as an undergraduate student at Augsburg. His previous projects combined historical research and geospatial mapping. As Digital and Geospatial Director for Mapping Prejudice, he had the skills needed to create an interactive geospatial map based on the data.

Compiling those data would require a major research effort, but also presented an opportunity for community outreach and education. The project team hoped their work would have a bigger impact among local residents if they invited citizen researchers to participate. They created a Mapping Prejudice project on the Zooniverse crowdsourcing platform.

There, they uploaded digital versions of the property deeds and set up a system for training citizen researchers to verify the presence of racial covenants. The Mapping Prejudice team also held workshops and local events to train volunteers and drum up excitement for the work.

A home at the University of Minnesota Libraries

The John R. Borchert Map Library at the University of Minnesota provided an ideal home for the project. Ryan Mattke, Map & Geospatial Information Librarian and Head of the Borchert Map Library, brought a wealth of professional expertise to his role as Co-Director and Project Manager of Mapping Prejudice. Mattke has also pushed the project forward with partnerships and funding opportunities.

“Over the past few years we’ve been able to leverage our networks of researchers, partners, faculty, and students and also to get the resources to fund projects like Mapping Prejudice,” Mattke said.

Ehrman-Solberg continued his work with Mapping Prejudice as a graduate assistant for the map library. In his work to map the spread of racial covenants over time, Ehrman-Solberg has been able to analyze the significance and historical impact.

He noted that before 1910, the city of Minneapolis was not particularly segregated. After that, a big shift towards segregated neighborhoods occurred very abruptly as a result of racial covenants. Racial covenants created a segregated landscape that formed the basis for later policies and practices that specifically targeted communities of color and made it particularly difficult for people of color to accrue wealth through property ownership.

“We’ve learned that where freeway projects went was very deliberate — city planners intentionally ran them through African American neighborhoods,” Ehrman-Solberg said. “We now know that the presence of racial covenants prevented neighborhoods from becoming redlined. And we’ve also learned that the areas that were covered by covenants in the mid century are still the whitest and most affluent parts of the city today. So there have been very real, multi-generational impacts.”

Public History student and former project intern, Denise Pike, reflected on the personal and community impact of Mapping Prejudice. “This project really brings to light issues and explains a lot of things I’ve experienced in my life,” she said. “My hope is that it inspires other cities to do similar work. It’s a really powerful tool for helping people understand the situations we have in our cities today.”

Pike’s work on the project included curating the exhibit, Owning Up: Racism and Housing in Minneapolis in partnership with the Hennepin History Museum. The exhibit drew thousands of visitors to confront the city’s history of housing discrimination.

As a work of public history, the map is not the end point. It’s a stop along the way — an interactive learning tool that has the power to spark an ongoing community conversation and have a real impact on policy.

Mapping Prejudice has worked in partnership with Twin Cities Public Television on the production of Daniel Bergin’s Emmy-winning documentary film Jim Crow of the North. Twin Cities residents who have attended community outreach events and film screenings have recognized the importance of truth-telling through public history. Several expressed their appreciation for the project and their hopes for the future.

“This is important because this speaks to the disparities on every level that we have in our city, said Heidi Adelsman. “It speaks to why we have huge wealth accumulation gaps… we need to try to figure out how we can make a change by accepting that we are still living this history.”

“At this moment in time, we have the opportunity to do differently,” Noel Gordon Jr. said. “And as someone who’s younger, I think it’s particularly important for me to learn that history, so we can write a different chapter moving forward.”

Ryan Mattke noted that the Mapping Prejudice work is included in the City of Minneapolis’ comprehensive plan.

“We’re providing policymakers and officials with data that they need in order to plan communities in a meaningful way,” he said.

By bringing hidden data to the surface and making it accessible to the public, Mapping Prejudice is helping to change the stories that a city tells about its past and present. It’s offering local residents the chance to participate in research about their own communities. And it’s giving policymakers accurate information they can use to better understand the historical causes of economic inequality in Minneapolis.