Imagine a place where students from any college at the University of Minnesota can collaborate on an idea, develop and test a prototype, or practice their pitch for a competition. Many students crave this type of space, but find it lacking on campus.

Every day, innovation thrums at all levels of the University. Yet students observe that the Twin Cities campus doesn’t offer a centralized, neutral place for them to come together to explore concepts and flex their entrepreneurial muscles. Plus, many students don’t realize they have access to a full-spectrum of information and assistance to help them make and hone discoveries.

Thanks to a collaboration between the Libraries and the Carlson School of Management Holmes Center for Entrepreneurship, such a space will be open for business this fall on the East Bank. The Toaster Innovation Hub in Walter Library will provide students with an adaptable place to meet, collaborate, and take advantage of rich resources from the Libraries, the University, and the business community.

“For a number of years, students have expressed a desire to work more with students from other colleges and do more applied projects. But there wasn’t a mechanism to do that,” says John Stavig, Holmes Center Program Director. “That’s where we saw an opportunity, and it was very aligned with the mission of the Libraries to serve all students and develop a student-centric space.” 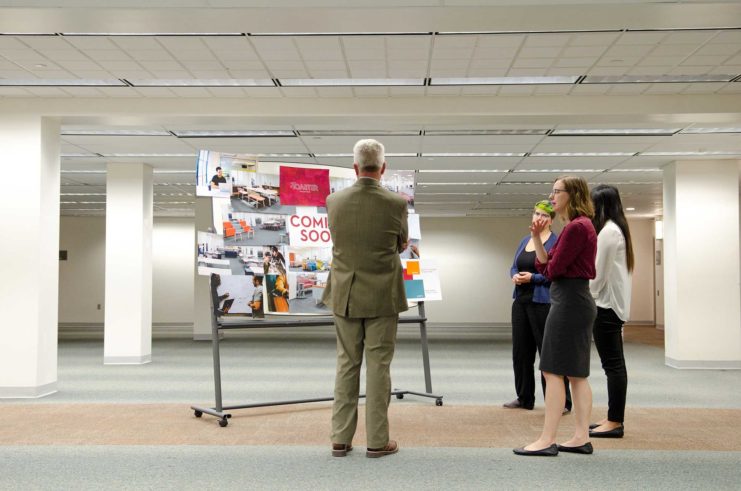 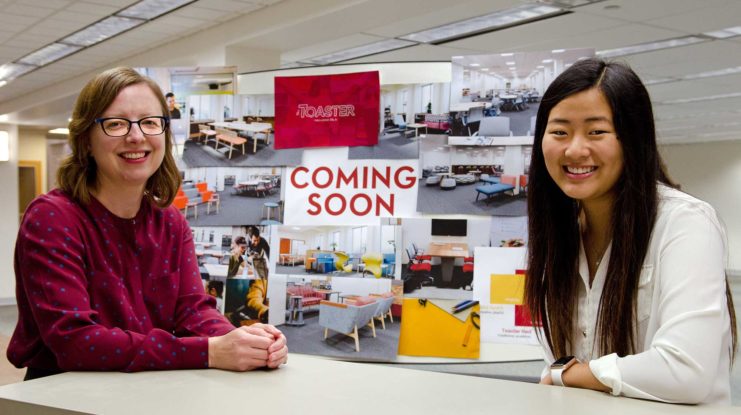 The Toaster will operate as a centralized hub for all things entrepreneurship, a one-stop shop where students may seek assistance and advice. It will be chock full of resources ranging from market research to intellectual property tips — essentially, anything students need to pursue creative ideas, projects, or initiatives for commerce or a cause. Students also can participate in workshops, connect with experts, and engage in networking or mentoring.

Carolyn Bishoff, Innovation Librarian and a physics, astronomy, and earth sciences librarian, sees great value in the Toaster. She starts with the fact that it’s a student-generated and developed idea that meets a practical need at the University.

“I was concerned early on that innovation spaces are a fad or fashionable thing to have. But the more I learned about it, I saw that these places give student entrepreneurs a professional space to meet and network,” Bishoff says. “The Toaster will connect students to resources on campus, whether it’s in the Libraries, interesting opportunities in the colleges, or with organizations on campus.”

Though many entities like Carlson and the College of Design offer programming about invention and entrepreneurship, there aren’t many mechanisms at the U for bringing together students from diverse disciplines. Encouraging interdisciplinary collaboration has been a goal of the Holmes Center, and the Toaster’s casual environment that welcomes all students is the perfect way to meet it, Stavig says.

To help foster connections, the Toaster will be staffed by two full-time professionals, says Danya Leebaw, Director of Social Sciences and Professional Programs. One will focus on outreach to find partners from across campus who want to collaborate with the Toaster, while the other will manage the space and work with its student ambassadors. Many other Libraries’ staff, Holmes Center staff, and partners across campus will also help operate the space and plan programming and events. In addition to professional staff, the Libraries and Holmes Center plan to hire a team of students who will lead activities in the space and help it run smoothly.

Inside the 6,500-square-foot Toaster, students will have comfortable couches and tables for meeting and collaborating, white boards, monitors for presentations or video conferencing, and two enclosed rooms for groups. The beauty of the Toaster is that it can morph into many uses and will serve as a lively place for students to get together, Leebaw says. Student organizations will be encouraged to use the hub for meeting and hosting events, and they will even have lockers for storage.

In addition, the Libraries’ existing Breakerspace on the second floor of Walter will move to the Toaster. It will continue providing students free access to maker tools like 3D printers, sewing and cutting machines, embroidery software, virtual reality technology, and more. Bischoff, who runs the space, hopes that the move will encourage people to use its amenities for multidisciplinary collaboration.

“Students see the need and they are excited to have a place they can call their own,” Leebaw adds. “They feel like the library is theirs, and they identify the Toaster as a place where they will feel at home.”

Students have been deeply involved in making the Toaster pop. They generated the idea, helped shape its offerings, created its concept and branding, and contributed to its design. Sam Byun, a Carlson School undergrad who worked on the Toaster as a Holmes Center intern, appreciates that students were able to contribute so significantly to developing the space.

Byun is excited to have a place that connects entrepreneurial-minded students from across campus. “Students might not necessarily know others who are involved in entrepreneurship. Having a general space will connect people together,” she adds. “Coming to school as a freshman, I didn’t think there were that many people interested in entrepreneurship. Students will be able to connect with others and start companies with them, or work on projects, or learn new skills like coding.”

A team from CLAgency, a student-run brand communications agency in the College of Liberal Arts, took on creating a name and branding for the hub. CLAgency students developed the Toaster brand, fleshed out its brand voice and messaging, and crafted a plan to spread the word about its resources, says Maria Hayden, a CLA student and team member. The team even consulted on furniture, murals, the logo, and other features.

CLAgency students were asked to be original and playful when it came to naming the space, tie into local roots, and keep the student audience in mind. They ultimately selected a concept that describes a place where ideas develop and pop up — the Toaster. It didn’t hurt that the pop-up toaster was invented in Minnesota. The team was concerned that the name would be considered too silly, Hayden says, but the fun, playful moniker really made students smile.

“We went with the Toaster because we wanted it to be a warm, inviting environment, and the idea of a toaster is very warm. We thought it really summarized what the place is all about. It’s where ideas are generated, discoveries are made, and entrepreneurial spirits are ignited,” Hayden says. “It’s unlike any other place on campus.”

The Libraries tackled a big job when it agreed to repurpose some of its Walter Library basement into the Toaster Innovation Hub. Previously, the basement was used for browsable stacks of periodicals and some student study space.

A group of librarians spent five months evaluating how to handle 5,000 titles and 140,000 mostly science periodicals. They analyzed each item to determine what was duplicated elsewhere in the Libraries, what could be accessed electronically, and what was no longer being published, says Danya Leebaw, Director of Social Sciences and Professional Programs.

Next, they found homes for it all. About 30,000 volumes were moved to the Elmer L. Andersen Library caverns, 90,000 items were relocated to the Walter subbasement, and 20,000 were withdrawn due to duplication or available electronic versions.

Other materials got moved to off-site storage and will be accessible upon request.

“It’s such a testament to the staff that worked on this project. A whole group of people did a ton of work to make this happen, and sometimes it’s invisible,” says Mary Miller, Director of Collection Management and Preservation. She added that it was worth it because the Libraries is so enthusiastic about the new space. “We were excited about and supportive of the goals of a student-centered, cross-disciplinary space. The Toaster fills that need.”