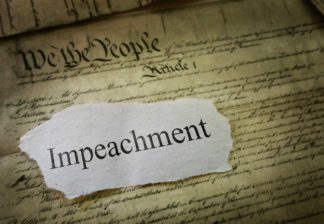 With the current impeachment proceedings underway for President Donald Trump, it’s important to understand how impeachment works and the earlier precedents for impeachment.

When the founding fathers wrote the Constitution of the United States they were fully aware of the possibility of corruption and abuse of power by elected and appointed officials alike, and thus introduced a series of checks and balances to address such a possibility. They formed three co-equal branches of government, the Executive, Legislative, and Judicial branches and introduced regular elections to ensure the peaceful transfer of power.

Having freed themselves from Great Britain — whose king was unelected and could be removed from power only by a revolution — they also introduced the power of impeachment as a means of removing a corrupt official from office. In particular, according to Article II section 4 of the Constitution of the United States: “The President, Vice-President and all civil Officers of the United States shall be removed from office on Impeachment for, and Conviction of, Treason, Bribery, or other high Crimes and Misdemeanors.”

A brief history of impeachment

Ironically, the process of impeachment was first used, “by the English Parliament in 1376, to wrest power from the King by charging his ministers with abuses of power, convicting them, removing them from office, and throwing them in prison” (Lepore 26). By the time of the American Revolution the practice had fallen into disuse in England.

The first American official to be impeached was the U.S. Senator from Tennessee, William Blount, in 1797 on charges of conspiring to assist England’s attempt to seize Spanish controlled territories in modern day Florida and Louisiana. Charges were dismissed but Blount was removed from office before a trial.

Many federal officials and presidents have been threatened with impeachment, but it is rarer for impeachment proceedings to progress through hearings and finally to a vote in the House. In U.S. history, 19 officials have been impeached. Of those, seven were convicted, seven were acquitted, three resigned before conviction, and one was removed from office before a trial.

Only two presidents have been impeached — Andrew Johnson in 1868, for violating the Tenure of Office Act when he removed Secretary of War Edwin Stanton from office, and Bill Clinton in 1998, for lying under oath to a Federal Grand Jury and obstruction of justice.

Neither president was convicted in the Senate, although Johnson avoided being convicted by only one vote. While Richard Nixon was never impeached, he retired from office under the threat of impeachment.

The Federalist Papers contain two sections, LXV and LXVI, written by Alexander Hamilton that discuss the issue of impeachment.

Larry Jacobs: McKnight Presidential Chair in Public Affairs, the Walter F. and Joan Mondale Chair for Political Studies, and director of the Center for the Study of Politics and Governance in the Hubert H. Humphrey School and the Department of Political Science at the University of Minnesota

See also: Center for the Study of Politics and Governance