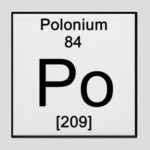 The Periodic Table of Elements turns 150 this year! In honor of the birth of the table that puts all other tables to shame, we will be taking a more in depth look at some of the elements.

We start with the inconspicuous and seemingly harmless element occupying the lower right side of the table, Polonium.

What’s in the name of an element? Sometimes more than you would think.

The people who discover a new element get to name it. Marie and Pierre Curie discovered a new element in 1898 as they were exploring the radioactivity of pitchblende.

Marie Curie was from Warsaw, Poland. At the time of their discovery, Poland was existing as parts of Russia, the Kingdom of Prussia, and Austria.

As a nod to Poland’s independence, which it would regain in 1918, Marie and Pierre named the new element Polonium. This marked the first time an element was named for political reasons.

Polonium sits in period 6 (with many other toxic and radioactive metals, but also with platinum and gold) and group 16 (with Oxygen, Sulfur, Selenium, and Tellurium) on the periodic table.

Polonium was produced in the United States at an Atomic Energy Commission site until 1971. It is believed that a Russian state-run plant in the closed Russian city of Sarov — the center of the Russian government’s nuclear research — was the world’s only commercial producer of the substance as of 2015. The US Nuclear Regulatory Commission estimates that only around 100 grams (3.5 ounces) of polonium-210 is produced worldwide each year.

There are relatively few uses of polonium. It is radioactive and unstable, with a very short half life. Of course, people have tried to use it in various ways.

It was used in early nuclear weapons, but its short half-life meant the polonium products didn’t have much shelf life. It was used as part of the detonator in the atomic bomb that was dropped on the Japanese city of Nagasaki during World War II.

Polonium has also been used as a static electricity eliminator in the production of paper and plastic sheeting, as well as in silicon chip production.

Firestone filed a patent on polonium spark plugs and sold them in the 1940s and ’50s.

The idea was that radioactive material would improve the electrical discharge between two electrodes. Polonium spark plugs were safer and less expensive than radium ones. Firestone advertised their product as providing “smoother motor performance” and “faster pick-up.”

But the short half-life meant that the enhanced performance wasn’t long lasting.

The long and short of it: polonium products don’t have much shelf life. So what is polonium good for? Apparently, poisoning people.

The death of the Curie’s daughter Irène Joliot-Curie is the first death blamed directly on polonium. A 1946 laboratory accident is believed to be directly related to her death from leukemia in 1956, according to “The Disappearing Spoon and Other True Tales of Madness, Love, and the History of the World from the Periodic Table of the Elements” by Sam Kean.

Polonium entered the news in 2006, when ex-KGB agent Alexander Litvinenko was poisoned by polonium while dining in London. The front-page story featured dramatic images of Litvinenko lying in his hospital bed. Two Russian men Litvinenko met with, Andrei Lugovoi and Dmitri Kovtun, were accused of the poisoning. Lugovoi and Kovtun’s ties to the Russian government increased suspicion since Russia is the only known producer of Polonium.

Some have speculated that polonium was also used to poison Yassar Arafat, President of the Palestinian National Authority and Chairman of the Palestine Liberation Organization, in 2004. His body was exhumed in 2012. In 2013 The Lancet reported high levels of polonium in Arafat’s bodily fluids, stating that they were from a “natural environmental origin.”

Want to learn more about the periodic table, Marie Curie, or Poland’s independence? Here are some places to start.

On the Periodic Table of Elements