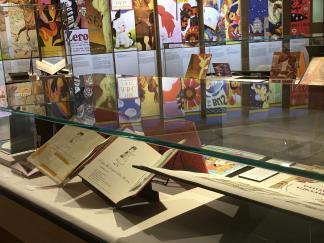 As many of you know, The ABC of It: Why Children’s Books Matter is an exhibit at the University of Minnesota Libraries, which runs through May 31. It’s an adaptation of the 2013-2014 exhibit at the New York Public Library, curated by children’s book historian Leonard S. Marcus.

The University of Minnesota exhibit uses Marcus’ text, but replaces the objects from The NYPL with materials held in the University’s Children’s Literature Research Collections (CLRC). The exhibit also includes a bibliography and suggested readings.

Community concerns and our response

Around the time the exhibit opened in February, we heard concerns that the works of some authors on display had racist overtones and that the exhibit did not adequately reflect these concerns, and we took steps to bring more context to these materials.

We plan to launch a digital exhibit based on the materials of The ABC of It this fall. It will include content and educational context on racist images and text in children’s books, with links to further reading and resources. This additional material will be added to the digital version of The ABC of It book.

We invite all who are interested in research at the Children’s Literature Research Collections to read, reflect, teach, and learn at the University Libraries’ Archives and Special Collections.