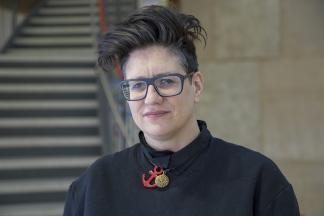 Rachel Mattson would like you to know that a trip to the archives can change your life for the better. You might even find yourself laughing with joy in the middle of an otherwise silent reading room. That’s exactly what happened a few years ago, when Mattson brought a friend to the U.S. National Archives to do some research for a puppet show the two were making together.

“My friend, who had never done archival research before, was reading a document and she recognized a person from the past as being kin to her as a queer person,” says Mattson, who joined the Libraries last summer as Curator of the Jean-Nickolaus Tretter Collection in GLBT Studies.

“She was so surprised and excited, she burst into laughter. On the one hand, I was like ‘Be quiet!’ We were, after all, in the solemn reading room of the National Archives. On the other hand, I was so delighted. We had found something we could use — it was clearly so meaningful and such a delightful discovery.”

For Mattson, that moment at the archives was an example of public history in action. Getting people to think about the past — to learn history inside and outside the classroom — has been part of Mattson’s life since before she became an archivist.

“We tend to think of the past as a closed story,” she says. “But there’s another side to it. Studying history opens up possibilities you never knew existed. There are stories that haven’t yet been told. And the meaning of the past is still up for debate and questioning.”

Studying history in college sparked Mattson’s imagination and helped her to see the world differently. The past was a more complicated, interesting, and troubled place than she had previously realized. It was an important insight, and one that she wanted to share with other people.

She continued her education with a strong focus on public history. After earning a Ph.D. in history from New York University, she got a job as an assistant professor. Mattson worked at the State University of New York where she ran a teacher education program in history and social studies. She worked to support creative and effective history education for young people.

But at the same time, she was making art and taking on side projects where she delved heavily into archival practice and research. Soon, Mattson came to a realization: The side projects weren’t going to be enough. And it was clear what she had to do next.

“I quit my tenure track job where I was definitely going to get tenure. I went back to school, and I got a master’s in library science.”

At the experimental theater archives

With M.L.I.S. degree in hand, Mattson soon found work as the digital archivist for La MaMa Experimental Theatre Club. The New York City theater had been active since the 1960s. Its archives held stories of people – often from marginalized groups – who were creating art that spoke truth to power.

“La MaMa has a long history of nurturing a kind of queer theater that borders on activist practice,” says Mattson. “ It has also been a place where people of color, immigrants, and indigenous people could experiment with radical forms of performance. For instance, the Native American Theater Ensemble made some incredible work at La MaMa in the 1970s.”

Mattson can easily list the names of La MaMa artists and performing groups whose stories deserve to be told and remembered. Her familiarity comes from years of work managing archival records.

“I’m an archives nerd,” she says. “There’s a deep joy in organizing stuff and making it available.”

Joining the U of M’s Tretter Collection

Her passion for public history and archival nerdishness made Mattson an ideal candidate for the Tretter Collection archivist position when it became available last year at the University Libraries. Since she started last summer, she has dived into the busy, daily work of running a collection — processing new materials, and making them available to campus and community.

The Tretter Collection is the largest archival collection of LGBTQ materials in the Upper Midwest. Its areas of strength include the personal papers of Twin Cities activists, artists, and legislators and the records of Twin Cities organizations. The collection, which is international in scope, is also strong in rare books, periodicals, pulp fiction, zines, and oral histories.

Mattson looks forward to shepherding the collection’s growth in the future. By listening to researchers and answering their questions, she learns more about the types of documents they’re seeking. Their requests can help inform her process. She is also focused on adding materials that broaden the collection.

“How do we tell stories of LGBTQ people whose voices haven’t been amplified enough?  That question is an organizing frame for a lot of the work I want to do here,” she says. “It is work that was already underway when I arrived. For instance, the Tretter’s Transgender Oral History Project is now entering phase two. This new phase will focus on documenting histories of justice-seeking, activist organizing tactics, and policy around trans rights. I feel very lucky that it’s part of the work I get to help steward around here.”

Class at the archives

Like many of the archivists who work at the Libraries, Mattson collaborates with U of M professors to bring classes into the archives. Last semester, she was able to host about a dozen class sessions. She also wants students and researchers to know that “at the archives, we want to help you. Let’s talk about how I can guide you through these research materials to the best of my ability.”

Though she can’t promise you’ll laugh out loud with joy, she does think you’ll benefit from working with archival documents. As Mattson notes, the past is wonderfully complicated and it’s full of stories you’ve probably never heard before.