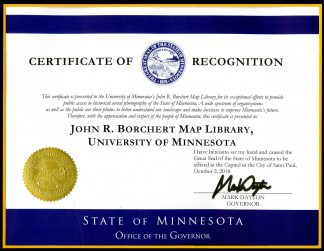 For Ryan Mattke, one of the most rewarding aspects of winning the Governor’s Commendation Award at the Minnesota GIS/LIS Consortium Conference, was meeting in person the many people who use MHAPO — the website that was key to winning the honor.

“It’s been really exciting to receive the award in such a public space, mostly because we’ve had users coming up and talking to me about the resource and about the site and how they use the historical aerial photographs,” Mattke said. “To actually see and meet the people who consume the digital services that we provide is really exhilarating.”

The Minnesota Historical Aerial Photographs Online website was developed over several years at the University Libraries and is an application that has drawn more than 250,000 users to the website over the last six years. MHAPO includes more than 100,000 digital copies of historical aerial photographs, mostly from between the 1920s and the 1990s, and they cover all 87 counties in Minnesota. The award, signed by Gov. Mark Dayton, was presented October 4 in Duluth.

“It’s recognition by the community and the governor about significant resources that are important to us as a community and as a state,” said Dan Ross, Geographic Information Officer for the State of Minnesota. “In this case, the Borchert Library and the online mapping system for historical photos that they created is a resource that many, many, many users can go to and look at things like change over time.”

Ross said that MHAPO and other geospatial data helps “improve our economy and save our environment” by providing tools for planners to choose the “best places to put everything from economic centers to a mall, or a family complex or a new state park.”

Support for MHAPO is statewide

Andra Mathews, a GIS Specialist with the Minnesota Center for Environmental Advocacy, called MHAPO a one-of-a-kind resource. As a member of the Minnesota Geospatial Advisory Council, Mathews reviewed the nominations for the Governor’s Award.

“The letters of support for the Borchert Map Library nomination came from across the state, not only from organizations, but also from individuals,” she said, noting MHAPO’s significant statewide impact. “It reaches almost every area in our state with coverage and also with use.”

In his nomination letter, William Craig, Associate Director Emeritus of the University of Minnesota’s Center for Urban and Regional Affairs, referred to the Borchert Map Library as a pioneer and a national model.

The Borchert Map Library “has gone above and beyond their narrow mandate of being a repository of maps and photos for people to stop by and browse,” he wrote. “It is collaborating with multiple government agencies to both preserve their photography and make it accessible to their staff. It is sharing those historic photographs with other agencies and the widest possible public by making them easy to discover and easy to access.”

“I’m so grateful that the Borchert Library has this program of essentially taking care of all this historical imagery,” said Mark Kotz, Chair of the Minnesota Geospatial Advisory Council, an organization with 24 members from all levels of government — including cities, counties, regional councils, tribal councils, the State of Minnesota, and federal agencies. “MHAPO has just a wealth of information that everyone in the geospatial community can use.”