Karl: A book recently came to Preservation which caught our attention. It is the January 1875 volume of The Official Army Register, a periodical statistical report on the state of the U.S. Army. The title page bears a stamp that reads “Library, Headquarters of the Army.” 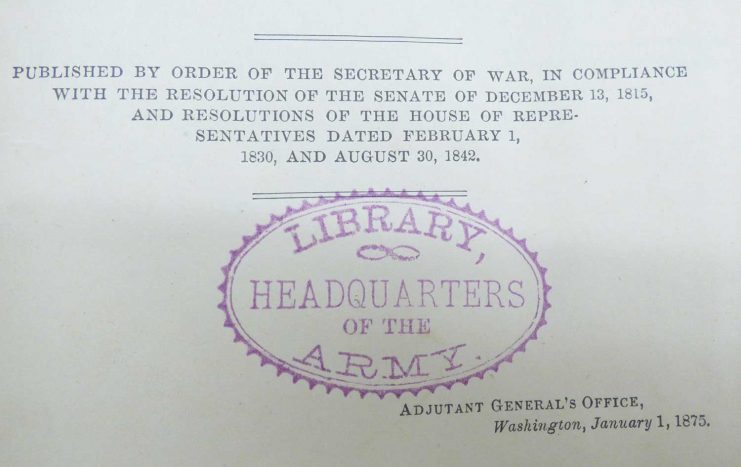 In this it does not stand out from other volumes in the set, but it does establish that its first home was, most likely, in the library of the U.S. Army in Washington, D. C. What sets it apart, however, is a handwritten label affixed to the front of the volume, which reads, “Lieut. Gen’l P.H. Sheridan.” That label is guaranteed to catch the eye of any student of the Civil War. 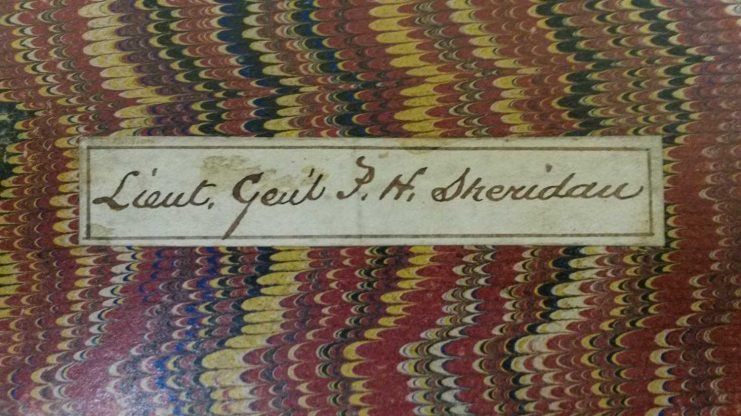 Philip Henry Sheridan was one of the most famous generals on the Union side of the Civil War. He served in the Western Theater for the first several years of the war, then came east with Ulysses S. Grant to serve with him during the final campaign of 1864-65. Among the many battles he was involved in, Sheridan may be best remembered for his exploits on Missionary Ridge during the battle of Chattanooga in 1863 and his Shenandoah Valley campaign of 1864.

Sheridan also played a significant role after the Civil War in the Army’s campaign against the Plains Indians, eventually forcing the Native Americans onto reservations. Under his command, he orchestrated surprise winter attacks on Indian villages, with no regard for casualties to women and children. This included George Armstrong Custer’s 1868 attack on Black Kettle’s encampment along the Washita River, which many historians now regard as a massacre.

After the war, U.S. Grant was appointed as Commanding General of the U.S. Army, the highest position in the Army at the time, equivalent to today’s Chief of Staff of the Army. Grant gave up this position when he was elected President and was succeeded by William Tecumseh Sherman. When Sherman stepped down in 1883, he was succeeded by Sheridan.

Sheridan held the post from 1883 to 1888. During this time, his rank was Lieutenant General, which matches the rank on the label. An 1875 volume of The Official Army Register would be something that would very naturally be in Sheridan’s possession when he was serving as head of the Army in Washington. Whether this volume was his personal possession that he subsequently donated to the Army’s Library, or the timing was in reverse order, is impossible to know, but time and place all fit very nicely.

Laurie: What caught my eye when Karl showed me this book is another form of history. The publication is a huge list of information about soldiers in the Army for 1875, organized by regiment. Among other information, it includes every soldier’s name, rank, and birth state, as well as the dates of their entry into service and any commissions they received.

However, someone must have felt that the published information was incomplete or was updating the information to keep it current. The printed data on almost every page is supplemented by annotations, all handwritten in black ink in the same clear, flowing hand.

Among the annotations were scores of added names, each meticulously placed on the appropriate page. 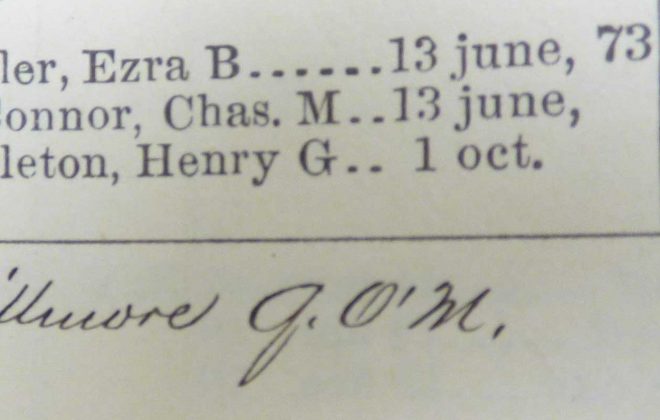 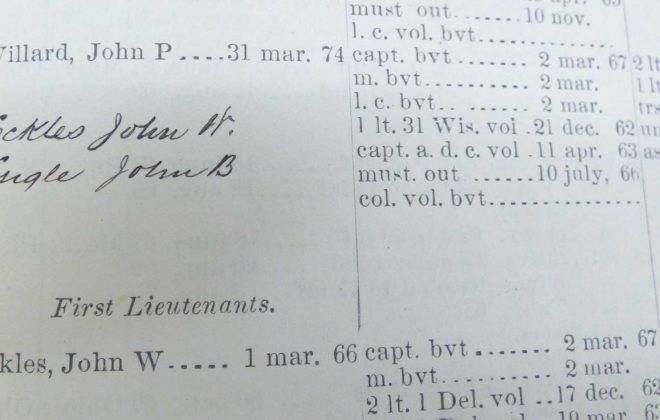 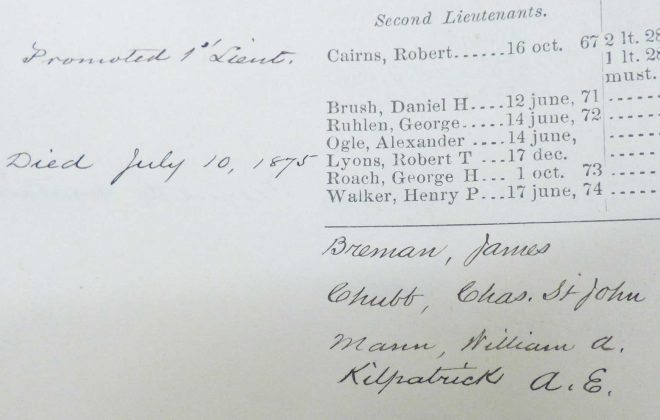 Notes were also added for soldiers who resigned, retired, died, were dismissed, promoted, appointed to a new position, or were transferred. 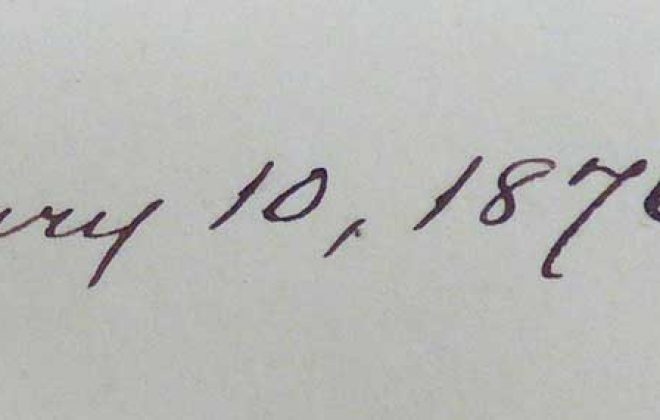 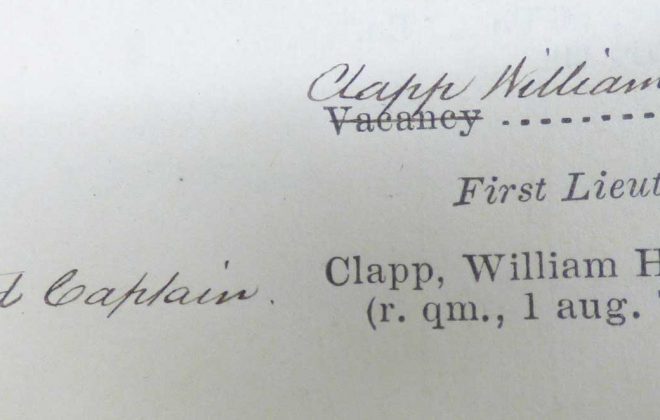 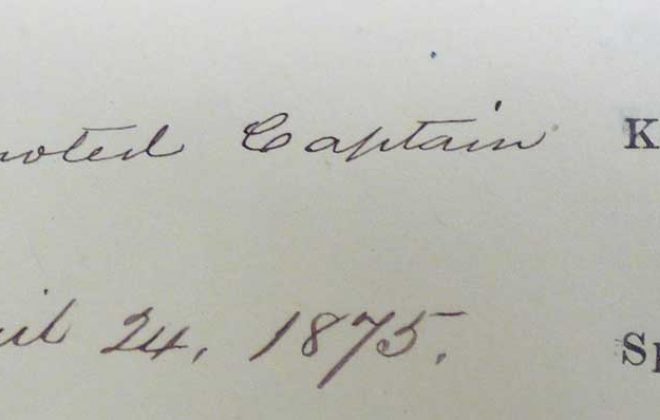 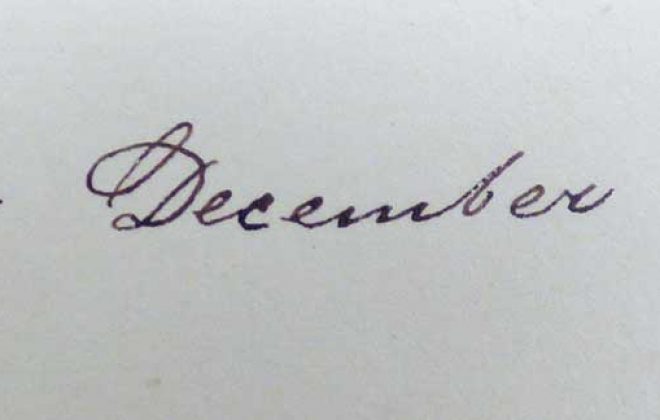 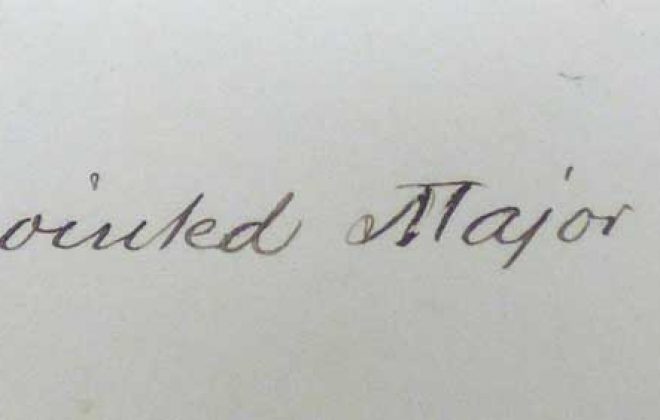 A few miscreants were even noted as “Cashiered.” We had to look that one up — it means being dismissed from the armed forces in disgrace.

The outline of the mystery is becoming clearer. Did Lieutenant General P. H. Sheridan himself once own this volume? The name on the front cover, property stamp, and the time he was in office all make that probable. Was he the person who added the notes? The dates of the annotations make that possible.  It could have been a clerk working for Sheridan at the time or it could have been a later owner, but the possibility that it was Sheridan himself, is within the realm of plausibility.

There is another source of information that could help shed light on this mystery. Sheridan published his personal memoirs in 1888, and the Library of Congress has digitized the original draft — handwritten, of course. If you’re as curious about who made the annotations as Karl and I are, you can evaluate the evidence, compare the handwriting, and reach your own conclusions.