Anthony Comstock is well-known as the instigator of the Comstock Law, which was passed by the United States in 1873 in an effort to stop the shipment and sale of “obscene materials” through the U.S. mail.

Less well known is the role played by the Young Men’s Christian Association of the City of New York, now the YMCA of Greater New York, in making Comstock’s vision a reality.

Comstock took it upon himself to rid the world of the moral depravity represented by the sexually explicit objects, graphics and writings that he found on the streets and in the shops of New York City. The New York City YMCA at first lent its considerable weight to the effort. However, as time passed, the association may have believed that the link to Comstock was tangential or even harmful to its changing mission.

Whatever the reason, the YMCA committee that supported his work was spun off into an independent organization, the New York Society for the Suppression of Vice. The YMCA drafted the bill to incorporate the society that was subsequently approved by the state legislature in Albany on April 22, 1868.

Comstock, born in 1844 in New Canaan, Connecticut, was a child of the Second Great Awakening. His mother was especially pious, and young Anthony grew up with a steady diet of Bible stories. According to some sources, he especially liked stories about brave men who fought corruption, whether in the temple or in Sodom. Comstock saw himself as David fighting Goliath and was well-prepared for his life as a moral crusader.

After his service in the Civil War, when he was mocked by fellow-soldiers for his religiosity and  prudery, he settled in New York City in 1866. Comstock was stunned by what he saw:  prostitution, drug addiction, and bookstores that sold lewd and indecent materials — books, post cards, pamphlets, and what he called “obscene objects.”

He immediately joined and became active in the YMCA, serving on the Committee for the Visitation of the Sick. Inspired by a lecture he heard at the YMCA about the dangers of amusements, Comstock became determined to rid New York of corrupting material and soon began his private campaign to cleanse the city. His commitment to this work, he said, was strengthened by the death of a friend whose illness and decline was related to exposure to the corrupting materials that surrounded him.

During his early years fighting what he saw as a moral war, Comstock developed the trick of buying an item and then returning with the police to arrest the seller. He also had items sent to himself via U.S. mail. He would then show the items to the police and join them as they moved to arrest the seller for violation of the 1865 law against sending such items through the Post Office.

The link between Comstock and the YMCA in the effort to improve the moral environment in New York City apparently began when he wrote to the association seeking funds so he could buy printing plates used to create books and pictures with the goal of destroying them.  Comstock’s letter fell into the hands of YMCA founder and lay leader Morris Jesup, who gave him $600 after interviewing Comstock at his position in a dry goods emporium.

The YMCA and Anthony Comstock then embarked upon a mutually beneficial relationship that lasted for several  years. 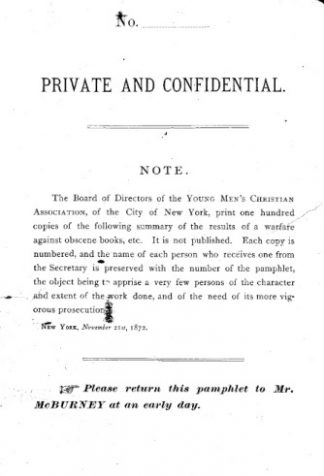 At that time the YMCA was already walking a similar path, conducting a survey of vice in the city. In its 1865-1866 annual report, it reprinted a sermon by Rev. Stephen H. Tyng, Jr. that outlined in great detail the temptations that a young man faced upon arriving in the city.

Tyng also wrote about what he saw as correctives to the situation: well-lit rooms in a conspicuous location with game rooms, libraries, gymnasiums, bowling alleys, and other opportunities for healthy recreation.

This belief in the healing powers of physical and mental activity became the impetus and justification for the building campaign that followed, with the first purpose-built YMCA structure in the United States opening in 1869.

The YMCA in New York City had helped obtain the passage of a New York State law known as the Obscene Literature Bill, which was introduced in February and approved by the state assembly on April 22, 1868, updating an earlier 1861 law. Other states, including Massachusetts, Vermont, Pennsylvania, and Connecticut had also approved similar legislation in the years before 1868. 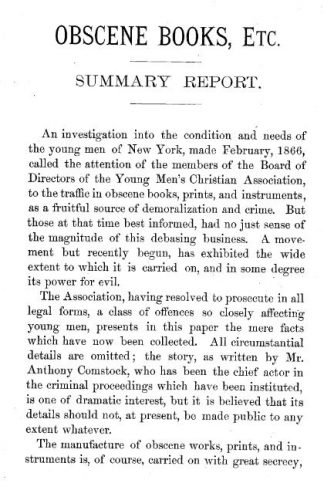 Comstock argued that existing state laws and the 1865 federal post office law was not enough. He believed that it was too easy to escape prosecution because of the laws’ loose definitions of obscenity. Although Congress had had the opportunity to revise the law when it reauthorized the Post Office in 1862, the only change made was to add licentious postcards to the list of offending materials prohibited from the U.S. mails. Otherwise, the 1865 law remained intact.

Comstock and the YMCA in New York City gathered evidence that the existing state and federal anti-obscenity laws were inadequate to the task. The YMCA, with Comstock in the lead, had collected ammunition to support Comstock’s efforts to get a stronger law through Congress. In 1872, the association issued a report, “Obscene Books, etc., Summary Report.” The report detailed the legislative history of efforts to pass similar laws. It listed and described the printed matter, pictures, and objects that Comstock had destroyed during his crusade as proof that current prohibitions did not work. It also listed the names and addresses of the offending sellers. It also included language that prohibited the sale, advertisement or distribution of any information or items related to contraception.

After the law was introduced in the House of Representatives, its official sponsor, Clinton L. Merriam of New York State, turned the moral effort into a political one, speaking to the House of the “low brutality” that threatened the future of the Republic. In addition to passing the law on the last day of the session in March of 1873, Congress awarded Comstock an unpaid appointment as a postal inspector.

Also in 1873, YMCA secretary Robert McBurney was already urging the YMCA to sever its relationship with Comstock, noting that individual action would be more effective. The unstated reason, according to some, was that Comstock’s grandstanding ways were attracting unwanted publicity to the New York YMCA. Whatever the reason, the New York YMCA helped establish a separate organization, drafting a charter for the legislature in Albany.

After the Committee (now Society) separated from the YMCA in January 1874, Anthony Comstock did not entirely sever his relationship with the association. In fact, leaders of the Association served on the Board of the new organization. Comstock also continued to be a speaker at YMCA events and meetings.

For example, in 1892 he gave a lecture to the Students Branch titled, “Dead Weights.” He also continued to donate his publications and the annual reports of the New York Society for the Suppression of Vice to the YMCA library. Moreover, the Society continued to hold meetings at the YMCA. In 1878, for example, the Society’s annual meeting was held in the YMCA “Lecture Rooms.” The report of the annual meeting also noted that the next public meeting was to be held in the YMCA’s Association Hall.

New York YMCA leaders were not alone in the belief that something must be done about the availability of pornography and other undesirable materials. YMCA leaders throughout the country spoke at length on the subject of pernicious literature and what could be done about it at the 1873 Annual Convention of Young Men’s Christian Associations of the United States and British Provinces.

Comstock spoke briefly, offering the members assembled a practical approach to ridding a community of offensive writings — especially those that appeared in newspapers. Comstock suggested that the YMCAs in each community push for the passage of local ordinances prohibiting the sale of such papers and then enforce the law.  According to Comstock, when newspaper vendors realized that their competitors were affected just as they were, they would stop selling such material.

Comstock continued in his role as secretary of the New York Society for the Suppression of Vice until his death in 1915. The organization continued, with at least one name change, until 1950, when it dissolved. The law that bears his name continues on the books, although gradually weakened and largely unenforced.