By Susan Gangl and Karen Carmody-McIntosh 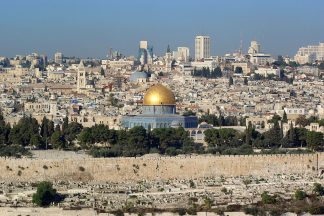 President Donald Trump recently announced that the United States will officially recognize Jerusalem as the capital of Israel. The president also plans to relocate the U.S. embassy from Tel Aviv to Jerusalem.

In his December 6 speech, President Trump declared, “I’ve judged this course of action to be in the best interests of the United States of America and the pursuit of peace between Israel and the Palestinians.”

While Israel’s government was pleased by the announcement, Palestinian president Mahmoud Abbas spoke out against it. This course of action would be a break from prior U.S. policy and a defiance of the general global political consensus on best steps to take in negotiations involving the Israel-Palestine conflict.

We’ve gathered some resources to help you learn more about this new development and about the long-standing conflict between Israel and Palestine.

Reactions to the speech

Selected Resources from the University Libraries

For availability search by title in the U of M online catalog:

Resources from other institutions

Note: For databases listed at other university sites, you may need to search titles in our own U of M catalog (or Databases A-Z) to gain access via your U of M account.