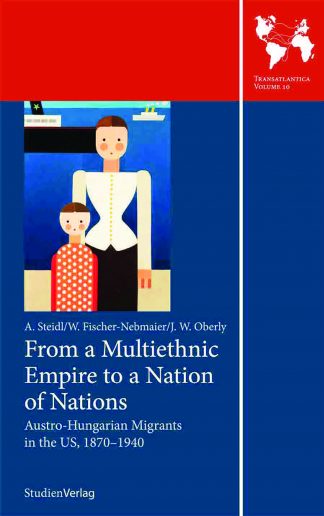 In 2010 and 2011, a team of researchers from the University of Vienna and University of Wisconsin worked as guest researchers at the Minneapolis campus of the University of Minnesota to conduct research that has earlier this year resulted in a publication of the book “From a Multiethnic Empire to a Nation of Nations: Austro-Hungarian Migrants in the U.S., 1870-1940.”

Written by Annemarie Steidl, University of Vienna, Wladimir Fischer-Nebmaier (Austrian Academy of Sciences)  and James W. Oberly (University of Wisconsin – Eau Claire), the book is a significant new contribution to the study of migration from Austria-Hungary in the late 19th and early 20th centuries. Among other resources, the researchers used the collections of the IHRC Archives and datasets of the Minnesota Population Center.

The book publication was a result of a two-year research project “Understanding the Migration Experience: The Austrian-American Connection.” The project was supported by the Dietrich W. Botstiber Foundation, based in Pennsylvania. The grant was administered by the Center for Austrian Studies at the University of Minnesota.

Wladimir Fischer-Nebmaier, a specialist on South Slav migrant groups and fluent in Serbian, Croatian, and Bosnian, was mostly impressed by the amount and width of migrant media from Austria-Hungary in their own languages as reflected by the IHRCA collections. According to Annemarie Steidl, Professor at the Department for Economic and Social History at the University of Vienna, conducting the project at the University of Minnesota was a really lucky choice as the IHRC Archives and the Minnesota Population Center alike provided a dynamic working environment, and were extremely generous hosts for the project group. With the IHRC Archives and the Population Center in adjoining buildings, the University of Minnesota is a very special location for a research approach which combines qualitative and quantitative methods. Without the researchers and staff of both institutions who always tried to fulfill even the most unusual requests, it would not have been possible to analyze such a large number of different documents of various migrant communities from Austria-Hungary.