Our previous blog post talked about the history and the process of creating marbled paper to use as endsheets or covers for books. Today, we’re going to explore some of the myriad patterns that can be created using the marbling process.

All of the examples below are from books in the University of Minnesota Libraries’ general collections!

The simplest marbled pattern is made by dripping one or two colors onto the bath, then using a stylus to swirl them. This is generally known as fancy or fantasy marble.

The pattern below is called stones or agate. Not only is it beautiful on its own, it’s also the base pattern for many of the combed patterns that marbled paper is best known for. This pattern is made by simply dripping or spattering pigment onto the surface of the bath. Each color pushes the previous colors out in an irregular manner. It’s an easy concept, but it’s actually harder to make an attractive pattern than you might think!

Agate patterns can be modified by adding swirls — these are called French Curl or Snail. The swirls can be made individually, with a stylus, or by using a comb with very widely spaced teeth.

Getting marbling pigments to spread predictably is more of an art than a science, so getting a particular result is harder than it seems! Since each pigment is made from different materials, each will spread differently. The extent to which a pigment is diluted can also affect the degree to which it spreads, and adding other substances to a color will also change its behavior.

For example, a dispersant can be added to a pigment to help it spread; counterintuitively, adding water will make it spread less.

If the final pigment or dispersant added in an agate pattern spreads aggressively, the first colors added will be pushed into narrow veins, creating lovely veined patterns that really look like marble (hence the name).

The French shell pattern was developed around 1800. It’s made by adding a few drops of olive or linseed oil to the pigment. This creates the combination of thin veins with color gradations in the spots.

Combing an agate pattern results in the striking patterns that come to mind when most people think of marbling. One of the most common combed patterns, Nonpareil, is made by combing a base pattern of stones, shifting the comb slightly to the side and combing a second time, then combing a third time at right angles to the first two.

The example below shows the pattern we see most often in books from our general collection; the colors are also very typical. Notice the small circular spot in the upper left corner? It was caused by a foreign object in the bath, most likely an air bubble.

French Curls can be added to a combed pattern:

This pattern, created in the late 18th century, is called Bouquet. It’s made by starting with a nonpareil base, then combing with a double rake.

Did you notice the underlying rippled pattern on some of the examples? An interesting variation that can be added to almost any pattern is known as “Spanish style.” This is achieved by creating a pattern on the surface of the size as usual, then shaking / moving the paper back and forth when lifting it.

There is a story (undoubtedly apocryphal) is that this technique was invented by a marbler with a bad hangover whose hands shook as he lifted the paper out!

These are only some of the marbling patterns we see in books from our general collections. There are as many more as a marbler’s imagination and skills can invent. Below are a few exuberant examples. 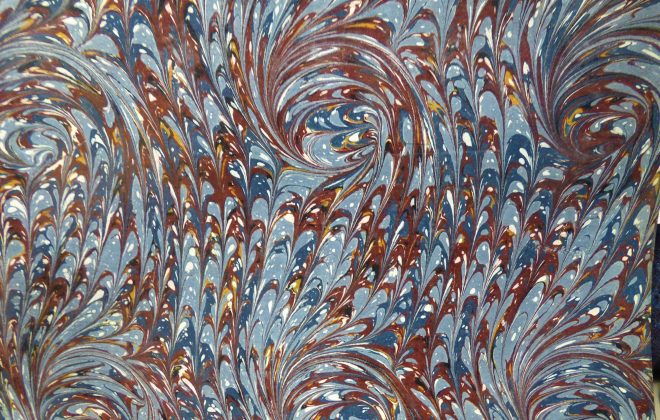 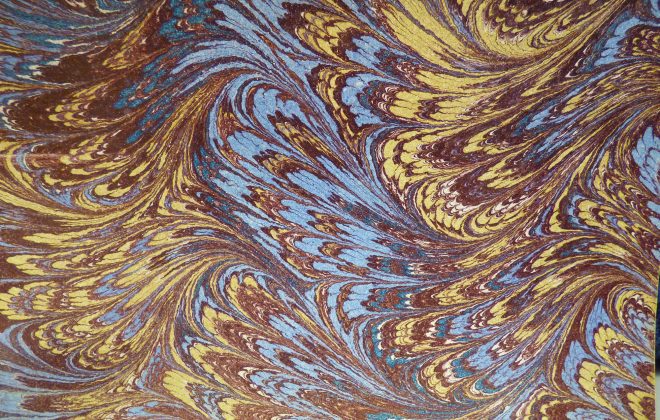 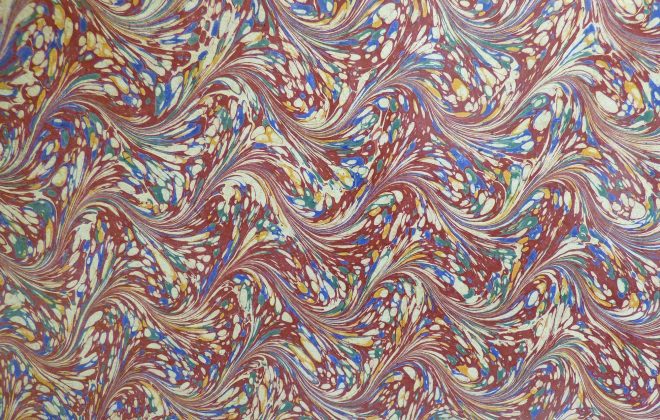 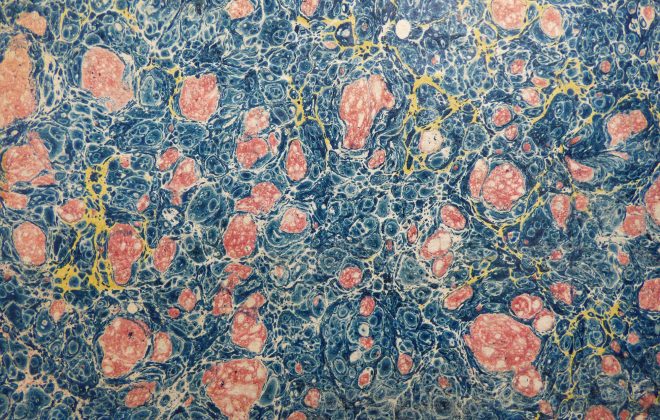 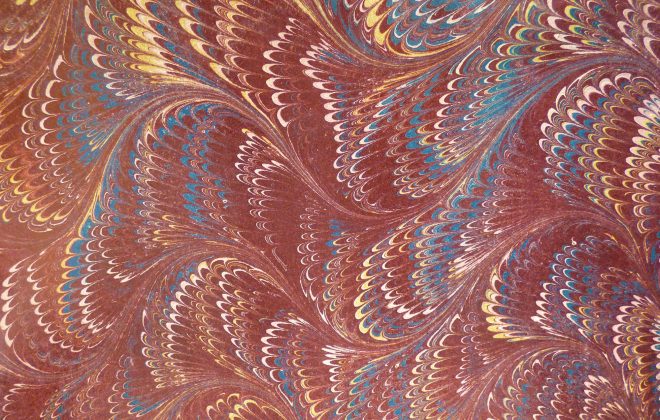