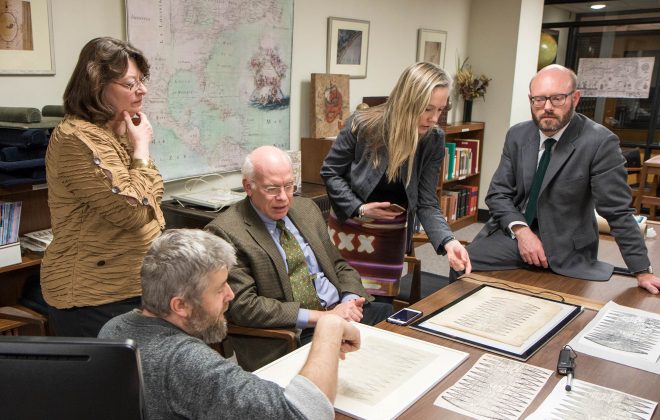 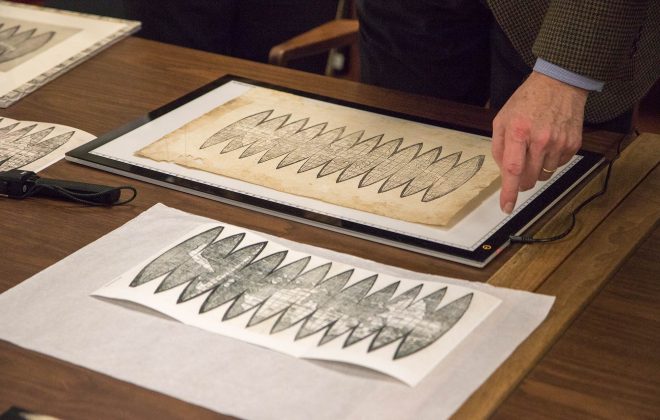 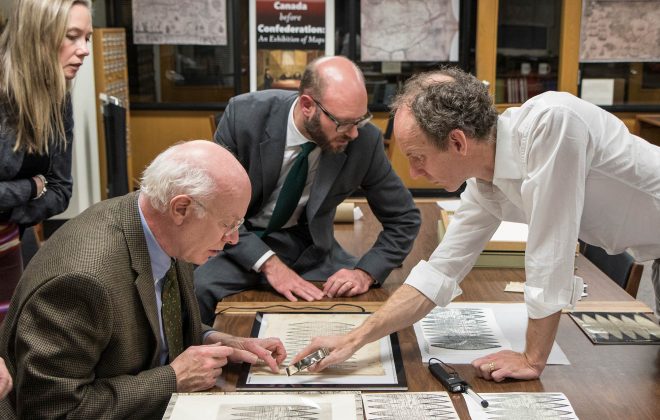 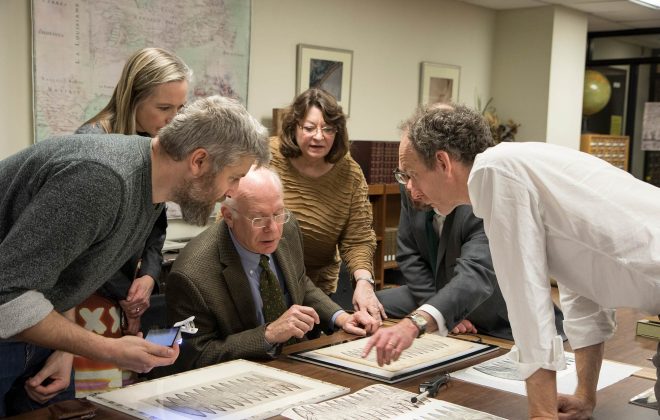 Maggie Ragnow center with representatives from Christie’s
A December 10 New York Times article has called into question the authenticity of a previously unknown fifth original of the rarest of documents — a 510-year-old map that first used the word “America.”

The University of Minnesota’s James Ford Bell Library is holder of one of the other four copies by famed German cartographer Martin Waldseemüller.

Christie’s, the auction house, which now has the fifth, had estimated it would sell from $800,000 to $1.2 million. But Christie’s has pulled the item from auction pending a review of its authenticity. Recently, Christie’s representatives visited the Bell Library to compare its find to the Bell’s copy, which is considered the real deal.

Meanwhile, in the Times’ “Why Experts Don’t Believe This Is a Rare First Map of America,” the writer, Michael Blanding — author of The Map Thief — cited several experts who doubted that Christie’s map is the real thing. Nick Wilding, a rare-book expert at Georgia State University, told the Times that a white line on the Christie’s map matched a spot on the Bell Library’s Waldseemüller map — apparently where extra paper had been added to repair a tear.

According to the Times: “An original map, one that came directly off the woodblock, would not have replicated that tear, which happened later, Mr. Wilding said. But this map did and so, he said, he believes the map Christie’s has represents a reproduction of the Bell map.”

“The repair line noted by Nick Wilding in this newly discovered map is unmistakable and, unfortunately, it is only one of several indicators of a photo reproduction of the Bell Library map,” said Marguerite Ragnow, Curator of the James Ford Bell Library, who noted that the provenance of the Bell’s print has been well established going back to the 1800s.

Ragnow adds: “This is the second time that Christie’s has brought a newly-discovered copy of the Waldseemuller globe gores to Minneapolis to compare with ours. The first time, in 2005, Tom Lamb of Christie’s and I were able to establish that the 2005 Christie’s copy was absolutely authentic and quite possibly from the same print run as our copy.”

The Bell Library’s Waldseemüller map is available for viewing by the public. Appointments are encouraged.

Read the full story from the New York Times