I first became aware of Margaret Ann (Dolly) Hubbard when I was preparing my First Friday lecture on Minnesota authors. There are 14 boxes of materials held in the Kerlan Collection. This collection includes scrapbooks, photo albums, correspondence, manuscripts, and research. I found out that Dolly supported herself and her mother as a writer during the depression. That Dolly traveled across the United States by car even though her Mother wouldn’t let her drive above 35 mph. When Dolly’s mother died, she sent a Christmas card to an old friend in Duluth, they fell in love, and she married him at age 46.

Dolly was born in North Dakota in 1909, her family moved Duluth, MN where she finished High School at age 15, the Duluth Normal School (Minnesota State Teacher’s College) at 17.  She supported herself and her widowed mother while attending college by with student work. Dolly and her mother moved to the Twin Cites so that she could complete a B.S. in English at the University of Minnesota. It was 1932 and Dolly couldn’t get a teaching job, so they returned to Duluth. 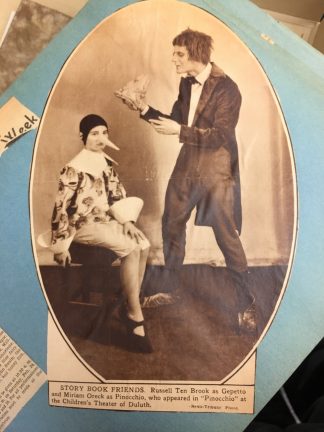 These children’s story adaptations were performed in community theaters across the United States.

Dolly Hubbard’s first novel, a children’s book was about set in Pembina, North Dakota. To research Little Whirlwind(1940)  she spent time among the Ojibwe on the Leech Lake Reservation. 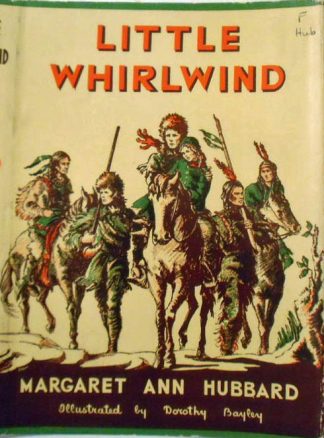 “Margaret Hubbard’s 1940 Little Whirlwind, which chronicles a group of families living at the Pembina fur-trading colony in northwestern Minnesota in the early 1800s. What’s unusual about Little Whirlwind is that Hubbard realistically recreated the ethnic diversity of this community, prominently featured a mixed-race Ojibwe-French family, and overtly discussed racism.”

This was Dolly Hubbard’s life as a writer. She and her mother lived in rental apartments in and around the Twin Cities. They would move to warmer locations in the winter and it was there that she would set her next novel. Dolly wrote sixteen novels and fictionalized biographies for children. 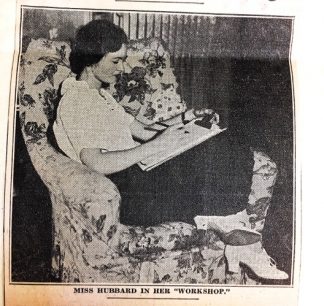 During WW II, Dolly returned to Duluth, Minnesota and trained as radio operator for Northwest Airlines at the Williamson-Johnson Municipal Airport. She was featured in an article titled Pistol Packin’ Mama. 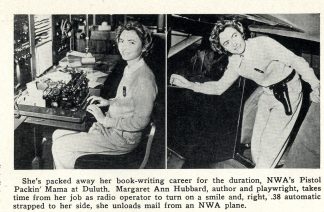 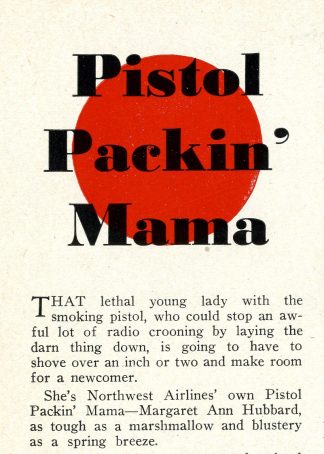 Hubbard also wrote four mysteries for adults, beginning with Murder Takes the Veil (1950), which she wrote after spending some time living in New Orleans. In 1957 she adapted Murder Takes the Veil as a play for the Dramatic Publishing Company. This play continues to generate residuals for her heirs.

Hubbard’s work was well received and reviewed in national media including The New York Times and the Chicago Tribune.

Hubbard received numerous awards for her writing, including a regional author fellowship from the University of Minnesota in 1944. She was also honored with a membership in the Gallery of Living Catholic Authors. Dolly’s husband, Joseph died on August 5, 1981. Margaret Ann Hubbard eventually moved into Duluth’s Benedictine Health Center and died there at the age of 83 on November 1, 1992.

Margaret Ann Hubbard (Dolly) will be remembered not only as a successful writer but one of culturally sensitive historic fiction for children, a writer of mysteries set in the world of Catholic clergy, and as an author of accessible fictional biographies.

Hubbard, Margaret Ann, and Virginia Broderick. Flight of the Swan : A Novel Based on the Life of Hans Christian Andersen. Milwaukee: Bruce Publishing Company, 1946.