A View from Halfway

Nine months ago, staff in the Upper Midwest Literary Archives set out to increase access to four key literary collections, including the papers of poets Bill Holm, Robert Bly, Margaret Hasse, and publisher Milkweed Editions. We hoped to explore the interconnected and often intimate relationships among writers and publishers, and to better understand the factors that nurture creative and intellectual production in Minnesota.

We also hoped to challenge the notion of Minnesota as simple flyover country, and to embrace the idea that good art grows everywhere.

Our work so far has allowed us to explore these ideas in exciting ways. We have been able to forge stronger partnerships with organizations like Milkweed Editions. We have also worked with new researchers interested in exploring the role of independent publishers in anchoring a literary community.

In September we were able to visit with members of the Minneota community, who shared with us their first-hand memories of Bill Holm. We have even been able to initiate new conversations with those whose work adds to a larger and more nuanced picture of what literary life is like in the Upper Midwest.

And while this work has affirmed our belief that the literary community in Minnesota stretches far beyond the confines of the metro area, we have discovered a sometimes complicated relationship between writers of the prairie and the communities in which they work. Sometimes this means confronting the perception that living the small town life means unequivocal failure. For other Minnesota writers, it is the struggle to understand their role in the literary community, locally or nationally defined. Sometimes the struggle is simply against the environment itself!

Sense of place is common theme

Sense of place is a common theme among the work of many writers who call our state home — and their archives tell the story of a home bustling with literary life. It can be seen in the stacks of poems solicited by Roseann Lloyd and Deborah Keenan for their 1990 publication Looking for Home: Women Writing About Exile.

In Margaret Hasse’s archives, it can be seen in her collection of broadsides, including printings from Smith Park Poetry Series. It can also be seen in the archives of John Rezmerski, which include hundreds of newsletters from various literary-minded organizations. Each collection provides its own unique glimpses into the heart of our literary community.

Working with these collections, and ruminating on what they say about life in the Midwest, has reinforced for us how important it is to capture these stories across our state. And though the writers themselves have told many of these stories in their published works, their archives offer a fuller, richer story than what goes to print.

The letters we found from Carol Bly to Bill Holm are just one of example of the many untold stories hidden still waiting to be unearthed. 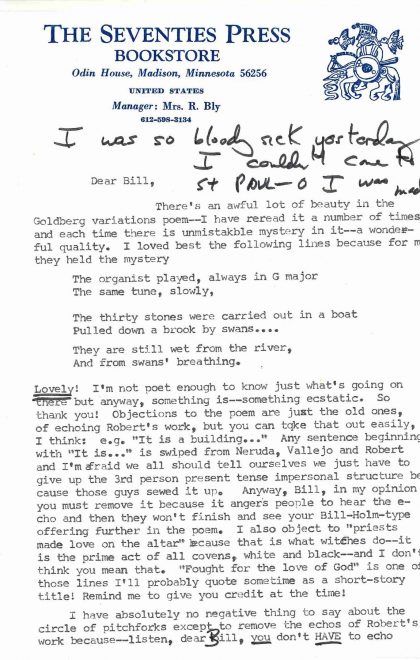 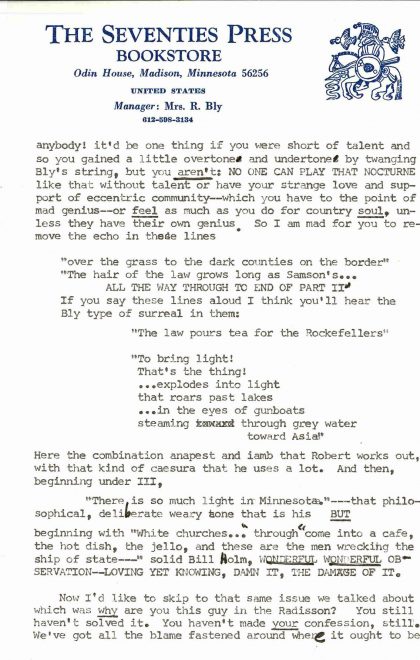 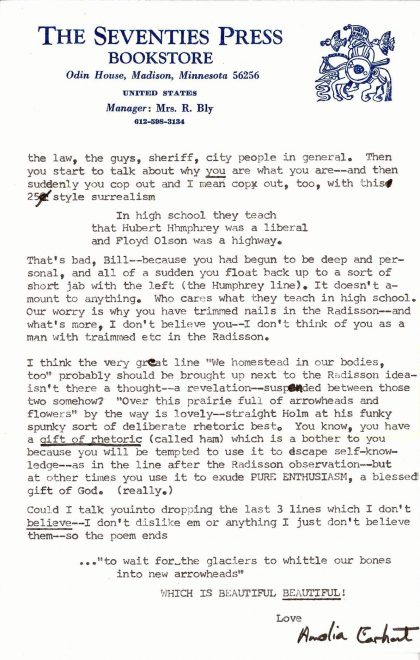 Carol Bly Letter Page 3
A letter from Carol Bly to Bill Holm, circa 1965. In the letter, Bly critiques one of Holm’s poems, insisting that the poem sounds too much like the work of Robert Bly. She tells Holm that he should embrace his own unique poetic voice. From the Bill Holm papers.

Bringing these stories to light

Our work over the next few months will focus on bringing those stories to light, revealing the true vibrancy of our literary ecosystem, and providing a more holistic understanding of our shared cultural heritage.

We are, in so many ways, just getting started.

We plan to keep these conversations going — with writers, with our colleagues, and with all who are inspired by this work. Stay tuned!

Funding for Prairie Poets and Press