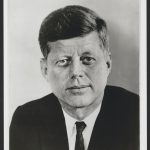 By Alicia Kubas and Karen Carmody-McIntosh

Recent news coverage has focused on a trove of newly available documents related to the 1963 assassination of United States President John F. Kennedy. In October 2017, the U.S. National Archives released about 2,800 previously classified documents to researchers and the public. Anyone can now access these records online.

The tragic event took place more than 50 years ago; November 22 is the 54th anniversary.

About 88 percent of materials – millions of documents – related to the JFK assassination have been publicly available since the late 1990s. However, thousands of documents remained fully or partially withheld due to security concerns from U.S. intelligence agencies.

About 300 documents remain classified and are currently under review.

Despite evidence that Lee Harvey Oswald acted on his own to kill the president, the JFK assassination has spawned a variety of conspiracy theories. Some recent news coverage and polling sheds light on the way Americans think about these events.

The following librarians can provide you assistance in seeking additional source material on this subject: