You are listening to U of M on your Historic Dial!

From 1938-1979, the Minnesota School of the Air brought educational programs into the classrooms of Minnesota and beyond over radio airwaves and through tape transcription. During the 1977-1978 season, School of the Air produced a series of radio “field trips” called Look What We Found, a program that introduced students to people and places in Minnesota. Join us this season as we revisit these radio field trips. Today’s episode takes listeners to the U.S. Weather Service branch at the Minneapolis St. Paul International Airport with hosts Walter Brody, Patty Goodwin, and Bill Golfus of KUOM radio.

Season 2: Episode 1: Look What We Found! The U.S. Weather Bureau

You are listening to U of M on your Historic Dial podcast.  Welcome to Season 2: Episode 1: Look What We Found!

Hello, this is Rebecca, Collections Archivist at University Archives. This season on the podcast we are going on a radio field trip.  Let me explain…

Forty years ago, in the fall of 1977, the producers, engineers, and announcers at University radio station KUOM were well into the start of the 1977-1978 season of the Minnesota School of the Air.  From 1938-1979, the School of the Air brought educational programs into the classrooms of Minnesota and beyond over radio airwaves and through tape transcription. 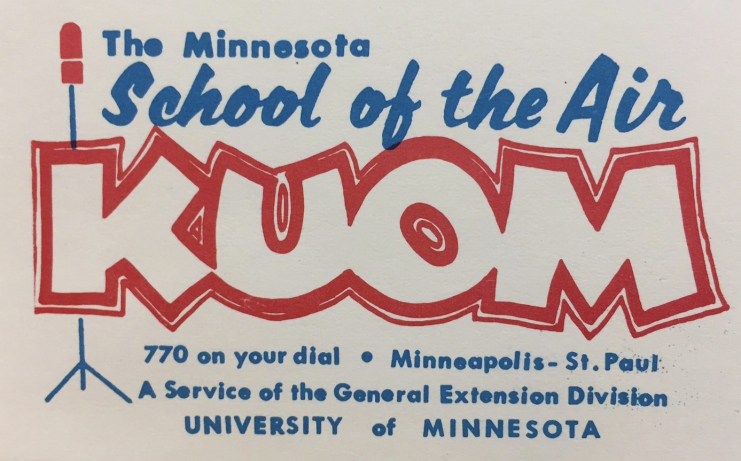 This year we’re going on a field trip in sound and time to the 1977-1978 season of the Minnesota School of the Air to look at what we found after these recordings were digitized and we were finally able to listen.

Beginning on Friday, September 22, 1977, from 10:50 to 11:00 a.m. KUOM broadcasted the series Look What We Found, a program that introduced students to people and places in Minnesota.

A printed guide with program descriptions and suggestions for before and after broadcast discussions were provided to interested schoolteachers. In a letter printed at the beginning of the guide, Walter Brody, Assistant Director and Producer, described Look What We Found as a “radio field trip,” that took “listeners out of the classroom and to places they may have never been.”

Brody outlined 3 effects the program could have on students:

So where did KUOM take students over the air that season? They toured local radio and television stations KUOM and WCCO, rode the Lake Harriet trolley, toured the grounds of Metropolitan Stadium, and visited the Como Zoo, to name a few.

Join University Archives during the 2017-2018 school year as we take occasional field trips in sound and time to the 1977-1978 season to listen to recordings of the original broadcasts of Look What We Found.

Join hosts Walter Brody, Patty Goodwin, and Bill Golfus on a field trip in sound to the U.S. Weather Service branch at the Minneapolis St. Paul International Airport. Patty asks, “Did you guys ever wonder where all the radio and T.V. announcers get their weather information?”  She interviews forecaster Ron Willis to get the answer.

[Group exclamation] Look What We Found!

Announcer: Come on you’ve been sitting there far too long. Join the Minnesota School of the Air as we take a field trip in sound to some place you’ve probably never been, somewhere in and around the Twin Cities. And here to go with you are your hosts Walter, Patty, and Bill.

Patty: Did you guys ever wonder where all the radio and T.V. announcers get their weather information?

Bill: Yeah where does it come from?

Patty: Well it comes from our local branch of the U.S. weather service. That’s located out at the Minneapolis-St. Paul International Airport and I decided to stop in there and see exactly what they’re doing.

Walter: Who did you go out there with?

Patty: I went with Daisy Fang. When we got there forecaster Ron Willis showed us around.

Patty: The sound that you hear right now is the rattle of teletype machines, the machines that send weather observations to and from weather bureaus all over the country.

Ron Willis: This is our teletype communications room and uh, the observations we take and also all the other offices take go out from this office and then we receive all the observations back from the other weather stations on teletypes. And the one we’re looking at right in front of us here now is the 2:00 weather observations from the 5-state area around Minnesota. I see Bismarck, and Duluth, and Fargo, and North Dakota and International Falls, Minnesota, and Alexandria here, Hibbing, Minnesota, so those are coming in right now.

Ron Willis: You’re looking at the observing console now. And the charts that we see in front of us, they look kind of complicated but, what they are is continuous records charts of wind speed, wind direction and amount of precipitation that’s fallen and the one up on the top left there is the barograph it’s the continuous recording of the pressure. And the big dial there is what we call the altimeter setting or what the radio stations call the barometer.

Ron Willis: The ‘h’ and ‘l’s’ mean the areas of high pressure and low pressure. And the wavy lines normally surround the ‘h’s’ and ‘l’s’, and these are lines of equal pressure. So that if we see an ‘l’ many times it sits right in the middle of other circles around it, and these circles are pressure lines so that this ‘l’ for instance up here in Canada that we are looking at right now is right in the middle of an area of low pressure and each line is a higher pressure as we go on out away from that ‘l’ or low pressure center.  And as a general rule, just very general rule, areas of low pressure are where bad weather or rain and cloudiness is found and areas of high pressure as a general rule are areas where fair weather is found. This isn’t always the case but mostly this is the way it is.

Ron Willis: The big round dial right in front of us is the main radar scope from the center point to the outer edge of the dial is 250 miles with the center at the Twin Cities. And uh, there’s always a little white area, echo area, that shows up right around the center point which is there all the time. Well it’s not weather, but you can see now as the antenna comes around – this is the antenna rotating around – you can see as it goes across these areas it leaves some white showing up on the scope and there are some showers right in here close and some more to the North.  So, this tells me that if it’s not raining out there now it will be very soon. We can stop that antenna at any time we want to and take a closer look at any certain area if we have a severe storm or if we’re looking for a possibility of a tornado.

Daisy: We’re at the top of the federal aviation building right now and we’re um, about to look at the weather thing. [laughs] I can’t remember what it’s called.

Daisy: Okay the rain gage then, but, and um [laughs]

Ron Willis: And it’s raining…. [laughs] We couldn’t pick a better time to look at the rain gage.

Ron Willis: Well this is one of the rain gages, this is the one that makes the lines on the charts that we were looking at downstairs. And what it… we call it a weigh gage, or a no, I’m sorry we call it a tipping bucket.  And what it does if you can see inside there there’s a little ah, a little cup like this thing here that catches the rain when it… the rain falls in the top into what looks like a funnel and the bottom of the funnel comes out right in a little cup there or a little, little container and when that fills up it tips over and empties the rain out of that part of it. And then the other side which also has a little cup in it comes up and that fills up and each, each, time that that tips over it means that 1/100th of an inch has fallen in that time and also each time it tips over there’s some wires in here that make that chart downstairs that piece of equipment draw one of those little lines on the chart.

This is called the weigh gage and this actually weighs the water that’s fallen. The chart is a little different in this one, this one has the chart right in the right in the gage itself whereas the one we just looked at has the chart downstairs.

If we take the top off of this we’ll see a pail, and ah, just a regular pail that catches the rain as it falls and it actually weighs the rain like a scale and each time, well each little line on this graph, on this chart is 2/100ths of an inch and um, I’m sorry it’s 1/100th of an inch. So that when we’ve had 100th of an inch of rain fall, the little pen, which traces a purple line on the chart, the little pen will move up to the next red line and tell us that a 100th inch of rain has fallen during that time period.

Forecaster: In the twin cities temperatures 65 degrees fa with westerly winds at 9 miles an hour…. [fades]

Bill: Why don’t you tell them how we get the weather here at the station Patty.

Patty: Well, here at our radio station we can get it in two ways, either over our teletype machines or from the weather bureau’s special frequency radio service.  We need a special kind of radio to pick that up.

Walter: Well I hope the weather is fine wherever our listeners are, because our times about up.

The U of M Radio on Your Historic Dial podcast is produced by University Archives for your enjoyment. Subscribe or download on iTunes or GooglePlay so you don’t miss another moment of historic Minnesota radio.

Recordings of the program series Look What We Found were digitized in 2016 in part with funds provided by the State of Minnesota from the Arts and Cultural Heritage Fund through the Minnesota Historical Society.

—Rebecca Toov is the collections archivist for the University of Minnesota Archives.

From the University of Minnesota Libraries