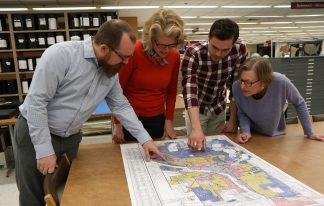 As many as 10,000 or more Minneapolis homeowners have property deeds with so-called “racial covenants,” wrote the Star Tribune’s Randy Furst in an August 27 story about the “Mapping Prejudice” project that lives in the Borchert Map Library at the University of Minnesota.

So far, the team has found about 5,000 deeds with racist restrictions. And they appear to be concentrated in the whitest Minneapolis neighborhoods, Furst writes, “illustrating the long historical reach that racial restrictions have had on the city’s residential housing, while helping to explain the de facto segregation housing patterns that exist today.”

“This is the most tenacious form of segregation,” U of M graduate student Kevin Ehrman-Solberg told Furst. “This language is much harder to eradicate than an ordinance because you can repeal an ordinance, but you can’t remove a racial covenant. The current resurgence of white supremacy reinforces the importance of this work.”

Read the full story from the Star Tribune