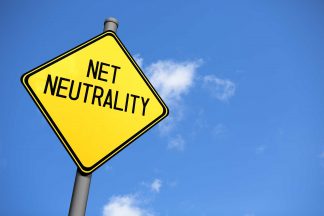 Wednesday, July 12 saw a huge online protest from hundreds of technology companies against the Federal Communications Commission’s (FCC) plan to change regulations around internet service. The FCC is currently accepting comments on topic, through July 17.

The protesters are in favor of net neutrality and don’t want to see protections from two years ago taken away. These protections maintain equality in speed of processing data regardless of website or service.

The FCC describes its changes as “Restoring Internet Freedom” and state that the regulations, “put at risk online investment and innovation, threatening the very open Internet it purported to preserve.”

This post will help you navigate the flow of information, provide you with links to publicly available information, and point you to University of Minnesota Libraries resources to guide your understanding of internet regulation.

As with most issues, the most direct way to get a handle on the two viewpoints is to seek out primary resources. Many government documents are made publicly available and can be found with internet searches.

Popular news outlets, including the New York Times, Wall Street Journal, and NPR, are covering the topic. These sources include both reporting and commentary that cover different aspects and provide different viewpoints on the topic.

Scholars and researchers have also been thinking about the topic. The Libraries owns a number of resources that might help inform readers from an academic perspective.

University of Minnesota research and expertise

The University of Minnesota’s Experts@Minnesota website shows Christopher R Terry, professor in Journalism and Mass Communication, as a local researcher working on issues surrounding net neutrality and FCC policy. His Experts@Minnesota profile lists his publications on the topic.

At the Libraries, Government Documents Librarian, Alicia Kubas, can advise on navigating all the recent information that government agencies have published on the debate since the regulatory changes took effect in 2015. Other subject liaisons with expertise that can inform researching different aspects of this topic include Alex Cabada, Computer Science Librarian, and Mary Schoenborn, Public Policy Librarian.

The topic of internet reform can be confusing because both sides describe their solution in positive terms, so critically engaging with the implications of each policy is key. Coverage is likely to be politicized and have a bias.

It is important to think about the Association of College and Research Libraries’ Framework for Information Literacy that reminds researchers that “Authority Is Constructed and Contextual” when engaging with articles and posts to ensure that sources are reputable and reliable and to decipher potential agendas or preferences.