The Libraries showered you with events in April, which featured Pulitzer Prize-winning science writer Elizabeth Kolbert (April 13), poet and spoken-word artist Bao Phi (April 18), a reception for our exhibit, “Protest Publishing and Art” and the Rutherford Aris Memorial Lecture (both April 20), the Science Quiz Bowl at Walter Library, and the Kerlan Award Lecture (April 29). Photos by Paula Keller and Karen Carmody-McIntosh. 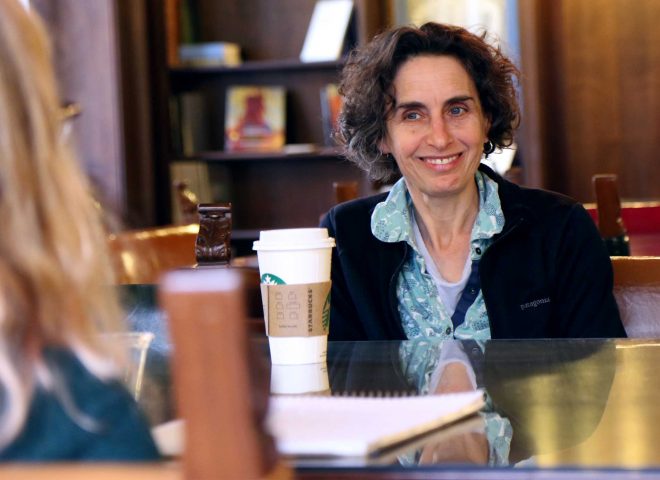 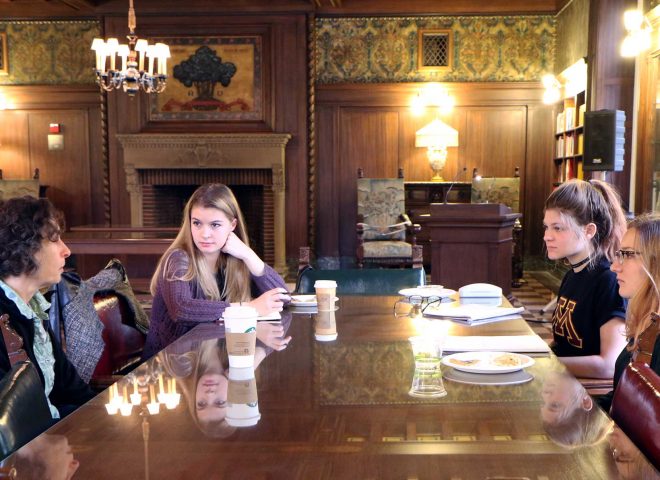 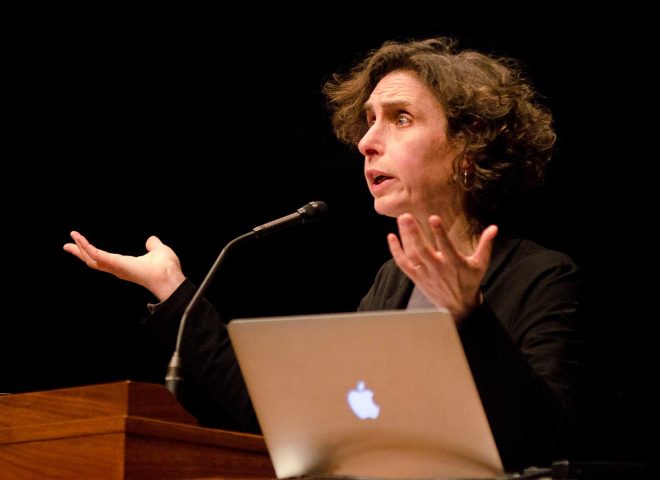 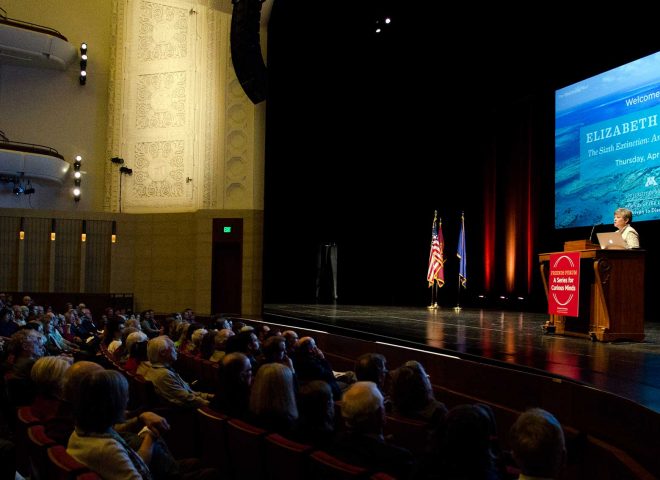 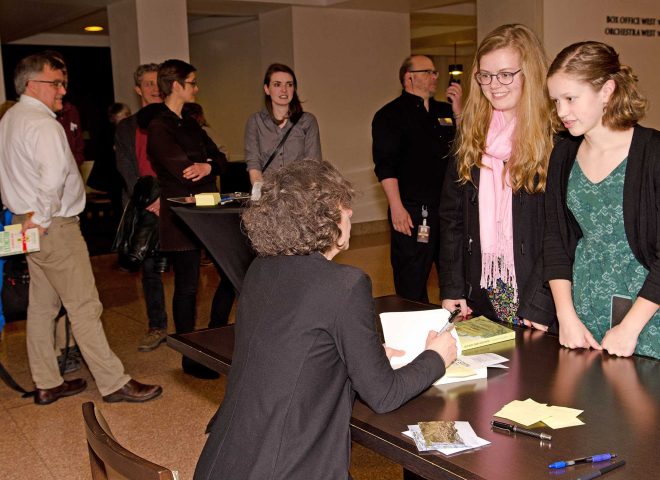 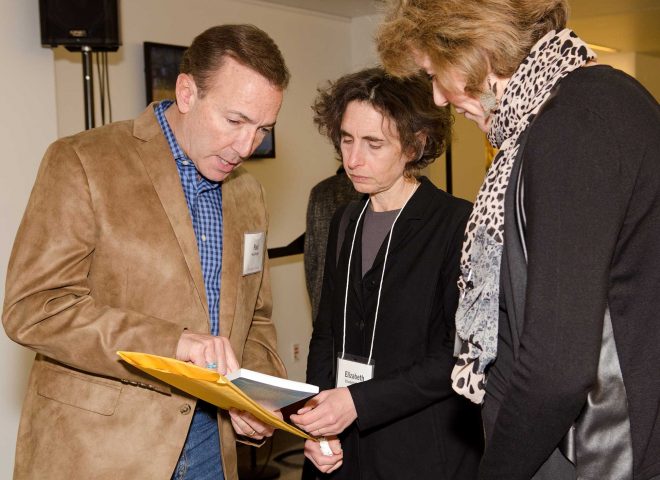 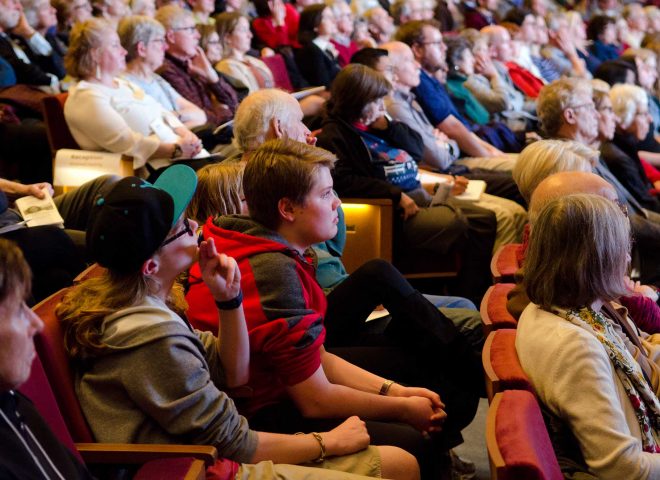 Elizabeth Kolbert met with Journalism students in the University Honors Program for conversations and questions before her April 13 lecture in front of more than 2,000 people at Northrop. Kolbert shared with students her thoughts about her career path and experiences, the importance of journalism, and topics of relevance today such as the popular podcast S-Town and the challenge of reporting the news in a climate of “alternative facts.”

Although the economic landscape remains uncertain for many traditional news outlets, Kolbert remarked on a growing appetite for political news that may bode well for young journalists. “I think journalism is a great career,” she said. “It’s a great way to constantly learn new things, to go places, and talk to people.”

“As a fellow female journalist, she’s someone I really look up to,” said Liv Martin, double major in Journalism and Applied Music. “And she’s had a lot of success in the field just by being curious about a lot of different things. She gave me hope. That, like, this is something you can make a career out of.

“It was important for me to talk to someone who’s actually in the field I’m trying to get into and learn about her experiences and see how that could maybe apply to my future,” said Taylor Vraney, double major in Journalism and Political Science, minor in Spanish. “She has so many interesting points. Just hearing her speak just reaffirms that this is definitely what I want to do.”

“She doesn’t simply write just for the sake of writing. She writes to educate and that’s my ultimate goal,” added Nikki Pederson, double major in Journalism/Professional Journalism and Information Technology. “I wanted to meet with her and see how I could influence the world with my writing.” 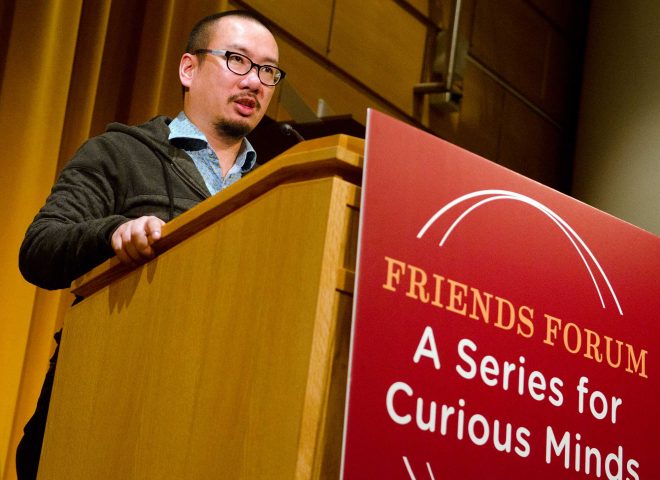 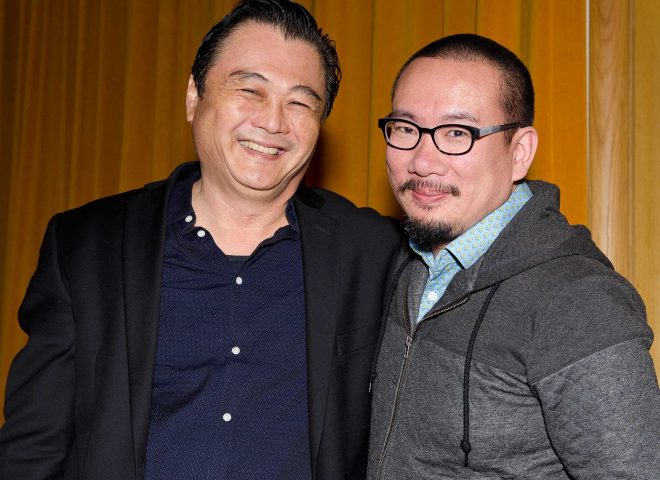 Bao Phi read from Thousand Star Hotel at the annual Pankake Poetry Reading on April 18 in Cowles Auditorium. The Saigon-born, Minnesota-raised Bao Phi is a spoken word artist, writer, and visionary activist who seeks to build community through the arts. 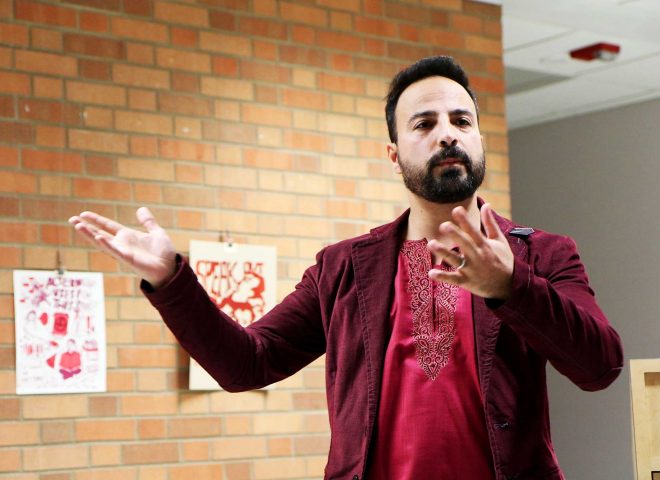 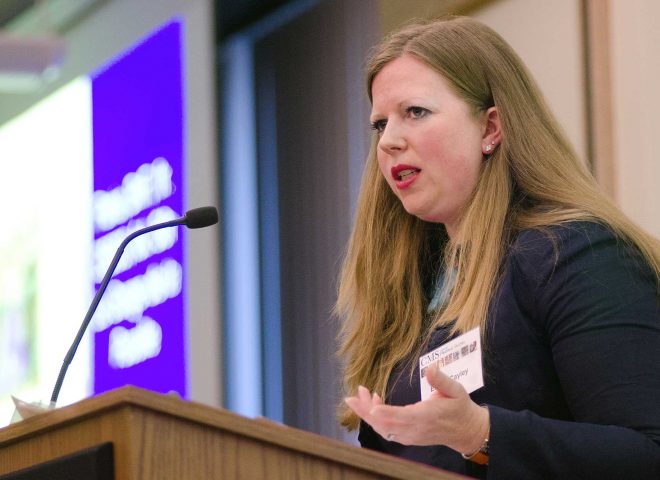 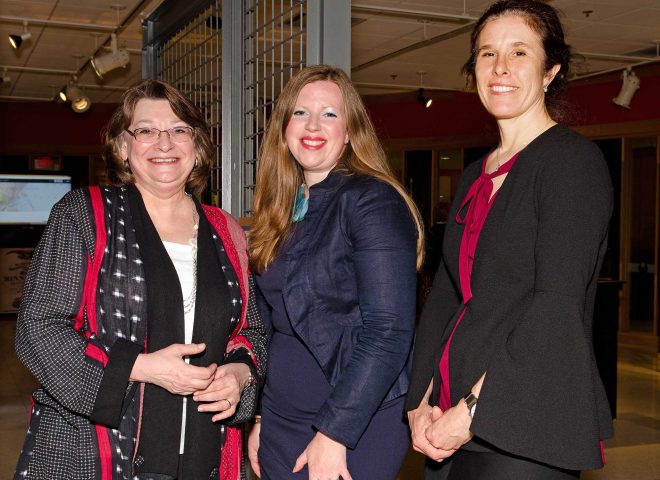 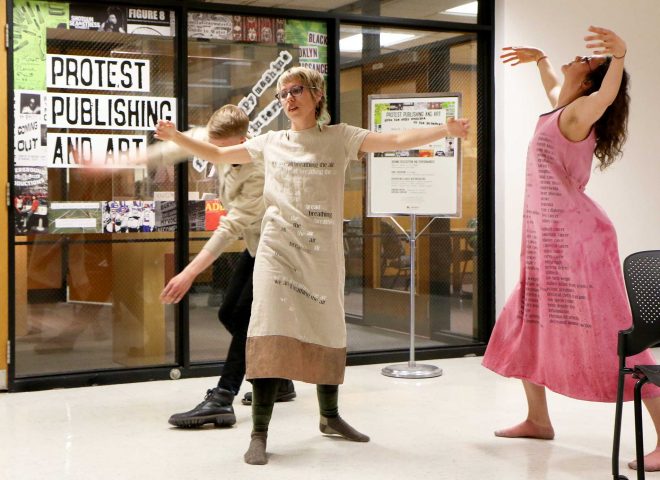 A panel of artists, faculty, and students discussed the Libraries’ exhibit Protest Publishing and Art on April 20 in Wilson Library, while Emma Cayley (DPhil Oxon), Associate Professor of Medieval French at the University of Exeter, UK, delivered the Rutherford Aris Lecture in Elmer L. Andersen Library. 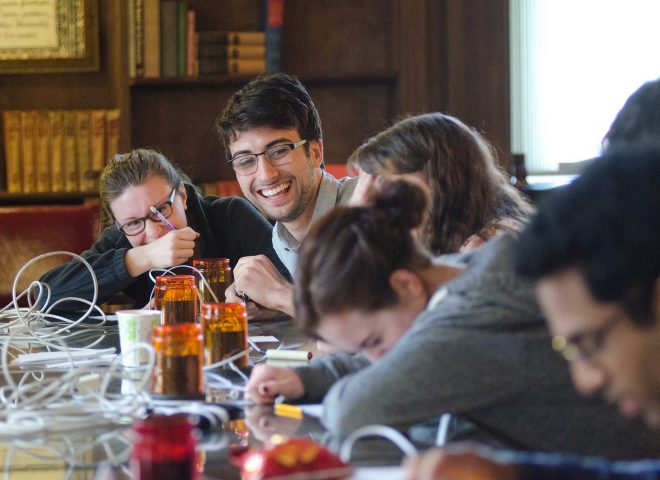 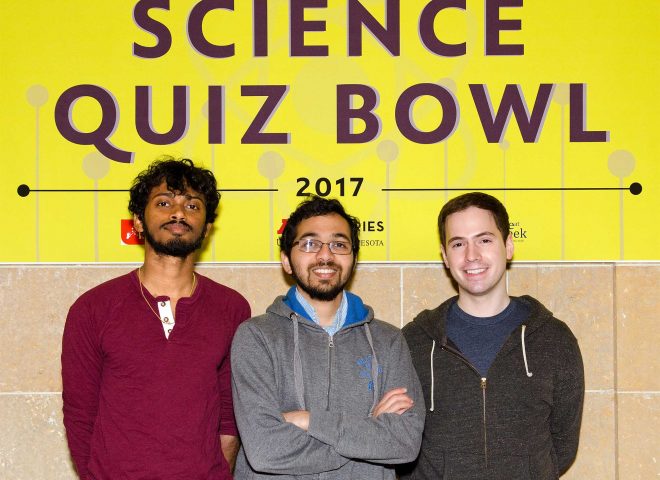 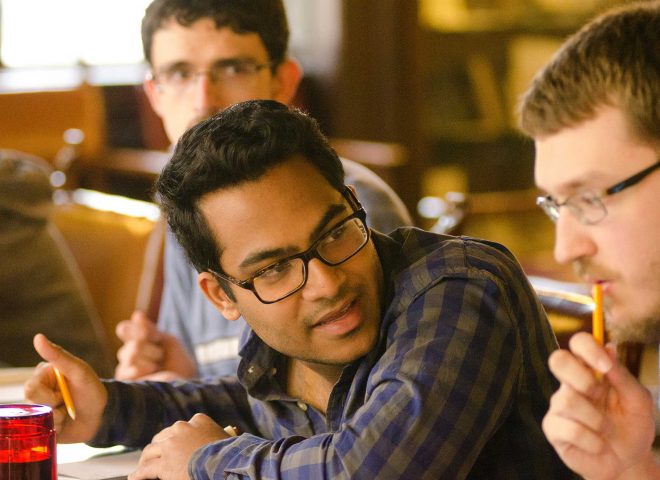 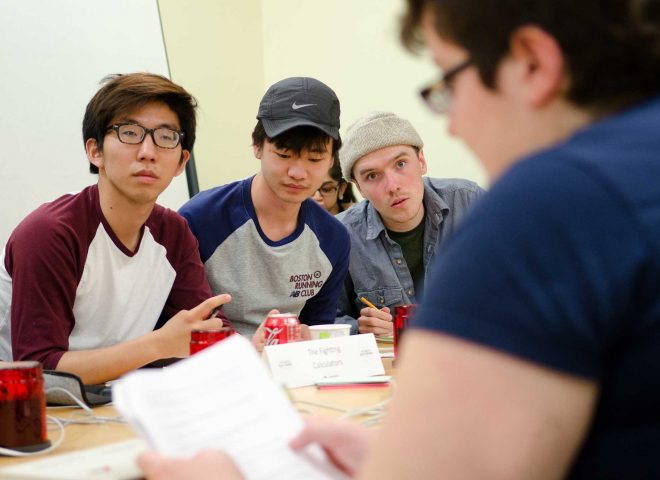 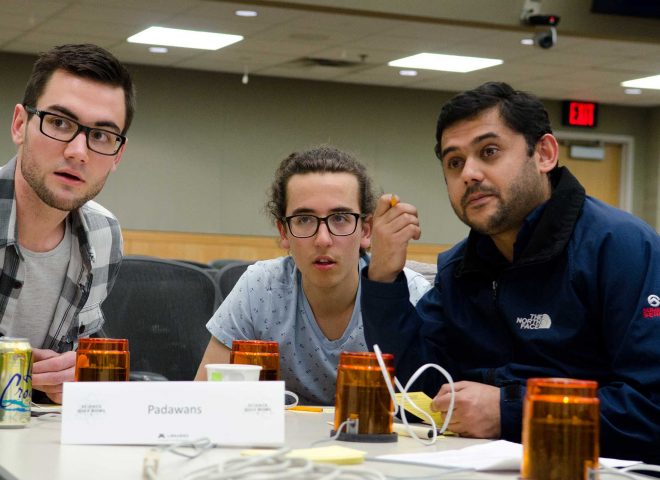 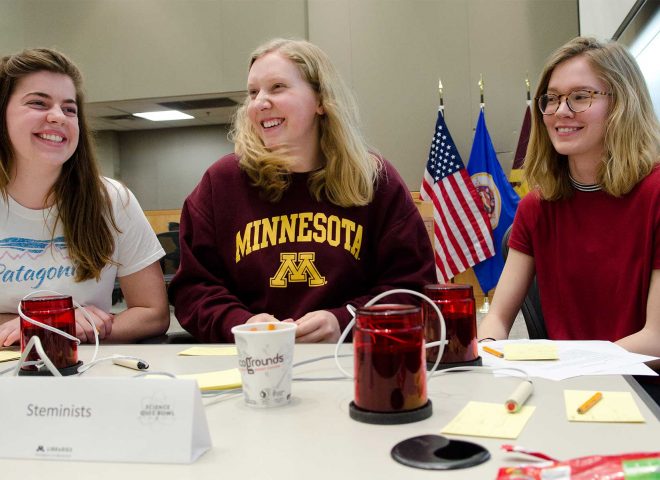 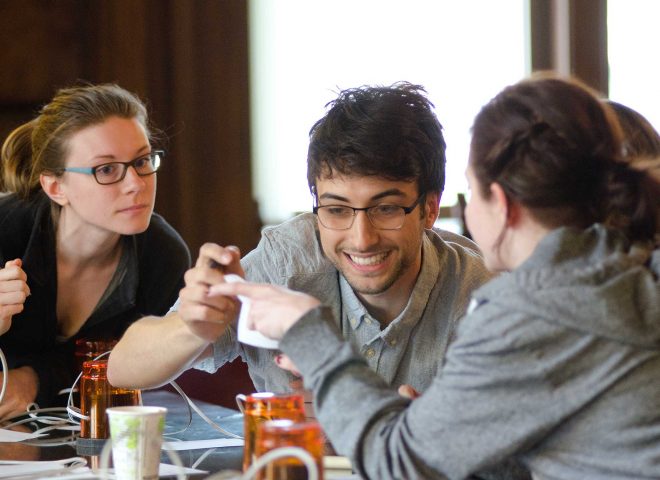 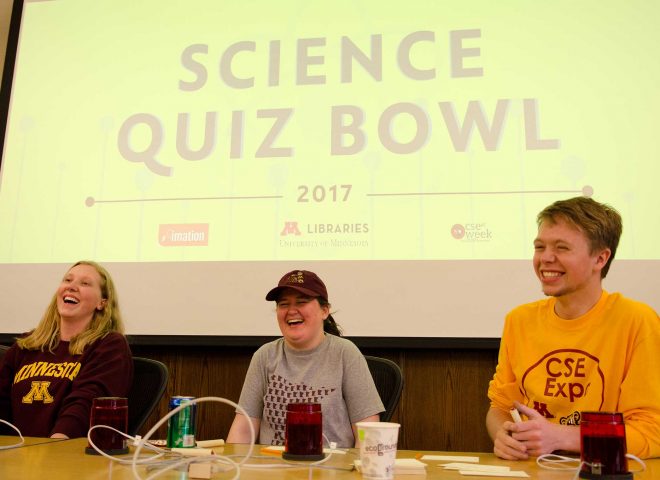 Roulette Wheel were the winners of the 2017 Science Quiz Bowl, held April 23 at Walter Library. The championship was a battle of Science Quiz Bowl veterans. Roulette Wheel is a returning team of grad students who emerged undefeated this year. Their quick responses on toss-ups and broad science knowledge served them well throughout the day. 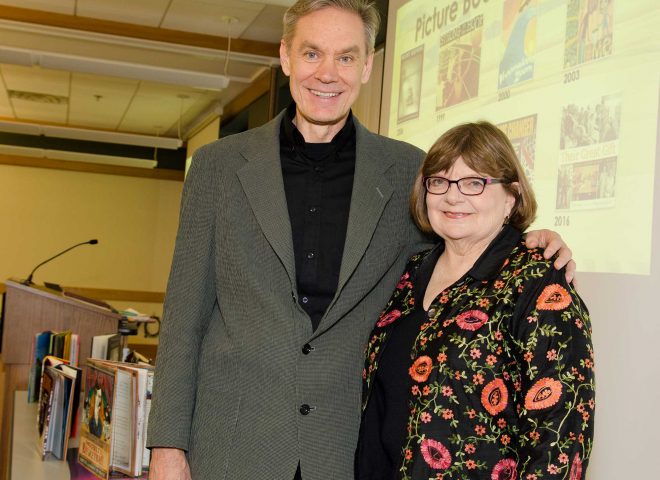 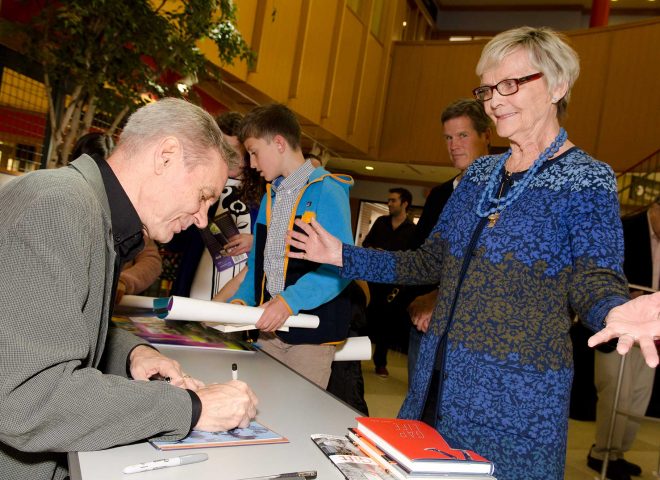 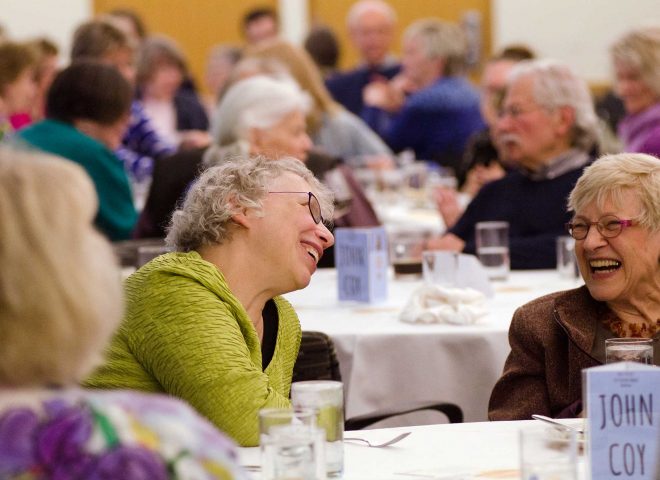 John Coy whose most recent books are Their Great and Gap Life, was the winner of the 2017 Kerlan Award from the University of Minnesota Libraries’ Friends of the Kerlan Collection. He received the award April 29 at the Kerlan Award Luncheon.

The Kerlan Award is given annually in recognition of singular attainments in the creation of children’s literature and in appreciation for generous donations of unique resources to the Kerlan Collection for the study of children’s literature. Past winners have included Wanda Gag, Tomie dePaola, Jane Yolen, Don Freeman, Nikki Grimes, and Kate DiCamillo.