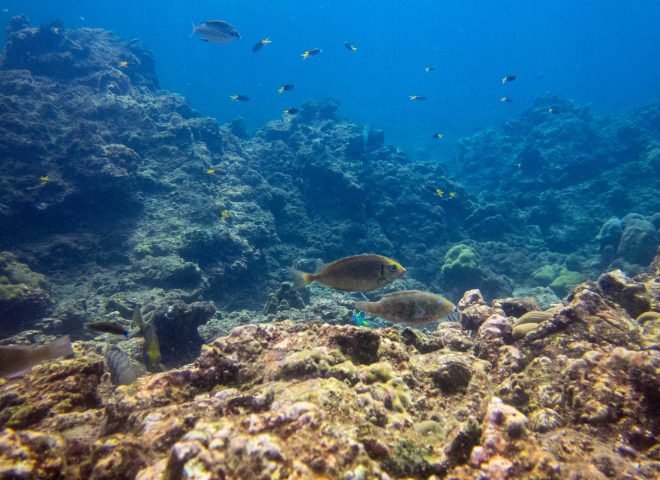 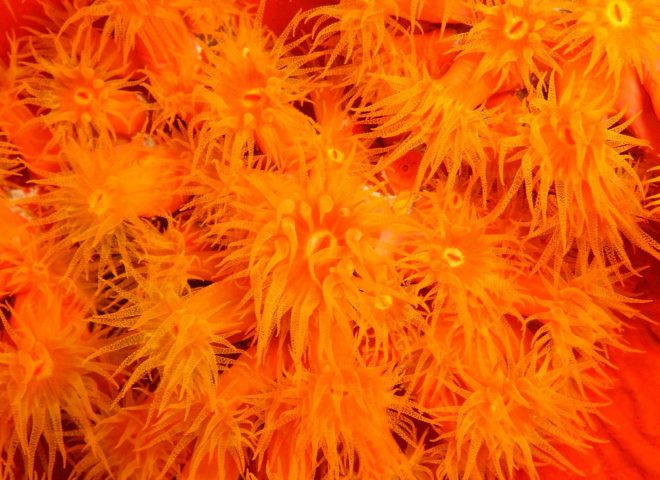 In her Pulitzer Prize-winning book, The Sixth Extinction: An Unnatural History, Elizabeth Kolbert writes about the effects of coral bleaching and how the stony coral are among the most endangered groups on the planet.

Read the excerpt below:

“…perhaps most significant on the list of hazards is climate change—ocean acidification’s equally evil twin. Tropical reefs need warmth, but when water temperatures rise too high, trouble ensues. The reasons for this have to do with the fact that reef-building corals lead double lives. Each individual polyp is an animal and, at the same time, a host for microscopic plants known as zooxanthellae. The zooxanthellae produce carbohydrates, via photosynthesis, and the polyps harvest these carbohydrates, much as farmers harvest corn. Once water temperatures rise past a certain point—that temperature varies by location and also by species—the symbiotic relation between the corals and their tenants breaks down. The zooxanthellae begin to produce dangerous concentrations of oxygen radicals, and the polyps respond, desperately and often self-defeatingly, by expelling them. Without the zooxanthellae, which are the source of their fantastic colors, the corals appear to turn white—this is the phenomenon that’s become known a “coral bleaching.” Bleached colonies stop growing and, if the damage is severe enough, die. … A study of more than eight hundred reef-building coral species, published in Science in 2008, found a third of them to be in danger of extinction, largely as a result of rising ocean temperatures. This has made stony corals one of the most endangered groups on the planet: the proportion of coral species ranked as “threatened,” this study noted, exceeds ‘that of most terrestrial animal groups apart from amphibians’.”

About the Lecture featuring Elizabeth Kolbert

“Homo sapiens may have enjoyed brilliant success but we have done so at the expense of virtually every other species.” In her fascinating, Pulitzer Prize-winning work The Sixth Extinction, Elizabeth Kolbert draws on extraordinary field work and both intellectual and natural history, revealing just how destructively we humans have affected our planet.

What: The Sixth Extinction
Who: Elizabeth Kolbert
When: Thursday, April 13, 7:30 p.m.
Where: Carlson Family Stage, Northrop

Book sales and book signing by the author to follow the lecture.

Elizabeth Kolbert has been a staff writer for The New Yorker since 1999. Her 2015 Pulitzer Prize for General Nonfiction, The Sixth Extinction: An Unnatural History, a book about mass extinctions, weaves intellectual and natural history with reporting in the field, and was a New York Times 2014 Top Ten Best Book of the Year and is number one on the Guardian’s list of the 100 Best Nonfiction Books of all time.

As with Field Notes from a Catastrophe, The Sixth Extinction began as an article in The New Yorker. She has written dozens of pieces for the magazine, including profiles of Hillary Clinton, Mayor Michael Bloomberg, and former Mayor Rudolph Giuliani. She recently won the Walter Sullivan Award for Excellence in Science Journalism from the American Geophysical Union. Prior to joining the staff of The New Yorker, Kolbert was a political reporter for The New York Times.

Our University of Minnesota co-sponsors

Thanks to our University of Minnesota co-sponsors for making this event happen: University Honors Program, School of Journalism and Mass Communication, Bell Museum and Planetarium, College of Biological Sciences, College of Liberal Arts, College of Science and Engineering, Global Programs and Strategy Alliance, Institute on the Environment, and Institute for Advanced Study.

Thanks to MinnPost, our Media Sponsor for this event. MinnPost is a nonprofit, nonpartisan enterprise whose mission is to provide high-quality journalism for people who care about Minnesota.

Thanks to our Community Partners for helping to spread the word about this event: Fresh Energy; Friends of the Mississippi River; Climate Generation: A Will Steger Legacy; Izaak Walton League – Minnesota Division; Minnesota Environmental Fund; Minnesota Interfaith Power and Light, Minnesota Renewable Energy Society; MPIR and link; Take Action MN, The Loft Literary Center; The Nature Conservancy; and the University of Minnesota Bookstore.