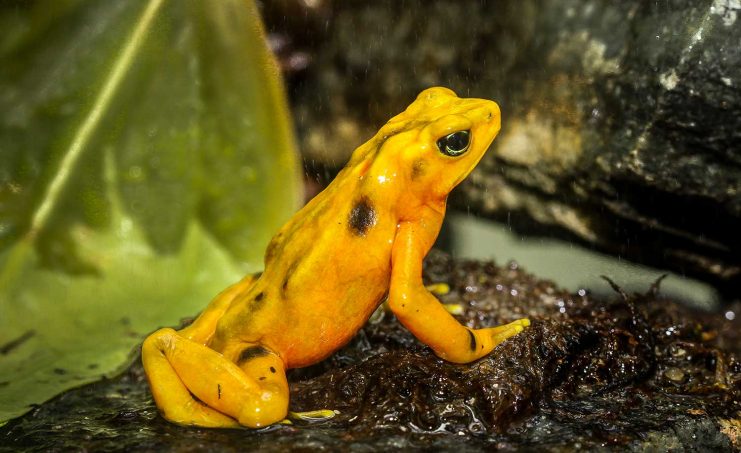 In her Pulitzer Prize-winning book, The Sixth Extinction: An Unnatural History, Elizabeth Kolbert writes that amphibians are the most endangered class of animals.

Read the excerpt below:

“Today, amphibians enjoy the dubious distinction of being the worlds’ most endangered class of animals; it’s been calculated that the group’s extinction rate could be as much a forty-five thousand times higher than the background rate. But extinction rates among many other groups are approaching amphibian levels. It is estimated that one-third of all reef-building corals, a third of all fresh-water mollusks, a third of sharks and rays, a quarter of all mammals, a fifth of all reptiles, and a sixth of all birds are headed toward oblivion.”

About the Lecture featuring Elizabeth Kolbert

“Homo sapiens may have enjoyed brilliant success but we have done so at the expense of virtually every other species.” In her fascinating, Pulitzer Prize-winning work The Sixth Extinction, Elizabeth Kolbert draws on extraordinary field work and both intellectual and natural history, revealing just how destructively we humans have affected our planet.

What: The Sixth Extinction
Who: Elizabeth Kolbert
When: Thursday, April 13, 7:30 p.m.
Where: Carlson Family Stage, Northrop

Book sales and book signing by the author to follow the lecture.

Elizabeth Kolbert has been a staff writer for The New Yorker since 1999. Her 2015 Pulitzer Prize for General Nonfiction, The Sixth Extinction: An Unnatural History, a book about mass extinctions, weaves intellectual and natural history with reporting in the field, and was a New York Times 2014 Top Ten Best Book of the Year and is number one on the Guardian’s list of the 100 Best Nonfiction Books of all time.

As with Field Notes from a Catastrophe, The Sixth Extinction began as an article in The New Yorker. She has written dozens of pieces for the magazine, including profiles of Hillary Clinton, Mayor Michael Bloomberg, and former Mayor Rudolph Giuliani. She recently won the Walter Sullivan Award for Excellence in Science Journalism from the American Geophysical Union. Prior to joining the staff of The New Yorker, Kolbert was a political reporter for The New York Times.

Our University of Minnesota co-sponsors

Thanks to our University of Minnesota co-sponsors for making this event happen: University Honors Program, School of Journalism and Mass Communication, Bell Museum and Planetarium, College of Biological Sciences, College of Liberal Arts, College of Science and Engineering, Global Programs and Strategy Alliance, Institute on the Environment, and Institute for Advanced Study.

Thanks to MinnPost, our Media Sponsor for this event. MinnPost is a nonprofit, nonpartisan enterprise whose mission is to provide high-quality journalism for people who care about Minnesota.

Thanks to our Community Partners for helping to spread the word about this event: Fresh Energy; Friends of the Mississippi River; Climate Generation: A Will Steger Legacy; Izaak Walton League – Minnesota Division; Minnesota Environmental Fund; Minnesota Interfaith Power and Light, Minnesota Renewable Energy Society; MPIR and link; Take Action MN, The Loft Literary Center; The Nature Conservancy; and the University of Minnesota Bookstore.