The Bio-Medical Library is hosting Body and Self by Emily Beron as the next installment in its rotating Art@Bio-Med exhibition series.

The Body and Self exhibit highlights two of Beron’s watercolor series — Regress and Skin.

At the time Beron painted the series Regress, she was experiencing disharmony with her body.

Beron says she made these pieces because she felt like no matter how hard she tried to be in control, her body felt like it was falling apart.

“I was feeling sick a lot of the time, and I couldn’t figure out why,” says Beron. “Every day I was plagued by my symptoms. As I worked through these ailments physically, I expressed my feelings through paint.”

The smaller pieces in the exhibit are a series called Skin. Beron describes the series, “It’s about feeling literal comfort in my own body.”

Since the time she painted the Regress series, Beron has discovered veganism, which eliminated the sickness she felt entirely.

“Not feeling sick all of the time has freed me to do things I love,” says Beron. “These pieces are about something that happens to me when I’m swimming in the sea — I become entirely aware of my Self and my Body due to literally being out of my element.

“It’s the about the surreal experience of being alive in this body, floating in an enormous ocean, on a planet, in a vast universe.”

Throughout her education at the Minneapolis College of Art and Design, Emily Beron developed an interest in the human figure. The body held interest for her because of its scientific transparency, as well as its ability to be a total mystery.

Watercolor lends itself to the ephemeral nature of the themes in Beron’s paintings, having a transient quality; it often creates unexpected results as it dries. Muted color palettes and dissolving or blurring edges aesthetically tie the material to the fluid, and the ever-changing nature of the inner-workings of the body.

For her entire life, Beron felt physically unwell. Battling with digestive issues and nausea on a daily basis was a struggle. As an adolescent, her artwork revolved around dark themes. The issues peaked in adulthood. They became overwhelming and she had a hard time getting through each day.

Beron expressed her struggle for control through paint. Feeling sick daily — and having that become the norm — was frustrating. Her paintings explore themes of the quiet daily battles each one of us go through, big or small. After much trial and error, medication and herbal supplements, Beron adopted a vegan lifestyle and her sickness was eliminated. She had the freedom to embrace things she loved and not focus on how bad she felt. Beron celebrates this through her most recent paintings as well — depicting an exaggerated blissful moment, or imagined idea of a surreal experience represented on paper. 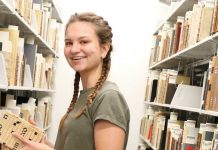