The University of Minnesota Archives staff wishes Head Coach Tracy Claeys and the Gopher Football Team good luck as they open their 2016 season against Oregon State on September 1 at TCF Bank Stadium!

In the early 1920s, University of Minnesota faculty, students, staff, and alumni banded together in an unprecedented effort to raise almost $2 million for two major campus building projects. The first project was Memorial Stadium, which would pay tribute to the men and women of Minnesota “who fearlessly sacrificed themselves in the great war.”

A brochure rallying the University community to the cause praised the virtues of an on-campus stadium, “Minnesota’s program of comprehensive physical education…is set towards supervised play, and exercise in rugged types of games. Upon the foundation thus built will scholastic training securely rest and normally function.”

The dedication of Memorial Stadium and inaugural game on November 15, 1924 would stand as a significant day for the University.

Not only did the football team come away with a stunning victory over the University of Illinois, and its legendary halfback Red Grange, but the campus began a decades-long tradition of having a bustling stadium venue that hosted battles on the gridiron in addition to commencement ceremonies, faculty research, track meets, statehood centennial events, and even an opera.

In 1982 the decision was made — still seen as controversial by some alumni and Gopher fans — to move the Gopher football team to the newly opened Metrodome in downtown Minneapolis.

After the move and the efforts of various “save the stadium” campaigns stalled, Memorial Stadium became a fenced-off and increasingly desolate corner of campus. In 1992, it was demolished.

The physical structure is gone, but Memorial Stadium lives on for many University alumni, Gopher fans, and community members. To explore the history of the stadium and its central role in the life of the University, please visit Brickhouse: Memorial Stadium, 1924-1992, an online exhibit highlighting the rich archival resources of University Archives. We hope the site continues to capture, and perhaps strengthen, the spirit of Memorial Stadium. 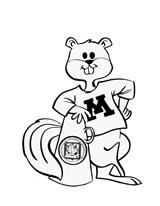