We couldn’t believe it – 11,586 reels of recorded audio are preserved at the University Archives. These reels contain recordings of University speeches, ceremonies, and conference proceedings given from the 1940s to the 1990s. The reels also contain the recorded broadcasts of WLB/KUOM, the predecessor of University radio station RadioK. 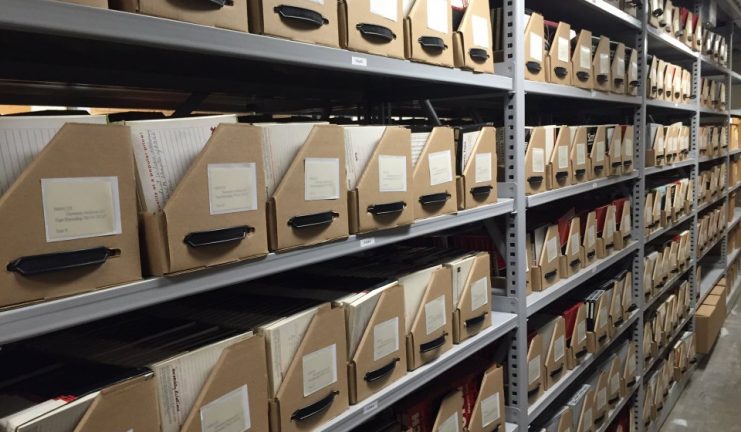 A grant from the Minnesota Arts and Cultural Heritage Fund of the Minnesota Clean Water, Land and Legacy amendment has allowed University Archives to catalog and capture unique metadata for every reel. Another Legacy grant, recently awarded, will facilitate the digitization of more than 2,000 reels.

There is a strong representation of audio content related to the history of the University, such as convocations, commencements, and inaugurations of University presidents. There are also many recordings specific to the University Libraries.

Many recordings illuminate the history of Minnesota as well as the world beyond state borders. Nearly every major political figure in the state appeared on Public Affairs, a long-running KUOM program, including governors (Perpich, Quie, Andersen), senators (McCarthy, Humphrey, Durenberger), and even a vice president named Mondale. Programming addressed the political, social, economic, and environmental issues impacting Minnesotans, as discussed by lawmakers and other state officials.

National and international leaders who spoke at the University and throughout the Twin Cities in various capacities were recorded and broadcasted for the KUOM listening audience.

The arts and cultural heritage of Minnesota was shared through regular program series such as “Artist and Archives,” “Guthrie Greenroom,” and broadcasts of the Minneapolis Symphony (Minnesota Orchestra) previews and performances. The voices of many Minnesota literary figures and members of the theatrical profession are also captured on the reels.

The station also broadcasted programs that addressed issues of diversity and equality.

WLB/KUOM broadcasts were for all ages. From 1938 until 1979, the station produced The Minnesota School of the Air, a series of programs for listening audiences in public and private schools. The station collaborated with local school districts and the State Department of Education to produce original radio programs that aided the instruction of schoolchildren.

For over 20 years, these 11,586 audio reels (plus an additional 193 cassette tapes) sat silently in storage collecting — a lot of — dust. These recordings were inaccessible due to erroneous box/tray lists and lack of playback equipment. Processing and digital conversion will allow University Archives to provide the ultimate preservation measure for these materials.

In the 1940s, the station printed program bulletins with the tag line, “The Voice of the University of Minnesota.” Soon that voice will again be heard.