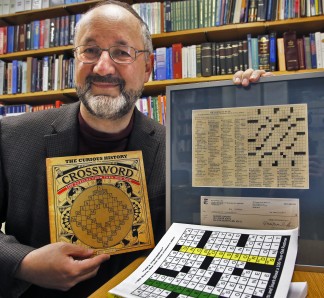 I am a Chemistry Professor at the University of Minnesota, but for much of my life, have had a fascination with mathematics, language, and all sorts of puzzles — usually as a solver rather than as a creator.

Though I had dabbled in crossword puzzle construction since the late 1990s and had a few small successes — inevitably with a more experienced mentor/collaborator — it wasn’t until after my kids were adults away at school and both my parents had passed away, that enough discretionary time opened up for me to make the necessary commitment to the art.

By now, I am the informal leader of a consortium of about a hundred like-minded friends, only about a third of whom I’ve met in person (quite a few of those based in the Twin Cities), who work together on creating puzzles. Some of these puzzles have been published in venues such as the New York Times, Los Angeles Times, Chronicle of Higher Education, and Wall Street Journal (for example, this puzzle with Marcia Brott, published in the WSJ in January 2015) while most of the rest make their way to a website that we’ve established. At last count there were over 400 puzzles at the site, all free to interested solvers.

What tools/software/hardware/etc do you use to do your work?

By convention, a typical “daily” puzzle has dimensions of 15×15, has 72 to 78 words, a maximum of 38 black squares (16%), and so-called crossword symmetry. A “Sunday” puzzle is larger, typically 21×21, 140 words, other features “in proportion.” Most puzzles have themes, some of which can be quite tricky, but themeless puzzles (typically with lower word counts and fewer black squares) are also popular, especially for Fridays and Saturdays.

When I first started constructing, I took a do-it-yourself approach with retrofitted Excel spreadsheets and tedious manual internet searches, but once I got serious, I bought a program called Crossword Compiler, which runs on PC/Windows and is pretty much the industry standard (though there are excellent software alternatives that some of my friends use, such as CrossFire and Crossdown).

Having software improves productivity and cuts down on what I would call clerical errors (misnumbering entries, losing track of symmetry, etc.), but is not a substitute for the creativity and originality needed to devise good themes, nor the judgment and experience to find reasonable words and phrases that “fill” the grid, as well as selecting accurate, interesting, and fair clues for them.

Sampling of Tools
• Crossword Compiler
• xwordinfo.com
• Google Docs
All but the most casual of constructors also have access to multiple word lists, as well as subscription databases such as xwordinfo.com and cruciverb.com, and a free site called onelook.com. I don’t have personal experience with a site called Qxw, but several of my friends find it useful. Before getting too deep into any particular crossword project, it’s important to do a certain amount of due diligence to find out what has been done before that could be similar.

A few years ago, I wrote this essay which has more nuts-and-bolts information. I like to would stress the importance of peer review in creating top-notch puzzles. In this regard, I’ve certainly benefitted from the experiences and insights of numerous highly creative and accomplished individuals, and would like to think that I have been able to provide some of the same to others.

One tool that we use for collaborative crossword projects is Google Docs, specifically the word processing and the spreadsheet platforms. It’s really a great way to coordinate the input of several people. For example, we suggest potential theme entries, displayed in all-capitals in a constant-width font like Courier; this allows rapid visual inspection of a list to ascertain the needed symmetries.

We can also brainstorm and dialogue, in the body of the document or in the comments, and everything is neatly archived if we need to refer to it again later in the project. After a member of our group sketches out one or more grids, we take screen shots and paste them into the document, and we also create lists of answer words/phrases with room to suggest potential clues.

What do you love about what you do?

Crossword construction can be a lonely and solitary activity, but I believe that the way that I’ve personally organized it, there is also a rewarding social component. I never know when or how an idea might strike me, and I try to always be welcoming when someone approaches me with an idea of their own. Quite a few of my puzzles could never be published for any number of reasons, but I enjoy working on them nevertheless. Our group has also sponsored two very successful contests, Enigma Variations and Eliminating the Competition, each of which had fun prizes and made us new friends.

Our tongue-in-cheek motto is “We put the ‘fun’ into ‘dysfunctional,’” but a more serious one might be “Forging community through wordplay.” We’ve used puzzles to celebrate birthdays and anniversaries, announce marriages and births, pay tribute to people—famous or otherwise—who have passed away, commemorate historical events, provide commentary on politics and current events, and pay homage to my interests in math and science, music, and sports. One notable feature of our crossword site is that quite a few of the puzzles have “midrashim” which combine authors’ notes about the puzzle in general with annotated explanations of specific answers.

In summary, my activities in creating crossword puzzles, coupled with the social network they have created, have provided me with endless hours of pleasure and unmitigated fun.

Note from the librarian 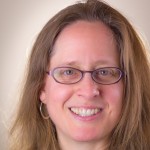 Look for giant versions of George’s crossword puzzles during Study Break around the Libraries, and check out all the fun finals week activities at libraries around campus!