Sometime as the last leaves fell or first snows frosted the ground, we received a telephone call that led to a new and very pleasant adventure, or more appropriately, string of adventures. Our caller was Linda Brown, local organizer of a sub-group within an organization called “Meetup.” We had never heard of Meetup before, but quickly learned that its members were a very motivated group of people interested in learning more about the world around them. 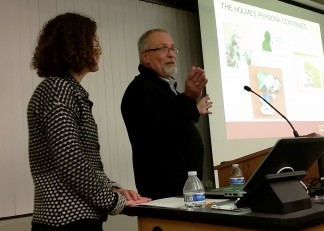 Meetup’s website describes its organization as “the world’s largest network of local groups.” The site, which acts as a portal to gatherings organized around various interests, helps people organize these groups, publicize their activities, or assist in locating “one of the thousands already meeting.” Meetup currently claims nearly 25 million members meeting in almost 232,600 groups across 181 countries. They report almost 576,800 monthly meetings with over four million RSVPs for these events.

Linda’s group is organized around museums and other cultural memory institutions such as libraries and historical sites. She describes the folks who come together as “fun and interesting people who share a common interest in all kinds of creative and visual arts as well as architecture, science, and history.” Linda schedules as many as six to 10 tours a month, and admits that they “give broad meaning to the word museum.”

When Linda first contacted us about the possibility of bringing her group to Andersen Library and seeing the Sherlock Holmes Collections, I heard excitement in her voice. Knowing little about how her group functioned, I asked her how many people we might expect. She said there could be as many as a hundred! Now, we’ve handled large groups in the past — witness our experience with accommodating nearly 200 visitors during a national Jane Austen convention — but on this occasion it would be just two curators, Cheryll Fong and myself, to welcome visitors. Reluctantly, I told Linda that the most we could handle on any one visit would be forty people. We agreed to cap the registration at that number, create a waiting list, and see how things developed.

In the meantime, Linda posted information about the program on her local website. Once again, the thrill of pulling this visit together was evident. “You may frequently hear me say I’m excited about a Meetup,” she wrote, “while that is true whenever I say it, this time I can honestly say that this is probably the one I am most excited about.” She explained that for “several years” she dreamt of visiting the Holmes Collections. “I have been a Sherlock Holmes fan for as long as I can remember….Word has it that this collection is simply amazing, I’m counting the minutes.”

Others in the group must have sensed her excitement. Before too long, registration hit our cap of 40 while the waiting list expanded to an amazing 65. Clearly, people were interested in Holmes and our collections.

Cheryll and I went to work, gathering a representative sample from the Collections for exhibit including one of our  manuscript pages from The Hound of the Baskervilles, an original Frederic Dorr Steele illustration, some of Doyle letters, an 1891 issue of The Strand magazine, Edith Meiser radio scripts, and other treasures. With materials gathered and set for display, we welcomed our guests. Following our presentation on Holmes and the Collections, we entertained questions before dividing the group and heading out on tours. Cheryll and I stayed late to answer any lingering questions and continued conversations.

By all reports, our first encounter with the museum Meetup group was a rousing success. As the evening wrapped up we were well on the way to planning a second gathering. As Linda later reported, “The first presentation and tour lived up to our expectations….Even people who said they weren’t big Sherlock devotees enjoyed the evening,” Two weeks later, again on a Friday evening, we hosted our second group of 40. There were at least a few people who so enjoyed themselves during the first visit that they decided to come back for the second installment. 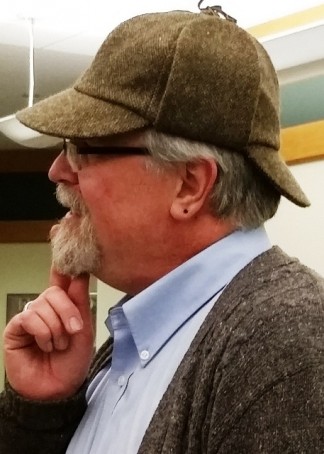 Maybe we shouldn’t have been surprised when Linda informed us that there was yet another waiting list of nearly 40 people. “Attention Sherlockians!” she exclaimed on her website. “There were still so many people on the waitlist for the second presentation of the Sherlock Holmes collection and tour of the Anderson Libraries, I promised to try to arrange a third visit.” She promised, and we delivered. We launched our third presentation and tour a few weeks later.

For the moment, our new friends from Museum Meetup in the Twin Cities have moved on to new venues and further adventures. Cheryll and I had the pleasure to host a remarkable gathering of individuals over the course of two months. We’re fairly certain, given comments and ratings (5 out of 5) following their visits, and the level of excitement experienced during our time together, that we will see them again in the near future.