Ignaz Semmelweis (1818-1865) was a Hungarian physician best known for his early contributions to antiseptic procedures. His work in this field was documented in his 1861 study, The Etiology, the Concept and the Prophylaxis of Childbed Fever.

Only 25 copies of Semmelweis’s 1861 text remain cataloged across the globe. The cover page on the right is from the copy housed at the Wangensteen Historical Library of Biology and Medicine.

The role of obstetrics

The table below shows the maternal mortality difference as approximately three fold. This was, in fact, an underestimation due to mitigating factors Semmelweis discusses in his text. The actual difference in mortality, according to Semmelweis, was closer to a factor of ten. 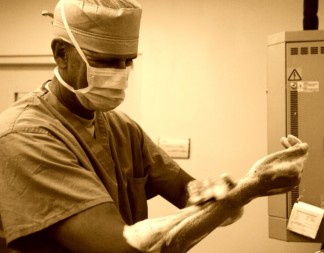 So, what accounted for this extreme variation between the two divisions? Semmelweis asserted that there were “invisible cadaver particles, recognizable only by their odor” that the obstetricians and students transferred to their patients after they had been dissecting cadavers (a practice not undertaken by midwives).

To combat this transmission, Semmelweis suggested the implementation of a hand washing protocol using chlorine solution in both divisions. In the first full year this protocol was in effect, the maternal mortality rates for the two divisions were 1.2% and 1.3%, respectively.

Although Semmelweis’s antiseptic ideas were initially met with considerable resentment from many members of the medical and scientific community, today they are embraced as the symbol of a great leap forward in medical practice.