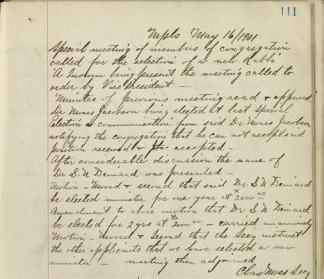 Donated to the Upper Midwest Jewish Archives earlier this spring, the ledgers were originally found during construction, hiding away under the floorboards. Previous to finding these books there was limited documentation in the Archives of Temple Israel during the founding years of the congregation through the leadership of Rabbi Samuel N. Deinard in the early 20th century. Temple Israel kindly donated the materials to the Archives along with the funds to digitize the four ledgers in their entirety, opening them up for use to researchers around the globe.

Temple Israel, originally called Shaarai Tov (Gates of Goodness), was founded in Minneapolis in 1878 by German-speaking Jewish merchants. Their first house of worship, built in 1880, was located on Fifth Street between First Avenue (later Marquette Avenue) and Second Avenue South; in 1888 they would move to Tenth Street and Fifth Avenue South. In 1901, Shaarai Tov hired Rabbi Samuel N. Deinard, an influential rabbi who helped grow the congregation. He acted as mediator between his Americanized congregants and the Eastern European Jewish immigrants who lived in North Minneapolis. Deinard also founded the still-popular local Jewish weekly newspaper, the American Jewish World, in 1912. In 1914, the congregation moved again, this time to the corner of West Twenty-Forth Street and Emerson Avenue South, and in 1920 changed their name to Temple Israel. 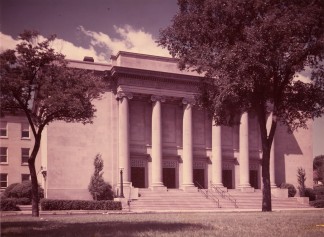 In 1928, a new synagogue was built on the same site by the firm of Jack Liebenberg and Seeman Kaplan; this neoclassical revival-style building stands as a landmark overlooking Hennepin Avenue in Uptown Minneapolis. Temple Israel remains vibrant in the community and is one of the ten largest congregations in the United States.