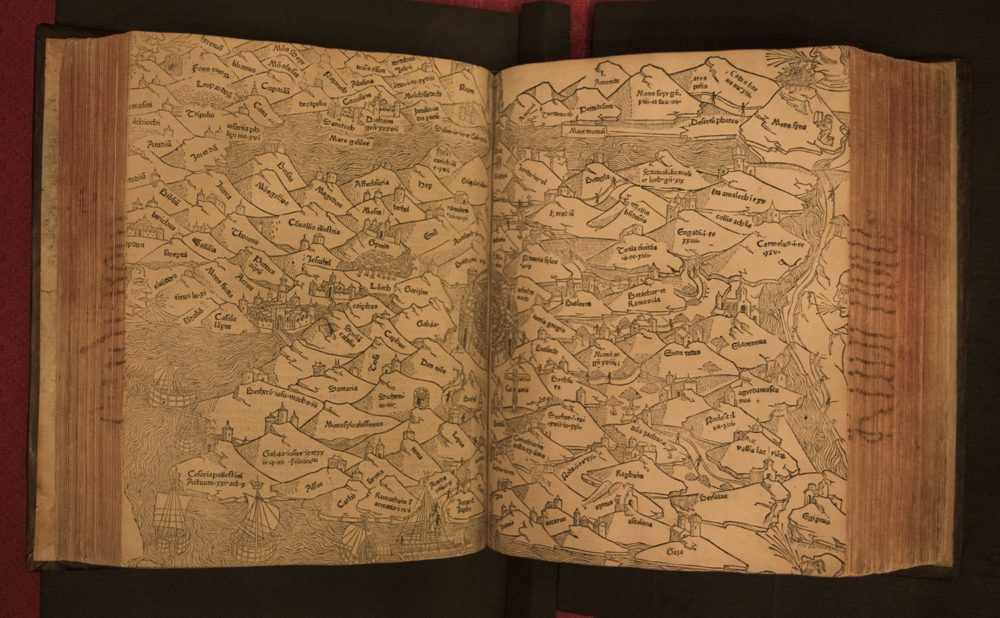 “The Rudimentum Novitiorum is one of the rarest and most significant pieces we have,” said Dr. Ford W. Bell, trustee and the grandson of James Ford Bell, who was the founder of General Mills. “We are thrilled to have acquired it and are looking forward to sharing it.” 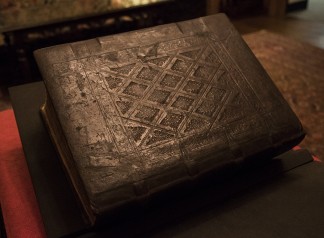 Written in Latin and roughly translated as “Handbook for Beginners,” the 474-page volume was intended as an encyclopedic collection of human knowledge, incorporating history, geography, and scripture. Its authorship is unknown but it was printed in Lubeck, Germany, then a principal European trading center, shortly after the invention of printing on the Gutenberg press in the 1450s.

“The Rudimentum was intended to educate the novice in the history of the world. Popular education was crucial to the European Renaissance and the success of the Hanseatic League trading countries,” said Daniel Crouch, a London-based rare book expert and renowned map dealer. The recent invention of printing meant that knowledge could now be widely distributed beyond the wealthy and the church nobility.

Among the Rudimentum’s thick 18-by-12-inch folio pages and some 150 pictorial woodcuts, the most important are those that contain what are said to be the first printed maps. The maps incorporate Biblical history and mythology, including the Garden of Eden and the Pillars of Hercules, suggesting that they were not intended to be literal, but rather broad teaching aids for new learners.

The first is a map of the world in a circular form, with a hill representing each country. The second is a more familiar-looking map of the Holy Land, which features Jerusalem at its core and the Red Sea to the south.

The rare volume “is exactly what James Ford Bell envisioned for his library, which is showing the growth of human knowledge through trade. There are very few books that do that as well as the Rudimentum,” Crouch said.

“As part of the first information revolution including the first printed history of the world, the Rudimentum is the ‘Wikipedia’ of its time,” Ford Bell and fellow trustee Diane B. Neimann said in a letter to the University of Minnesota’s James Ford Bell Library.

“This recent addition shines a light on the Bell collection, already one of the best in the world, and we are thrilled to make it available as an important resource for scholars and the public alike, ” said Wendy Pradt Lougee, University Librarian, University of Minnesota.

The Rudimentum Novitiorum will be on initial display at the James Ford Bell Library now through January 31, 2016.

About The James Ford Bell Library

The James Ford Bell Library documents the history and impact of international trade prior to ca. 1800 C.E. Its premier collection of rare books, maps, and manuscripts illustrates the ways in which cultural influence expanded worldwide, with a special emphasis on European interactions. Through its collections, and innovative programs, The Bell Library supports scholarship and education at all levels, and enriches our community.

About the James Ford Bell Trust

The James Ford Bell Trust is best known for its strategic acquisitions with the purchase of the second most expensive printed rare map ever sold, Matteo Ricci’s 1602 “Impossible Black Tulip.” It is a massive map showing the world with China at its center and the first in Chinese to show the Americas, and to incorporate both Eastern and Western cartography.