“The University of Minnesota Libraries has a well-deserved reputation for excellence and visionary leadership,” Stewart said. “I’m thrilled to be joining the team at Minnesota as the University implements a new strategic plan and the Libraries continue to redefine our role as partners in research and learning.”

The Libraries, in partnership with Penumbra Theatre Company, received $150,000 from the Doris Duke Charitable Foundation to support the adoption and use of “Umbra: Search African American History.” This freely available online search tool, when it goes live early in 2016, will provide access to digital materials on African American history and culture from around the country.

Test out the beta version at umbrasearch.org/.

Last fall, Tawani Foundation generously awarded a major multi-year grant to the Jean- Nickolaus Tretter Collection in Gay, Lesbian, Bisexual and Transgender Studies at the University of Minnesota Libraries for the purpose of documenting the historic and contemporary experience of transgender individuals in the Upper Midwest.

This past spring, Andrea Jenkins was hired for the project. She will lead the project, which will collect up to 400 hours of oral histories from 200 to 300 people over the next three years in support of the Upper Midwest transgender community.

Rafael Tarrago (center in photo at right), Librarian for Iberian, Ibero-American and Chicano/Latino Studies, History and Political Science, is a recipient of the 2015 President’s Award for Outstanding Service. This award is presented each year and recognizes exceptional service to the University, its schools, colleges, departments, and service units by any active or retired faculty or staff member.

The Digital Public Library of America (DPLA), the nation’s premier online digital library, has collaborated with the Minnesota Digital Library at the University of Minnesota to complete a tenfold increase in the number of digital items from Minnesota available on its website.

This collaboration presents Minnesota culture and history to the world through high-quality scans of photographs, original manuscripts, videos, artwork, maps, and more. The 426,000 new items come from the collections of seven prominent Minnesota institutions:

The Libraries is raising funds to make Al Haug’s recordings of West Bank music more readily accessible by digitizing cassette tapes, open reels, and other materials. An anonymous donor has given seed funds to start this project and has pledged a dollar-for-dollar match for additional contributions.

Two years ago it was announced that Haug’s collection of West Bank materials – the Minnesota Folk Music Archives – was going to the Libraries’ Performing Arts Archives. The collection is now fully cataloged and available for research.

In a tight contest involving 63 entries, the Libraries’ 2015 Student Photo Contest ended with a tie for 1st place and a tie for 3rd place. The annual contest is sponsored by the Friends of the University of Minnesota Libraries.

Judging for 1st, 2nd, and 3rd place was done by three graduate students in photography in the University’s art department, the chair of the Friends of the Libraries awards committee, and two members of the University Libraries communications team.

The results for the Student Choice Award were based on the number of likes each photo received on the Libraries’ Facebook page.

Erin George and Kristen Mastel won this year’s Friends of the University of Minnesota Libraries Staff Development Grant Awards. George is an Assistant Archivist at the University of Minnesota Archives, and Mastel, pictured with Donna Barbour-Talley of the Friends of the Libraries, is an Outreach and Instruction Librarian and liaison to the College of Continuing Education, Extension, and Agricultural Education.

Emily Atchison and Andrew Nelson are this year’s recipients of the Friends of the University of Minnesota Libraries Student Employee Awards. Atchison has worked in the Tretter Collection for the past two years, showing extraordinary leadership and making a transformational difference in the collection. Nelson assists the Libraries Exhibits Designer and is involved with all the stages of exhibit design and production.

Learn more about DRUM at z.umn.edu/drum.

The University of Minnesota approved a new Open Access to Scholarly Articles policy, which took effect January 1. The policy – initiated by faculty members and approved by the Faculty Senate – provides researchers with more options to make their research more accessible to the public. The Libraries is supporting this policy through the University Digital Conservancy and through consultation services that help authors understand publishing options, authors’ rights, and options in the University’s open access policy. 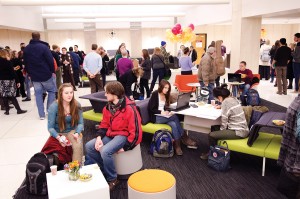 The Wilson Library first floor was jammed with students and library staff on December 3, as they celebrated the redesign of Wilson’s study and collaboration space that was completed earlier in the fall.

Actress Sally Wingert was the spokesperson for a Friends of the Libraries crowdfunding campaign to raise money to restore and preserve one of the Guthrie Theater’s costume bibles, which are stored in Elmer L. Andersen Library. A costume bible is a book created by a theater designer that provides sketches and fabric swatches about the costumes for a particular production. The campaign raised $3,200.

Watch the video featuring Wingert at: z.umn.edu/wingert or by clicking play on the video at right.

See all of the videos on our YouTube channel at z.umn.edu/readthisbook.

The Libraries’ leadership in key areas of service and technology was cited in the New Media Consortium’s 2014 Horizon Report Library Edition. The annual report examines key trends, significant challenges, and emerging technologies for their potential impact on academic and research libraries worldwide.

The report highlighted the University Libraries expertise in such areas as reducing student costs through its digital course pack initiative, its SMART Learning Commons, and its work to develop and expand data management services.

Kris Kiesling unveiled a portrait of Gov. Elmer Andersen in a private celebration last fall at Andersen Library. The portrait was donated by the family of local artist Louis Grendahl, who also painted Gov. Luther Youngdahl and President Harry Truman.

Prof. Moriarty’s skull delivered to U of M

Timothy Johnson, Curator of the Libraries’ Sherlock Holmes Collections, went the extra mile with a prank about discovering Prof. James Moriarty’s skull on April Fools’ Day this year. The “news story” confirming the death of Moriarty was a big hit on social media and on the continuum website, with more than 4,000 people visiting the web page on April 1.

Read the story at z.umn.edu/april. 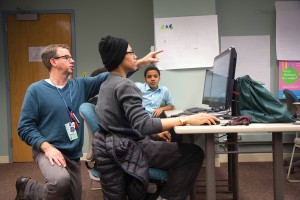 This spring, librarians Kristen Mastel, Marlys McGuire, and Wanda Marsolek at Magrath Library on the St. Paul campus hosted a series of educational workshops for 8th-grade students from Murray Middle School. Timothy Chase’s class visited the Libraries for six sessions to learn about academic research, to complete their own literature searches, and to craft messages using infographics.

Chase routinely incorporates experiential learning into his science curriculum. For example, his students have visited the Raptor Center, Wolf Ridge, Como Park, and other outdoor locations to complete class projects. This winter, the students took snow samples to learn more about the impact of climate change. Their work at Magrath Library gave them a chance to continue researching the topic and to communicate what they had learned with compelling visual messages.

“Mr. Chase and I feel that bringing the students onto a university campus provides an important experience,” said Mastel, who has worked with Chase since the collaboration began three years ago. “We are sending a message that students are welcome to use our resources. And we hope to encourage them to become future Gophers themselves.”

Magrath Library displayed some of the students’ infographic posters in June.

A legislative proposal that would benefit Minnesota doctors, nurses, health students, and patients received much support this past session but ultimately was not approved by the Minnesota Legislature. The Minnesota Electronic Health Library (MEHL) would provide health professionals, students, and the public with equal access to professional health information – information that could help address health disparities, shortages of providers in rural areas, and more.

Currently, only large health care organizations and large educational institutions, such as the University of Minnesota, are able to afford these online resources due to the hefty license fees associated with them. As a result, many smaller health systems – including many of Minnesota’s 79 rural hospitals – don’t have access to the best and most current health information. The initiative was led by Janice Jaguszewski, Director of the University’s Health Sciences Libraries, who said that MEHL likely will be brought forward again in 2017.