Minnesotans don’t have to travel around the world to see such items in person. The University of Minnesota Libraries has a treasure trove of materials like this – and much, much more – and it offers numerous access points for people to engage with them.

The Libraries’ deep roster of curators and archivists open windows to these wonders through exhibitions, speeches, and events both on and off campus. They aim to expose people of all ages to what lies inside the University’s massive archive to pique their curiosity and love of learning, and to let them know that it all belongs to them.

“This is Minnesota’s library. Anybody can come here and use these materials, but people don’t always know that,” says Linda Greve, Assistant to the University Librarian for Outreach and Grants. “Every collection has its own amazing stories to tell. We want everyone in the state to know what we have and to bring them here to see it.” 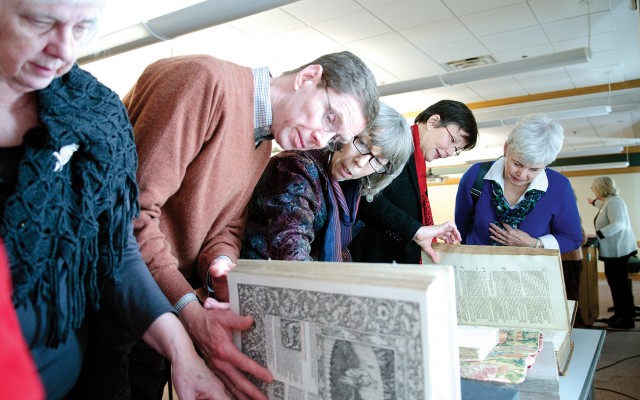 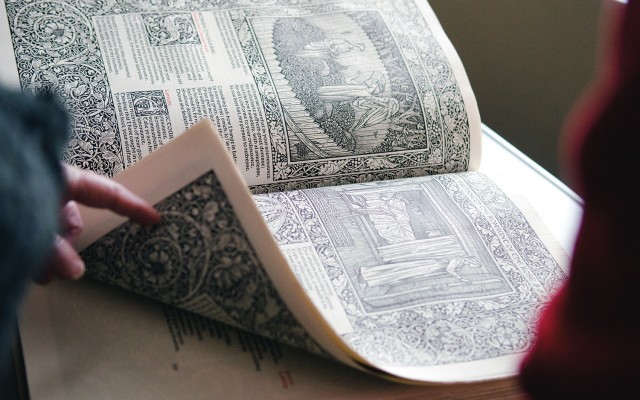 Rare Book in the Caverns 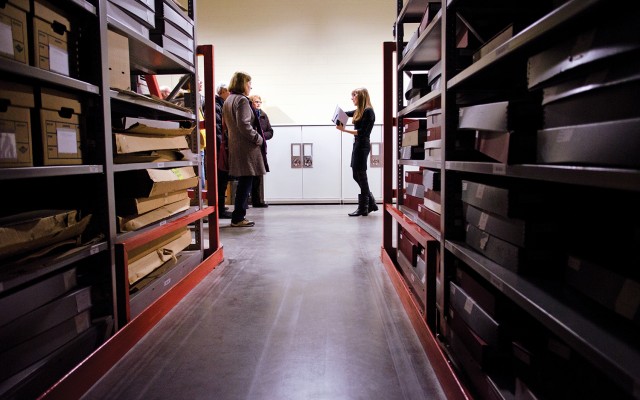 Kate Hujda in the Caverns
First Fridays and Archives Tours

And what the Libraries has is astounding: Immense underground caverns in the Elmer L. Andersen Library hold more than 1.5 million volumes, manuscripts, artifacts, and more. Many items belong to 18 specific archives and special collections, such as the Givens Collection of African American Literature and the information technology-focused Charles Babbage Institute.

Through four initiatives below, Minnesotans learn about what’s stored in those vaults and how it tells the story of our state, country, and the world.

On the first Friday of the month throughout the school year, scholars, archivists, Friends of the Libraries, and University community members gather for a lecture and discussion rooted in materials from one of the Libraries’ collections. This year the First Fridays series focused on the theme of power — the struggle for it and how people use it to drive change and reform in society.

In March, Curator Ellen Engseth shared documents and photos from the Immigration History Research Center and Archives. She demonstrated how various cultures — especially displaced people — preserve and perpetuate their heritage by documenting their history and traditions. Linnea Anderson, Curator at the Social Welfare History Archives, showcased photos and records that explain the evolution of adoption in the United States. She also highlighted items on display at the Elmer L. Andersen Library that detail how minorities and women worked to reform social welfare policy to better serve populations in need.

While attending First Fridays, many visitors tour the Andersen Library’s underground caverns, completed in 2000. Nestled deep into the bluffs of the Mississippi River, the giant caverns hold many of the University’s collections, as well as the Minnesota Library Access Center, which stores books for libraries across the state.

People are generally astounded at the scale of the caverns, with their endless rooms of 17-foot tall shelving containing boxes and boxes and boxes of material. The caverns’ constant temperature and relative humidity is perfect for preserving such items for the current and future use of all, says Kris Kiesling, the Elmer L. Andersen Director of Archives and Special Collections.

Road Show and Taste of the Treasures

With the belief that seeing is believing, the Libraries redoubled its efforts to highlight some of the archives’ crown jewels for the public. It started a few years ago with the Taste of the Treasures, in which curators conducted several speed-dating events on site. About a dozen curators presented items from their collections, from replicas of ancient sea charts to a Guthrie Theater costume bible, generated for each production, which includes fabric samples, drawings, and notes from designers.

These events were highly successful but very time-intensive, Greve says. As an alternative, the Libraries developed its Road Show series to serve more people. Curators created a menu of talks that show off various treasures from an archive — a speakers’ bureau of sorts. They speak to organizations, schools, senior residences, or others around the state, providing an opportunity for people to interact with some of the unique items archived at the University.

Johnson recently created another lecture on the Downton Abbey library and what tomes it might hold. He presented it to more than 60 members of the Vital Aging Network, a nonprofit that strives to engage senior citizens in the community. Johnson compiled numerous books from the 14th, 15th, and 16th centuries that likely were displayed at the real Downton Abbey, Highclere Castle, and he also spoke about the development of private libraries in English country houses and the relationship between the development of university libraries – Oxford and Cambridge – and private libraries of the aristocracy.

“It’s more than a show and tell,” says Johnson. “We try to give people a sense of the passion we have for the collections in terms of what we’re doing to acquire new collections that support the mission of the University, and how the materials are used in the classroom or for research. We give people a chance to look at stuff up close and personal, and we talk about what some of it means in a larger context.”

“So many of the people were fascinated by it. The majority weren’t aware of the depth and breadth of information in the Libraries and that it is open to us as citizens,” he says. “We see the library and the archives as a way to connect to the knowledge that we have in the state of Minnesota.”

Groups interested in a Road Show event can select from such talks as one by Marguerite Ragnow, Curator of the James Ford Bell Library, called “Myths, Maps, and Vikings of Early Scandinavia,” or “What Makes an Award-Winning Children’s Book” by Lisa Von Drasek, Curator of the Children’s Literature Research Collections.

“Any time we show anyone anything from the special collections, they are just gobsmacked,” says Greve. “We have an endless supply of stories to tell.”