Respect U – Libraries Call to Action

Respect U aims to highlight that Class of 2019 community is comprised of thousands of unique stories, backgrounds, identities, and experiences. 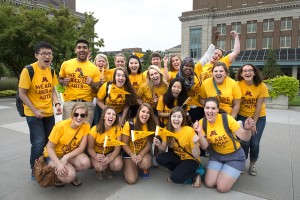 The University of Minnesota–Twin Cities will welcome the Class of 2019 to campus next week. At more than 5,700 students, it is one of the University’s largest freshman classes on record. Following move-in on August 31 and September 1, the U of M will kick off its Welcome Week activities.

One significant event during the week is Respect U Day on Friday, September 4. The event will expose students to critical issues that are important to the student community by highlighting the importance of creating a caring and inclusive campus environment.

The University Libraries Call to Action

How it went Down
By Kekla Magoon
African American; Young Adult

Love in the time of Cholera
By Gabriel Garcia Marquez
Colombian

Unbearable Lightness of Being
By Milan Kundera
Czech

Persepolis: The Story of a Childhood
By Marjane Satrapi
Iranian; YA; Graphic novel; Memoir