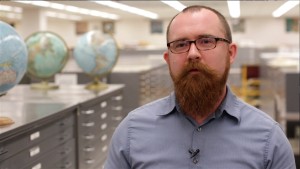 The Minneapolis photos, provided by the City of Minneapolis, were scanned and added to the Libraries’ existing Minnesota Historical Aerial Photographs Online collection, which includes more than 121,000 aerial photographs from around the state that date back to 1923.  The Libraries will preserve the original photographs and provided the city with the digital images.

Photos are used by students, public

The photos are used for research by students on campus said Ryan Mattke, head of the John R. Borchert Library. For example, he said, students in the department of Landscape Architecture might use the photos as part of a field study or site design project.

“So, they can look at a particular site in the city of Minneapolis and see how that site has changed over time, what different ways it was used, and then use that in their class work to project into the future what they think the site should be used for.”

But they’re also available for use by the public, including history buffs interested in seeing how an area of the city has changed over time.

Mattke used the west bank campus of the University of Minnesota as an example, showing how the area was primarily a residential district with single-family homes back in 1938. By the mid-1960s that changed as University buildings, including Wilson Library, replaced the houses and the Washington Avenue Bridge was re-aligned during a reconstruction.

“I think that this project is a great collaboration among the City of Minneapolis, the Minnesota Historical Society, and the University of Minnesota.”
—Ryan Mattke

“I think that this project is a great collaboration among the City of Minneapolis, the Minnesota Historical Society, and the University of Minnesota,” he said, adding that the three groups worked together “to make sure that these historical resources are not only preserved and archived but also available to the public for use by anybody.”

“Because of our partnership with the Borchert Map Library, we’ve been successful at providing digital images online to give immediate benefits to the community, while ensuring proper long-term care of the original artifacts,” said City Clerk Casey Carl, city of Minneapolis. “This project was a true win-win partnership for the city and the community.”