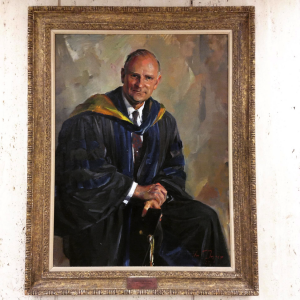 When you walk into that square library building on the west bank of the Twin Cities campus, you may have noticed a large painting on the first floor near the stairway. Wilson Library was named for the man in the portrait, O. (Owen)* Meredith Wilson, the ninth president of the University of Minnesota. The library opened on Sept. 23, 1968.

“Met” Wilson, as he was called, was born in Mexico and raised in Texas and Utah. He studied at Brigham Young University and received his doctorate at the University of California, Berkeley. In addition, he studied at universities in London and Germany.

At the University of Minnesota, he was the first president to reside at Eastcliff with his family.

Wilson’s support for a growing campus

Wilson’s administration oversaw the construction of over 40 new buildings due to expanding enrollment. Many of those were on the West Bank, including Social Sciences, Management and Economics, Blegen, and Anderson halls with their connecting tunnels.

Wilson was also responsible for making Minnesota winters a little less harsh on students. A new bridge was planned to replace the old one at Washington Avenue to keep the campuses connected. Wilson promoted a two-tier bridge with the upper level as a walkway to keep students warm crossing the river, which was agreed to by the highway department. The University paid for the enclosed walking area.

At the time, Walter Library was at capacity. A new library was needed to support the growing departments. Wilson’s support was instrumental to securing funding for the new library. 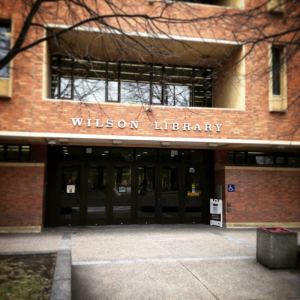 The library was built in 1968 at a cost of $8,868,045. In all, it had seven stories (two underground, four above ground, and a fifth floor with faculty study rooms and the building’s HVAC and mechanical systems). At the time, it included such features as an escalator from the basement to the plaza level, card catalog, smoking rooms (the glass-walled rooms on the second through fourth floors), a book lift, and a pneumatic tube system. It was the first fully air-conditioned building at the University!

Since then, the library has gone through several remodeling projects. The first Ethernet network connections were installed in 1991, and wireless connections were first available ten years later in 2001. The basement level coffee shop opened in 2007. The latest project, a remodeled first floor lobby, opened in December 2014. Today you’ll see a new service desk as well as expanded seating and collaborative study areas. The SMART Learning Commons on the basement level includes oversized monitors for collaborative study as well.