The U Libraries are full of information and sources for your upcoming papers and mid-terms. From cutting edge journal articles to unique and primary sources on historical events. Here are a few examples based on events in the news today and in the past. In commemoration of the 50th Anniversary of the historic marches from Selma to Montgomery and the Voting Rights act in 1965, here are a few items from around the U Libraries and our collections:

From the U Media archive and the Givens Collection–the playbill from 1986 from a play, Selma, produced by Penumbra Theatre in celebration of the first Martin Luther King, Jr. Day national holiday. 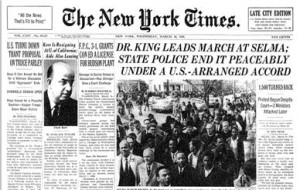 From The New York Times, articles (a.k.a. primary sources) from before, during and after “Bloody Sunday” in March 1965. 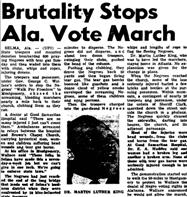 From our Black Historic Newspapers collection, from the Chicago Defender in March 1965.