At the Kautz Family YMCA Archives, we have been fortunate to work with one such community, the Chinese YMCA movement. In October 2014, with support from a grant from the University of Minnesota’s Global Programs and Strategy Alliance, I was able to accept an invitation to travel to China to help the Xi’an and Hangzhou YMCAs celebrate their 100th anniversaries.  The journey from Minneapolis to the Middle Kingdom (as it is traditionally called by the Chinese) is rooted in the YMCA’s long history of international work.

The American YMCA movement’s activity in China dates back to the late 1880s, when the Y’s governing body, the International Committee, sent a staff member named Luther Wishard there as part of the early efforts to expand the YMCA’s foreign work program. While YMCAs serving mainly expatriates had been operating in China as early as the 1870s, it was not until 1895 that the first Chinese YMCA was launched in the university town of Tianjin. The International Committee’s policy of stressing indigenous leadership, support and control appealed to the burgeoning nationalism of the Chinese and the movement took root quickly, adopting the motto, “to serve, not to be served.” 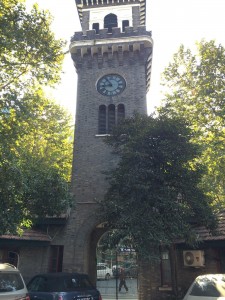 By the 1920s, YMCAs had been established in over 30 cities, with predominantly Chinese leadership. Many of these associations boasted purpose-built buildings, often constructed with financial and logistical support from the American YMCA. Educational programs — including English classes, lectures, and vocational training — were offered with great success. Physical training, including the introduction of many western sports and western-style sports competitions, as well as public health education, also featured prominently.

The Communist Revolution of 1949 abruptly ceased involvement by North Americans in the Chinese YMCA movement and brought the organization under suspicion and attack from the political forces in power, due to its western origins. Despite these challenges, however, a number of YMCAs on mainland China continued to operate.

A number of early Chinese Communist leaders, including Zhou Enlai, the man who went on to become the first Premier of the new People’s Republic of China, had connections with the YMCA and protected it from the worst of the reprisals. Following the Cultural Revolution and the subsequent adoption of more open policies, many of the YMCAs were able to reestablish operations and, gradually, to resume contact with the broader YMCA movement. Their survival, however, was at the cost of their historical records, very few of which remained in the wake of the purges and other stresses of that era. 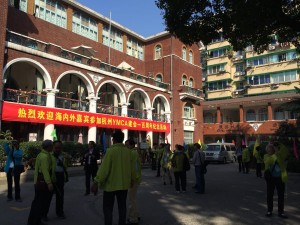 With the government’s adoption of more open policies in the 1970s and ’80s, the opportunities for the the Archives to connect with the Chinese YMCAs have flourished.  Fortunately, many records of the American involvement in the Chinese YMCA, including thousands of monthly, quarterly, and annual reports, copious correspondence, photographs, and other materials, have been preserved in our collections. In addition to chronicling the day-to-day programmatic, administrative, personnel, and logistical matters of the YMCAs, the material includes documentation of and reflections on many economic, social, and political events and challenges of the times. It also includes many records pertaining to the financing and construction of YMCA buildings.

Drawing on these resources we have been able to answer many questions for Chinese YMCAs about their origins and early activities. In at least one case we were even able to provide evidence they needed that they owned their building so that they could reclaim it for their use after it had been seized by the government for other purposes during the revolutionary period.

As the surviving Chinese YMCAs reach their 100th anniversaries, the Archives staff has experienced a fresh burst of interest in the records from those involved with the Chinese Y movement. Several of the YMCAs there have worked with us extensively to identify material that they could use to better understand their past and prepare for these milestone celebrations. Rather than just responding to individual reference requests, we have increasingly taken a more proactive approach, including digitizing major portions of the collection and making it freely available online and partnering with a Chinese University to publish printed volumes of the reports along with abstracts in Chinese. 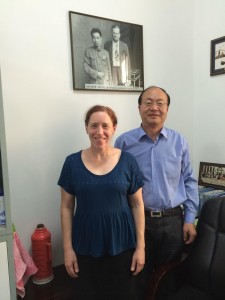 During my visit, I was able to reach out to leaders from other Chinese YMCAs who were also guests at the event and make them aware of the resources we we can make available to them. I also shared with them tools the Archives has developed to help local YMCAs in the United States preserve their own historical records going forward.

Guests also included leaders from YMCAs in other Asian countries that the American YMCA movement helped originate. One of these guests, National Council of YMCAs of Japan General Secretary Shigeru Shimada, had visited the Kautz Family YMCA Archives this past summer. The benefits of this relationship became evident when he described the impact that seeing the Archives had for him, and more than once expressed to the other guests his conviction that every YMCA general secretary in Asia ought to visit.

After the formal anniversary celebrations had concluded, the general secretary of the Hangzhou YMCA, Mr. Zhangdao Sun, asked if I had time to talk with him more about the Archives. He invited me back to the YMCA building there, one of the oldest in the country,  for a tour, tea, and conversation that ended up stretching well into the evening and becoming one of the highlights of the whole trip. Following the anniversary events, I went on to meet in Shanghai with staff from the National Council of YMCAs of China, many of whom are new to the YMCA movement and eager to learn more of its background, to share information about this history and the resources at the Archives.

The goal is more than just to respond to specific inquiries and immediate information needs, though that is certainly an important role the Archives plays. Through this outreach and the relationship we build with the people and organizations whose records we hold, we hope to empower them. Archives can do more than just document communities and function as storehouses of data.  We can also work with those communities to give them custody and control over their own historical legacy.