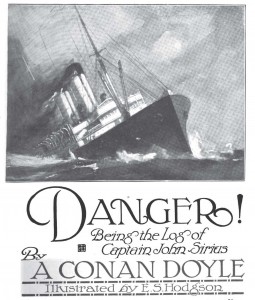 “It is an amazing thing that the English, who have the reputation of being a practical nation, never saw the danger to why they were exposed. For many years they had been spending nearly a hundred millions a year upon their army and their fleet….Yet when the day of trial came, all this imposing force was of no use whatever, and might as well have not existed.”

This opening quotation comes from a thought-provoking short story by Doyle, one I had not read before, and with nothing whatsoever to do with Sherlock Holmes. Instead, on the eve of what we now know as the First World War, Doyle took up his pen to warn fellow citizens of a possible danger to his country. This danger came in the form of the submarine, and its use in unrestricted warfare on merchant marine fleets carrying goods—primarily foodstuffs—to the United Kingdom.

Doyle’s plot is contemporary and straightforward. A small country, Norland, finds itself in a dispute with Great Britain over colonial boundaries. Events escalate over the deaths of two missionaries, presumably from the United Kingdom. The British, eager to protect their empire, issue an ultimatum, which expires in forty-eight hours. Norland’s King and Foreign Minister are ready to surrender and accept the British terms. However, Admiral Horli of the Norland navy and Captain Sirius, commander of a small submarine fleet of eight vessels, have other designs. They put their plan to the King and Minister, who, on hearing it, accept. The main Norland fleet will “be gathered under the forts of Blankenberg,” presumably the capital city, “and be protected from attack by booms and piles.” As Captain Sirius (the narrator of this tale) later relates,

I need not trouble you by telling you the measures which were taken at Blankenberg, since, as you are aware, the fortress and the entire fleet were destroyed by the British within a week of the declaration of war. I will confine myself to my own plans, which had so glorious and final a result. The fame of my eight submarines…have spread through the world to such an extent that people have begun to think that there was something peculiar in their form and capabilities. This is not so.

What follows is the Captain’s account, running over the next month, from early April to early May, in an unidentified year, but clearly placed in the near future. “I am not here to tell you the incidents of the war, but to explain my own part in it, which had such a decisive effect upon the result.”

I will spare you the details, and try not to spoil the story, except to note that Doyle wrote this fictional account with a distinct purpose in mind: to warn his country of impending doom and to offer possible solutions. It was not the submarine, in and of itself, that was the danger. Rather, it was what this, or other instruments of war could do to starve his country into submission, or, as he wrote in a concluding imaginary leader in the Times, to explain “the meaning and lessons” of this tale: “Had we endured this humiliation at the hands of any of the first-class Powers it would certainly have entailed the loss of all our Crown Colonies and tropical possessions, besides the payment of a huge indemnity.” Doyle never explicitly identified who he believed an enemy power might be, but he came close in identifying the Norland cause with that of Germany, in a scene where the Captain’s submarine surfaces in the English Channel.

When we rose, a large steamer flying the German flag was within half a mile of us. It was the North German Lloyd Altona, from New York to Bremen. I raised our whole hull and dipped our flag to her. It was amusing to see the amazement of her people at what they must have regarded as our unparalleled impudence in those English-swept waters. They cheered us heartily, and the tricolor flag was dipped in greeting as they went roaring past us.

Doyle’s proposals, given voice in the imagined Times leader, included: reformation of agriculture and trade policies to provide “sufficient food to at least keep life in her [Britain’s] population;” construction of “two double-lined railways under the Channel” to facilitate movement of goods and, presumably, armies; and “the building of large fleets of merchant submarines for the carriage of food.” Clearly, Doyle’s major concern was with having enough food to feed the nation during hostile times.

He didn’t have long to wait, or see his concerns come to life. A month after Doyle’s piece was published in The Strand his country was at war. In February 1915 German U-boats began attacking commercial targets. Three months later, in early May, the British passenger liner Lusitania was sunk, resulting in the loss of 1,153 passengers and crew, 128 of them American. German naval activities continued to ramp up until January 1917 when Germany formally announced the use of unrestricted submarine warfare.

I am not an expert on British agriculture or trade policies, so I do not know what impact Doyle’s story had on government policies concerning food or commerce during the war. It is interesting to note that The Strand saw fit to publish reactions to Doyle’s tale from “a number of naval experts” including seven British admirals. The longest response came from Mr. Fred T. Jane, founding editor of the long-running series of standard reference books on warships and aircraft, e.g. Jane’s Fighting Ships. As for Doyle’s support for a tunnel under the English Channel—an idea first suggested in 1802—it would take another eighty years before “the Chunnel” opened to rail traffic.

Why am I interested in Doyle’s tale? In part, my curiosity comes because I have always had an interest in “The Great War” or “The war to end all wars.” My grandfather was in the 54th Pioneer Infantry Regiment and spent two years in France and Germany. I have a spent artillery shell he brought back from the war, with “Verdun” scrolled across the top. Beyond familial interest, we’re coming up on the centennial commemoration of the opening of the war. One of the books I hope to read in the next few months is Christopher Clark’s The Sleepwalkers: How Europe Went to War in 1914. It came highly recommended from a friend and reader of these notes. I’m sure there are other titles you might recommend. 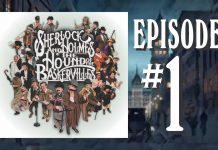 The play’s afoot — on air 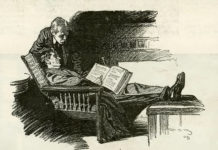