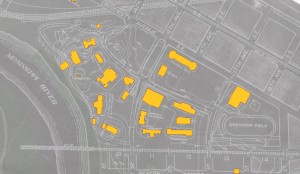 The Libraries’ new Campus History web application doesn’t exactly make history come alive, but it sure is fun. Ryan Mattke, head of the John R. Borchert Map Library at the University of Minnesota, advises that you see for yourself.

“To see how fun this is,” he said, “you can just hit play and watch the campus grow.”

But there’s much more here. Just take a few minutes and look under the hood.

Who ya gonna call … when natural disaster strikes in the library? 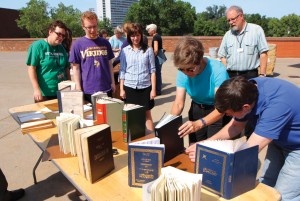 Not Ghostbusters–you call the Libraries’ Collections Emergency Response Team, a special team of library staff who completed intensive training in threats to collections such as a broken water pipe.

U of M new member of Dance Heritage Coalition

DHC is a coalition of American libraries, archives, and museums with significant collections in dance. With the addition of the University of Minnesota, there are 12 DHC members throughout the country. Each member organization selects its representative to serve on the board of directors, developing and initiating a range of projects to advance the field of dance preservation.

The Libraries has been awarded a $250,000 Institute of Museum and Library Services grant for the “African American Theater History Project.”

The funds will support the creation of an online search tool that will bring together digitized archival materials from leading libraries and museums across the country, including the Library of Congress, New York Public Library, the Smithsonian, Columbia University, and Tulane University Amistad Research Center.

The curated search tool will address African American cultural history, with a special focus on theater and the arts. The Libraries will also work with the Digital Public Library of America (dp.la) to contribute to DPLA’s collection of materials related to African American history. This two-year project began in January.

Read more about the IMLS grant 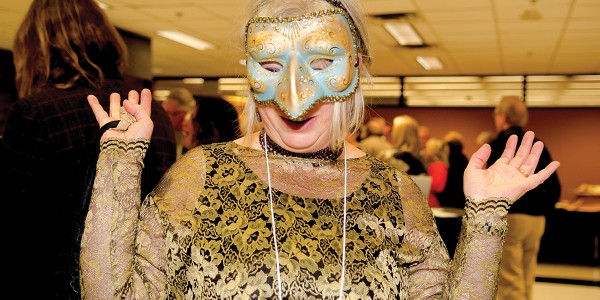 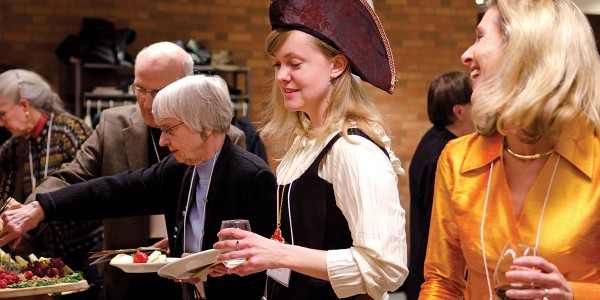 Nearly 200 guests enjoyed the evening, complete with medieval décor and costumed helpers with music provided by The Eddies. The items selected for the exhibit were curator and staff favorites, special gifts, and one-of-a-kind treasures.

The Bell Library, founded in 1953, supports education and research at the University of Minnesota, and provides community outreach.

“[The Bell Library] is a monument,” said Nabil Matar, professor of English. “This is an intellectual monument, a monument for the humanities. It’s a monument that should always be preserved because without that we do not know where we came from. And, then, who are we?”

The ambassador connects with kids

DiCamillo, whose archives are part of the Libraries’ Kerlan Collection, is the Library of Congress National Ambassador for Young People’s Literature. Von Drasek is curator of the University’s Children’s Literature Research Collections.

Care to test your wits with one of the final questions? They lie in the ultraviolet and correspond to a final state nf of 1 in the Rydberg formula. They are the only part of the hydrogen spectrum with higher energies than the Balmer series. For 10 points—identify this series of spectral lines not discovered by the original owner of Odie. See answer at the bottom. 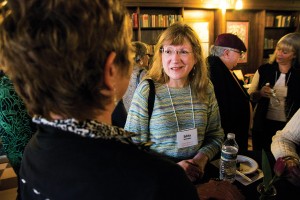 . . . were shared by more than 60 alumni of the University’s Library School, which was founded in 1928 and closed in 1984. Oh the stories! Oh the laughter!! And oh, how wonderful to see old friends and classmates!

The first reunion (of many to come) was held in the Upson Room of Walter Library on a rainy Sunday in April. Mark your calendars: The next will be held during Homecoming Week on October 17, 2014.

See photos of the alumni reunion

MNCAT Discovery features a single, “blended” search box from the Libraries home page at lib.umn.edu. The tool allows users to search and access the overwhelming majority of articles and other materials made available by the Libraries, as well as books and other Libraries holdings.

The new website has a flexible, responsive design that is optimized for smart phones and tablets. The website is also faster. “We wanted to make the site really fast,” said Cody Hanson, interim director of web development at the Libraries. “We want to make sure our researchers can get on with their business as quickly as possible — and we do that by making our new site load between two- and four-times faster than our old website.”

The Children’s Theatre Company has bestowed its historical archives – including production materials, directors’ notes, costume-design materials, and organizational records – to the University of Minnesota Libraries.

“We’re thrilled to accept the Children’s Theatre Company archives at the University of Minnesota,” said University Librarian Wendy Pradt Lougee. “This represents a key acquisition for our growing Performing Arts Archives,” Lougee said. The Performing Arts Archives also include materials from the Guthrie Theater, Penumbra Theatre, the Minnesota Orchestra, and the James Sewell Ballet, among many others.

Viewing the Downton Abbey exhibit at the Wangensteen Historical Library left graduate student Jeff Moulton feeling a bit queasy as he thought about medicine of the early 20th century.

“There are some things that are almost terrifying,” Moulton, a big Downton Abbey fan, said about some of the exhibit artifacts that include “a lot of pokers and tweezers.”

“I’m glad I live now,” said Emily Hagens, a Ph.D. student who co-curated the exhibit, “Downtown Abbey: Behind the Scenes of Health and Illness.” The exhibit ran through May 16.

University Libraries’ Mary Schoenborn and Lynn Skupeko were awarded the 2014 Librarian/Media Specialists of Merit at the State History Day Award Ceremony on May 3.

The two were honored for making a difference in the lives of kids through History Day, said Tim Hoogland, coordinator of History Day in Minnesota and manager of education outreach services at the Minnesota Historical Society.

“No library professionals are more deserving of this award,” Hoogland said to Schoenborn and Skupeko at the event. “You have consistently gone above and beyond the call of duty to help kids. Wilson library is becoming an agent of academic change because of your efforts.”

Renovation of the Wilson Library lobby started over and is scheduled to be complete during fall semester.

As part of the renovation, the SMART Commons has moved to the basement level and features several improvements, such as dual monitor workstations with larger tables, extra large monitor and table supporting up to seven people, four 27-inch monitors mounted on rolling carts to support small group work, and more open areas for supporting SMART Peer Learning Consultant Services.

Judges selected 1st, 2nd, and 3rd place in the 2014 Student Photo Contest, sponsored by the Friends of the University of Minnesota Libraries. A fourth award, the Student Choice Award, was given to the student who had the most Facebook likes for his or her entry.

Wendy Lehr, the celebrated Twin Cities actor, director, and teacher, presented “My Life in the Theater: I Always Said Yes!” at the Friends of the Libraries Annual Celebration in May at the University of Minnesota Rarig Center.

Lehr was a company member with the Children’s Theatre Company from 1966-1986 and served as associate artistic director and director of education from 1990-1998. Lehr has also worked with many other companies such as the Jungle Theater, the Guthrie Theater, and the Ordway Center for the Performing Arts, Park Square Theatre, Illusion Theater, the History Theatre, Theatre de la Jeune Lune, Theater Latté Da, and the Playwrights’ Center. 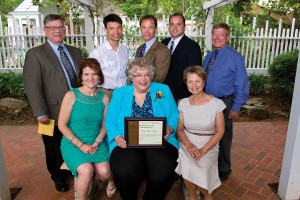 Berg was recognized for her more than four decades of service to the University, including her primary work with students, student employees, faculty, and staff of the College of Veterinary Medicine. She also has made significant contributions to the University Digital Conservancy project. Berg received the award June 3 from President Eric Kaler at a ceremony at Eastcliff.