Melanie Doherty is a Project Archives Research and Reference Assistant at the Kautz Family YMCA Archives. She joined the staff in February 2012 as a student assistant on a project to compile summary descriptions of collections in the YMCA Archives and stayed on after graduating in December 2013 to continue working on the project. This spring we invited her to utilize the knowledge of the collections she acquired through the project to curate of a small exhibit on a topic of her choice. The results are on display in the case outside the Archives through at least September 2014. Please stop by and take a look any time Andersen Library is open. 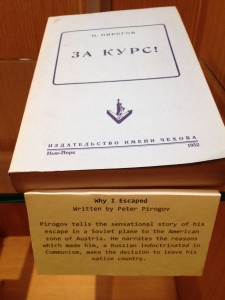 When I was given the opportunity to create an exhibit for the Kautz Family YMCA Archives I was very excited. I wanted to focus on a topic that really highlighted what the materials within the archive were able to express. I wished the exhibit to strike a chord with the viewer in a similar manner that a collection was able to strike a chord with me. I had worked with so many of the collections that I had what seemed like a million ideas. In order to narrow the exhibit down to one subject I focused on topics that had human interest at the heart of them but also showed great historical significance.

The exhibit narrates a story of the life of the Russian exile after the Russian Revolution and the importance of of reading material to those exiles. The Russian Revolution initiated a situation of turmoil for millions. Russia’s citizens experienced starvation and repression. Between 900,000 and 2 million became exiles, among them writers, artists, engineers and people from every sort of social and educational background. Many were committed to preserving the pre-revolutionary Russian culture and way of life while living abroad. The means to do this, however, was out of their immediate reach as most left the majority of their possessions behind.

At risk was an adequate education for the younger generation of Russian exiles and the survival of Russian intellectual ideas, philosophy and ideology, due to censorship. Many refugees did not speak the local language and often were unemployed or forced to take work that did not match their prior employment. Families could not educate their children as they wished because of language barriers and a lack of Russian cultural influences. After being forced to leave Russia due to a governmental ban on religious youth organizations, the North American YMCA saw the need to continue their work by serving the Russian exiles.

The North American YMCA founded the YMCA Press in order to assist Russian exiles with the preservation of their social-cultural existence as well as to allow them to gain further education and experience in their new lives. The YMCA Press, as well as other YMCA based Russian presses, the Chekhov Publishing House and Les Editeurs Réunis, worked to fit the needs, maintain the cultural identity of the Russian emigrant and secure non-Soviet Russian cultural history for future generations. The sort of texts that were printed varied, however the quality of life that the availability of these materials added to the Russian exile was immeasurable.

The Archives’ Russian publishing work files were very striking to me because unlike much of the YMCA’s international work, this project strove to preserve a waning cultural history and improve a people’s situation after their loss of home. This collection felt very relevant today with so many emigres worldwide, unable to return to their countries of origin. Historical collections such as this one give us valuable examples to learn and grow from when looking to our future. 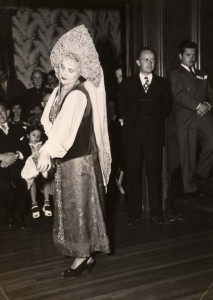 Through the exhibit I wished to paint the image of the Russian exile and the assistance offered by the various YMCA Russian presses. I looked to our next door neighbors in the Elmer L. Andersen library, the Immigration History Research Center, for some images. The images that they supplied illustrate Russian ceremonial culture, as well as the work and family life of the Russian emigre. I especially love the image of the Russian dancer who was performing at an International Institute of San Francisco event. I found the intricacy and detail of her costuming very striking.

Another goal of the exhibit was to provide a peek into the press industry through some of the many images of the Chekhov Publishing House in the YMCA Archives collection. These images show press employees hard at work as well as examples of a number of different volumes that were printed. One image shows an employee of the publishing house reading a manuscript with a Russian/English dictionary close at hand. This scene hinted at the effort that was required to publish accurate Russian language texts when Russian was not the publishers first language.

I also wanted to display some of the examples of print material by the YMCA Press and the Chekhov Publishing House within our collection. As it was all in Russian, a language which I do not speak, I mostly selected this material based on the appearance of the book. I did however find English language summaries for a few titles, including Stilled Voices- Poetry Behind the Iron Curtain, an anthology of Russian poets from behind the Iron Curtain, and Why I Escaped, a first-hand tale of Peter Pirogov’s escape in a Soviet plane to the American zone of Austria.

The exhibit also includes examples of correspondence demonstrating what the presses were able to contribute. Correspondence is the sort of item in an archive that captures the life of an individual at a certain moment in time. The letter that struck me the most was from a Priest, Stojan T. Andjelkovic. In this letter he says “…a book for me is the dearest and greatest consolation and pleasure.” This letter shows how a simple gift of literature was able to improve the lives of those touched by the YMCA’s Russian publishing houses.

The experience of working on this exhibit was so much fun. I enjoyed the ability to delve into this collection with a need to tell a story rather than to only summarizing it, which is my usual task. I was able to focus on some of the points of the collection that give it personality and really bring it to life. The personal, individual connection to history and how history relates to modernity is what inspires my love of historical research. I hope that I have been able to get some of this through to the viewer. I also hope that the importance of the YMCA Russian presses to the lives of the Russian exiles and to the preservation of Russian intellectual and cultural history can be seen through the selected material in the exhibit.