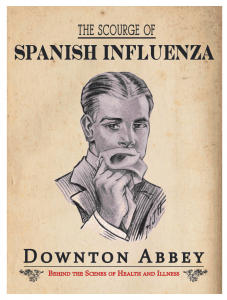 Medical themes are threaded throughout Masterpiece Theater’s wildly popular Downton Abbey, from Matthew’s temporary paralysis during the Great War to Sybil’s tragic death from eclampsia. Now, an exhibit at the University of Minnesota Libraries will illuminate the medicine of Edwardian England as portrayed on Downton Abbey.

“Downton Abbey: Behind the Scenes of Health and Illness” is open through May 16, 2014 at the Wangensteen Historical Library of Biology and Medicine. Using books and artifacts from the library’s extensive early 20th century collections, the exhibit explores such themes as:

The exhibit includes cookbooks, surgical manuals, and instruments; newspapers, photographs, and drawings; and clothing and other accessories from Edwardian England that highlight the experiences and concerns of 19th and 20th century medicine.

“The history of medicine is an exciting lens for the show’s viewers because it lends insight to both everyday and exceptional hopes regarding fears about the body, family, and community,” said Lois Hendrickson, co-curator of the exhibit.

The early 20th century saw numerous changes in medical practice, she said, adding that sanitation was greatly improved and surgeries were more successful. The medical profession itself was in the midst of a professional revolution, she said, because of a heightened interest in specialization and the decreasing status of general, or family, doctors.