Sometimes an opportunity to promote collections drops into our lap, out of the blue.  Occasionally such chances link our materials with surprising partners, those we’re not used to dealing with on a daily basis.  Such was the case when I received an e-mail note from Cathie Hunt, an associate director for the global cable/satellite sports television network ESPN in mid-September.  The University of Minnesota Golden Gopher football team was scheduled to play the San José

State University Spartans that coming weekend.  As television broadcaster for the game, ESPN had an interest in things beyond the stadium.  (The title for this post is a takeoff on the ESPN College Football tagline.)  As I soon discovered, this Saturday gridiron contest provided new venues of exposure for our collections and the Libraries, invited new connections with the University’s Athletic Department, and confirmed the importance of our online presence.

Cathie’s initial note was short and to the point: “I am the Associate Director for ESPN’s football broadcast this weekend. When we come to a University we like to show something that is different and unique about the school and the campus. The Sherlock Holmes collection is something that I am sure our viewers would love to see.  If it is possible, I would like to have our photographer come to the library on Friday morning and shoot some of this collection.  He would only need an hour at the most to set up and shoot.  Please let me know if this is feasible.”

My first response, before answering Cathie, was to check with the Libraries’ Director of Communications, Mark Engebretson.  We are encouraged to contact Mark whenever an approach is made by media outlets to ensure we’re following correct protocol (and to keep him in the loop on these various contacts).  Mark quickly responded and urged me to go ahead and make the arrangements.  He alerted the University’s News Service about ESPN’s interest.  I also notified Wendy Lougee, University Librarian; Kris Kiesling, Andersen Library director and head of the Archives and Special Collections department; and Rob Strnad, our building manager.

Having taken care of all internal notifications, I enthusiastically responded to Cathie: “We’d be delighted to have an ESPN photographer come on Friday to shoot some of the collection. Just let me know what time your photographer would like to set up and shoot and I’ll be sure to be available.”  Cathie thanked me for a quick answer and added a thrilling response.  “I am extremely excited that you will be available for our photographer on Friday. We are setting up the schedule for shooting things tomorrow so I will be able to give you an exact time for him to arrive….I will call you tomorrow and we can discuss the specifics.”

Cathie and I worked out the details.  I was to meet “Dutch,” the ESPN photographer, and his assistant in front of Wilson Library at 10:30 Friday morning.  Cathie also asked for additional information that might be useful to the producers and game announcers.  “It can be as generic as you want or if it correlates with what Dutch is shooting that is good too. If there is a couple of ‘rare’ collectibles that he can shoot that would enhance the montage of pictures that also would add to the uniqueness of the collection.”  I sent her specific blurbs on the Holmes Collections and more generic material on Special Collections/Archives and the University Libraries.  I also threw in one other possibility that might interest her.  “If we have time, we can walk a couple hundred feet to Andersen Library where the collection is housed 90 feet underground in environmentally controlled caverns.  Dutch might be interested in some cavern shots.”  Pitching her a further idea (after getting permission), I whipped off a quick note: “crazy idea for the shoot, if you want to pursue: the underground caverns are about 2 football fields in length, 24 feet high, 70 feet across. Maybe a couple of players tossing the ball amidst the stacks?”

Both Cathie and Dutch were intrigued by the caverns.  As for players tossing a football underground, she replied: “I’ll throw it past my producer.”  In the end, we didn’t get the players or tossed footballs.  But Dutch seemed pleased with his shots.  After shooting Holmes items in Wilson Library–including our permanent exhibit of the sitting room at 221B Baker Street–we ambled over to Andersen Library, stopping briefly at the head of the pedestrian bridge running across to the East Bank campus to capture footage of students walking to and from classes.  Once in Andersen, Dutch shot a few items from the Holmes exhibit before descending via elevator to cavern level.  In one of the caverns Dutch was able to capture some exciting “dolly shots” of the stacks.  The entire shoot, as promised, lasted about an hour.

After parting with Dutch and his assistant, I informed Cathie that we’d finished the shoot, that I had some still images of the caverns (if needed), and that Dutch thought the cavern footage might work well as another segment, aside from the Holmes material.  I also sent her additional information about Andersen Library and the caverns, for use by the announcers.  She thanked me for all my help with the shoot and also let me know that one of their “tape guys” was “a huge Sherlock Holmes fan” and was coming over to the library on his lunch break to take a look at the collection.  I followed with one last request for a copy of the raw footage taken by Dutch.  Happily, she said a copy could be provided and that I could stop by the production truck that evening to pick it up. 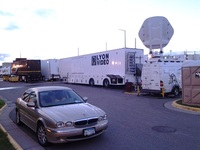 As the sun set Friday evening, I walked across campus and found the production trucks parked east of the football stadium.  Cathie was not there–she had a production meeting–but in communications later that evening we arranged to meet early Saturday morning at the truck.  At 5:30 on game day morning I returned to the production trucks and soon found Cathie at her desk, facing a wall of television monitors and other production equipment.  I was tickled to see, if ever so briefly, this side of preparing for a football game and was amazed at all the people up and about so early on a Saturday morning: television crews, security personnel, vendors, and even fans setting up to tailgate before the game (with kickoff scheduled for 11am).

I couldn’t watch the game as I had a previous engagement to speak at the Minneapolis Institute of Arts later that morning, and so relied on social media to keep me informed if and when the library footage was used during the broadcast. During the shoot, Dutch told me that the clips were scheduled for the second quarter of the game, but that this could change depending on how the game unfolded.  My Facebook and Twitter informants later confirmed the appearance of two short clips during the game.  I was thrilled.

This experience reminded me of the important roles played by our Internet presence and with social media as part of our outreach toolbox.  ESPN discovered our Holmes Collections online.  Web-available text and images provided producers and announcers with important contextual information as they prepared for the game.  From the time of my first encounter with Cathie and ESPN, I posted comments on Twitter.  Some of my “tweets” were “re-tweeted” by others, including Sherlockians, the Athletic Department, other libraries, and colleagues.  This gave us even greater exposure; the re-tweets amplified our message.  And what is that message?  The University is home to Golden Gopher football and world-class libraries, archival, and special collections, housed in state-of-the-art facilities.  College football is a huge and powerful enterprise, gathering many fans.  We were pleased to be a part of that energy on game day and thankful to ESPN for the opportunity.  Perhaps those brief clips, played during a break in the action, along with my “tweets,” gathered a few more Libraries/Archives/Special Collections supporters.  Go Gophers!  Go Libraries!  Game on!  Ski-U-Mah!